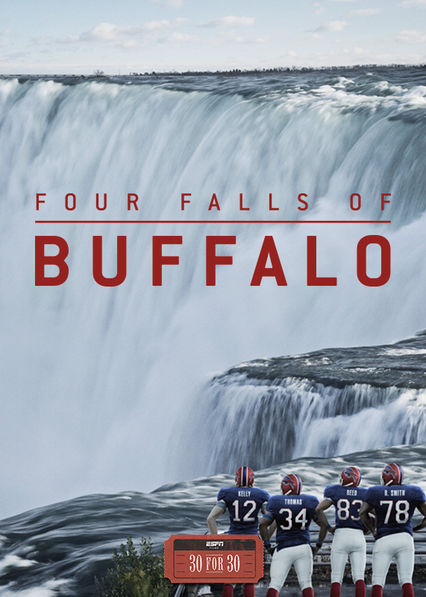 It’s easy to see why Ken Rodgers’ retrospective has been described as a love letter, not just to sports fanatics but to the city of Buffalo itself. Pro football has a certain stigma attached to it in this part of the country. The Bills are more freely associated with blown opportunities than they are with blowing out their opponents. Four Falls of Buffalo chooses to block out all that noise, focusing on the positives rather than the negatives — not an easy thing to do all things considered.

The film recounts a period in the early 1990s in which the Bills managed to make four consecutive Superbowl appearances. Unfortunately they lost every one of those games and typically in heartbreaking fashion. Influenced by nostalgia and reverence for accomplishments the rest of the nation dismissed instead as embarrassments, the tone often strikes deep chasms of melancholy and the story, much like a devoted fanbase that braves frigid winter temperatures for the sake of a good pre-game tailgate, longs for different results in the Wins/Losses columns. But as the cliché goes, if you were to ask members of the ’91-’94 squad if they would do it all again, you’d receive a resounding response in the affirmative.

After all, it’s not every season you see last year’s Superbowl “losers” return to the big stage. And then do it again, and then a third time. Four Falls of Buffalo shows how history can be interpreted in lots of different ways, and those recounting it here show impressive levels of stoicism as former players and executives alike open old wounds by reliving the moments. Rodgers works through the timeline chronologically, focusing on the unique situations that arose on each Superbowl occasion: missed field goal opportunities, mysteriously disappearing helmets, excessive trash-talking, critical missed tackles.

Along the way actor William Fichtner, a Buffalo native, steers us through the major events that shaped the era. Viewers are invited into the personal and professional lives of this rich fraternity of football talent. Here are but a few stand-outs:

Four Falls of Buffalo develops into a powerful testament to the pride and character of a community long plagued by hardship — a not-so-great economy, bad weather, even worse football. Season in, season out Buffalo endures. Looking back, the ’90s were comparatively an oasis amidst a sea of mediocrity. No one on the current roster was even in the league the last time the Bills saw a post-season. Indeed, many dark days have followed since. And they will continue to come.

But silly little things like “losing relevance” and “credibility” in terms of how they have stacked  up against the competition ever since don’t really seem to bother Bills fans. It still hasn’t really stopped them partying in hot tubs in near-subzero temperatures before games. That’s a spirit no force of nature, not even a bullheaded NFL commissioner can extinguish.

Recommendation: For Buffalo Bills fans, it’s a must-watch. The tradeoff for reliving painful memories is watching a film treat your hometown/city/whatever with the respect and dignity it deserves. It also is a good one to watch to gain a deeper appreciation for the sacrifices professional athletes make. So often sports are dismissed as trivial events, and perhaps in the grand scheme of things they are, but Four Falls of Buffalo is a great story, one that has much to offer even casual fans. (Full video included below . . . with apologies in advance for the quality of the audio.)