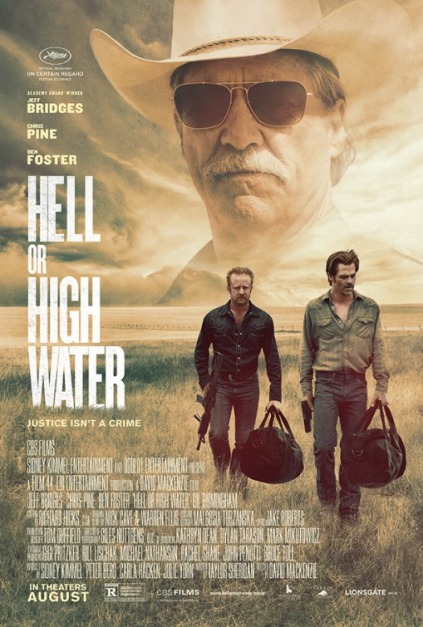 The day after you’ve watched something is probably not the time to proclaim that thing an instant classic. It would be wise to allow the infatuation phase to run its course before declaring your undying love for your partner. Unfortunately for me, I trade in hyperbole and sensationalist journalism so I have a very hard time calming down when I see something as enjoyable and well-crafted as David Mackenzie’s hybrid post-modern western/heist thriller.

Contrasted against a fairly weak summer slate of cinematic offerings, perhaps Hell or High Water is destined for a spot on the top shelf it might not have earned in another year but there’s no denying this is a film crafted with care and precision and featuring some of the year’s most enjoyable (read: believable) performances in a leading trio featuring Chris Pine, Ben Foster and Jeff Bridges as surly West Texans caught in a fascinating, morally complex game of cat-and-mouse (okay, cops-and-robbers if you want to be more accurate).

Two brothers — the divorced Toby (Pine) and ex-con Tanner (Foster) — set into motion a master plan to save their family’s farm from foreclosure by relieving a string of Texas Midland Bank branches of large sums of cash. These are the very banks that have been slowly but surely milking the Howard clan dry for decades. Despite their efficiency and a knack for finding new getaway vehicles, they soon find themselves on Marcus Hamilton (Bridges)’s radar, a local ranger on the verge of a long-overdue retirement. He’s hungry for one last chase and strings along for the ride his half-Mexican, half-Native American partner Alberto Parker (Gil Birmingham).

All goes according to plan until the brothers Howard hit a bank in Post, where the locals aren’t so submissive, despite Tanner’s best efforts to terrorize. (An unsettling yet frequently amusing psychopathy renders his criminal history entirely unsurprising. In this world there aren’t good cops/bad cops, there are good robbers/bad robbers and Tanner is decidedly more the latter.) Unprepared for resistance, they find themselves scrambling to escape a bloody scene that turns a once-righteous deed into an unintended murdering spree. All the while the rangers remain only a half-step behind, distracted only by the fact Marcus is fated for a rocking chair and greener pastures come the end of the week. The two narratives, compelling in their own right, eventually coalesce into a spectacular, oft unpredictable showdown that eschews traditional heroics and villainous archetypes. Think No Country For Old Men meets Robin Hood.

In a film filled with stellar acting turns, Pine’s quasi-transformative, ski-mask-wearing thief might just outshine the rest as his bedraggled countenance bears the brunt of the film’s moral quandary. Toby’s obligations to family — a financially struggling ex-wife and two teen boys — trump any obligation to abide by the law of this crumbling wasteland, a place where old granny’s fixin’ to blow ya off the front porch with her 12-gauge just for trespassin’. (That particular scene doesn’t happen but you can imagine it happening.) A place where the hustle and bustle of cities like New York and L.A. may as well be happening on another planet. Pine finds much room for personal growth in a script that believes in full-bodied characters and thoughtful story development. His devotion to his sons may justify a few smooth robberies, but does it justify the violence later on? How far should a person go to protect the ones they love?

Hell or High Water isn’t simply a case of an amateur robbery gone awry, although there is very much an element of bumbled professionalism at play. Think of these guys more as skilled amateurs, dabbling in the art of robbing from the corrupt and redistributing to those who are destitute. What inspires their actions is very much an indictment of corporate America and how that unstoppable locomotive frequently flattens any poor sod who happens to be standing on the tracks (i.e. anyone who has been unfortunate enough to put their trust in banks who consistently loan money, their money, to others who can’t possibly afford to repay the debt). Indeed, if you wish to dig deeper into these scenes juxtaposed against a rugged, wildly unpredictable American west, you’ll find hints of Ramin Bahrani’s 99 Homes as well. The pain. The outrage. Tension’s palpable, manifested especially in Toby’s final confrontation with a ranger who thinks he has him figured out.

Hell or High Water is impeccably performed, a reality reinforced by the brilliance of Taylor Sheridan’s screenplay, one that allows the entire cast to put their best cowboy boot forward. Even bit-parts such as a stubborn waitress who refuses to hand over her $200 tip as evidence because she has a roof to keep over her and her daughter’s heads and an elderly local who ain’t threatened by “thugs” become precious commodities. Bridges doesn’t really need the pampering but he’s par excellence. Amidst a rather bleak mise-en-scène, Sheridan finds ways to wring out a kind of naturalistic, borderline farcical sense of humor that assures levity while never distracting from the more shocking drama that awaits in a climactic stand-off. A bickering repartee between two sheriffs drives the entertainment value sky-high, while Foster runs away with his role and in all the best ways.

You might describe the portrait as stereotypical of the image non-locals have already painted in their mind of a place they perceive to be backwards and lawless. This place is hostile and the people tough, resilient and pretty stand-offish. But the film isn’t  so reductive as to parody life in these parts. It focuses upon real people living out real lives in the only way they know how, desperate to make something work in a nation described in the Pledge of Allegiance as undivided, with liberty and justice for all. The ever-captivating mystery invites us to form our own opinions of these people and communities. And suffice it to say, and while difficult at times, it’s best to reserve judgment until the very end.

My judgment is thus: Hell or High Water is one of the most enjoyable, entertaining and satisfying films 2016 has to offer. By turns nostalgic for a bygone period in cinema — that of the classic John Wayne shoot-em-up — and hungry to forge new frontiers with a riveting story that, while not categorically unpredictable, explores boundaries few films bother exploring anymore. It’s a grand adventure, something that will undoubtedly offer up something new to discover upon repeat viewings. This is how you make movies, folks.

Recommendation: Hell or High Water, an uncommonly (and unexpectedly) solid bit of modern western action, refuses to stoop to the lowest common denominator of reducing drama to bloody gunfights and cheesy quips. It’s a heist film executed almost to perfection. Fans of the cast are sure to love it, particularly Pine who continues to show he has more talent than just fulfilling an iconic leadership role on the U.S.S. Enterprise. This is undoubtedly his best work yet, slurry southern drawl and all. And I hate to keep making Star Trek comparisons, but on an entertainment scale, Pine’s misadventures here are far worthier of your time. This goes beyond where many modern westerns have gone before. Two Roger Ebert thumbs up.

19 thoughts on “Hell or High Water”