Sausage Party represents Seth Rogen’s strongest screenwriting effort since Superbad. It’s been even longer since he’s been this charming in a lead role as well, and he plays a six-inch-long frankfurter. Or sausage, wiener, whatever. He’s a real hot dog in this outing, a riotous, deliriously perverse bite of modern satire that will in all likelihood cause you to think twice the next time you’re thumbing through greens-turning-brown in your local Wal-Mart.

In the world of Sausage Party, Wal-Mart would be the Warsaw ghetto for perishables. In the world of Sausage Party the Food Pyramid takes on an entirely new meaning, a reality that’s manifested brilliantly via anthropomorphic food groups. There’s hierarchy and a universal belief system that shoppers are Gods. Food items believe they’re destined for great things once they’re Chosen, that they’re headed for a place called The Great Beyond where they’ll enjoy an eternity of being loved and treated like royalty by the human that rescued them from their prisons/shelves. A place where a sausage like Frank (Rogen) looks forward to slipping inside a nice, warm bun. A place where an Arabic flatbread named Kareem Abdul Lavash dreams of being greeted by 77 bottles of extra virgin olive oil that will help him stay lubricated and not dry out and be nasty and shit.

Broader arcs, involving Frank’s quest to save his sweet friends (and even salty foes) from continuing to be blinded to a horrible reality — food gets eaten, not laid — and Brenda’s determination to not act on her own sexual urges in fear of upsetting the Gods, are not exactly revelatory. Nor are the main beats delivered en route to one of the most ridiculous afterparties you are likely to ever see. (Yeah, This is the End may have been blessed by the Backstreet Boys but you’ve never seen food porn until you’ve watched this movie.) Because the story is rather store-brand generic, you’re left sort of worrying if there is a way Rogen and company can wrap things up without cooling off completely or melting down or some other food metaphor that suggests deterioration.

But there is no need to worry. At all.

And broad arcs be damned by the way. Getting lost in this supermarket is just way too much fun. There’s so much to see and do. Rogen, once again reunited with Evan Goldberg and aided as well by Kyle Hunter and Ariel Shaffir (the latter two co-wrote The Night Before with Goldberg, a rare case in which Rogen did not share writing duties), has crafted a genuinely hilarious and heartfelt film that manages to strike a near-perfect balance between satire and sobriety. One wouldn’t necessarily think Sausage Party has any right to be stepping into arenas like proving the existence of God, thereby the purpose of religion, or that packaging certain foods into certain aisles could be viewed as segregation but we should never downplay Rogen’s creativity.

In this adventure there is strength in numbers. That applies both to the mission Frank and friends find themselves embarking on as well as to how we’re able to connect with this strange little world. Frank is joined with varying degrees of hesitation by fellow wiener Barry (Michael Cera), who suffers from serious confidence issues; Frank’s love interest, the curvaceous bun Brenda (Kristen Wiig) and two squabbling neighbors from the International Foods Aisle in David Krumholtz’ Lavash and Edward Norton’s argumentative bagel Sammy (I still can’t believe that was not the voice of Woody Allen). The diverse selection of characters makes the watch more dynamic and energetic. Nevermind the fact that mainstays like Ketchup, Mustard, apples and oranges are wholly unoriginal, they don’t really lend themselves to comedy. And even though a hot dog does take center stage, brilliantly the summer grilling classic is broken down into two distinct characters. And of course we know why.

Food puns abound and as is expected, ethnic, gender and religious stereotypes play a role in deciding which items we are going to spend time with (for example: the non-perishable items are colored as wizened old Native Americans who have seen it all and it’s no coincidence that the film’s primary antagonist is a Douche named Nick Kroll. Er, played by Kroll, rather . . .). Incensed after Frank cost him his chance to go to The Great Beyond during a shopping cart collision, Douche sets out on a murderous vendetta to take out the wiener (and bun) responsible for not only the missed opportunity but his new physical deformity. (In this reviewer’s opinion we venture a little too deep into TMI territory when watching him mentally breaking down, mourning his lack of purpose. And we really could have done without 90% of Kroll’s brutal dude-broisms.)

It wouldn’t be a comedy from the Rogen-Goldberg school of puerility if it doesn’t make you feel at least a little guilty for laughing at some of the things you end up laughing at. Even still, Sausage Party (hehe) finds a number of ways to justify genre-defining tropes like making sex jokes out of literally everything. Wiig brings strength, courage and conviction to the part of a sexy piece of bread. Some things will never change though, as even here Rogen’s every bit the pothead we’ve come to love him for being as he finds room for a scene where a wiener gets roasted with a can of water and a gay Twinkie, and he does it without disrupting the flow of the narrative. The characters are well-defined and each have individual motivations for survival, which is critical in helping us actually “buy into” the situation at hand. (Let’s get real: we never take any of this seriously but we take it far more so than we thought we would when the project was first announced.)

Sausage Party is classic Seth Rogen-Evan Goldberg. It’s rib-ticklingly funny from start to finish, with only a few brief moments where all action comes to a halt in favor of more somber reflections on the state of life in a grocery store that’s about to erupt into civil war. You’ll find almost every alum from previous Rogen-Goldberg offerings here, and, hidden behind the guises of ordinary foods, they become icons. This is far too fattening a meal to keep having, but damn it all . . . why does fat have to taste so good? 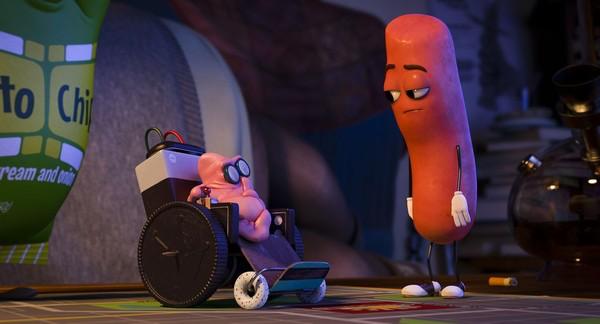 Recommendation: Irreverent, profane, over-the-top, delirious, and bizarrely heartwarming. Sausage Party uses anthropomorphism to its advantage and then some, creating memorable characters out of mundane food items and giving them distinct human personas that we can identity with and care about. (Obviously some more than others.) The rules of course still apply: fans of Seth Rogen’s sense of humor need apply while all others who aren’t big on the guy probably won’t find much mustard to squeeze out of this one. Visiting the supermarket will never be the same again, and I think that more than anything is the mark of an effective comedy.