There will never be another quite like the 1985 Chicago Bears defense. Or their offense. Or their coach(es). Or their cult of personality. If you’re from the area you probably don’t need the reminding, but Jason Hehir’s surprisingly moving documentary makes it abundantly clear to the outside observer that times have certainly changed.

Today fans are expected to embrace quarterback Jay Cutler, a Vanderbilt alum who looks like he might cry at any given moment. Sure, the guy’s built Ford tough but I’m convinced neither he nor the cast that surrounds him is as entertaining as the freak show the mid-80s spawned. Granted, Cutler is also no Doug Flutie. Under the thumb of head coach Mike Ditka and his defensive coordinator, the late Buddy Ryan, the Bears were less of a sports team than they were a hit squad powered by a trifecta of brute athleticism, mental tenacity and celebrity swagger. There was no pretense about them; they were the real deal, asserting their dominance throughout an historic regular season campaign and an even scarier post-season run that netted the great city of Chicago its first and so far only Superbowl victory.

The ’85 Bears, narrated by Vince Vaughn (who also executive-produced), is a love letter to those glory days, gathering together the surviving members of the team (may Sweetness rest in peace) for a candid chat about how they viewed themselves as young, emerging stars as well as their thoughts on the legacy they ultimately shaped. There’s a lot of the banter and inside joking that one expects from former players reliving their heyday — the way Hehir’s able to cozy up to a group of guys who have never seemed so vulnerable is a major factor in the film’s appeal — but undoubtedly one of the most intriguing aspects is the running discussion about the Bears’ unique coaching situation. What happens when you have two alpha males jockeying for a position of authority?

One would naturally assume nothing but dysfunction. In this case you’d assume incorrectly. In this case you get the formula for establishing a championship caliber team. And yeah, okay, a little dysfunction as well. Ditka vs. Ryan: a heavyweight bout, a battle of contrasts forged out of the former’s gruff, urban machismo and the latter’s rural southern roots, one that resulted in an oft-icy tension between the two on and off the field. Players recall Ditka becoming irked by Ryan’s insistence that weekly practices assume the same level of physical intensity actual games demanded. Ditka didn’t deem it necessary for players to sustain injuries during practice, a point of view that is as understandable as Ryan’s, who believed the only way to victory is through militaristic discipline and routine. (After all, his ’76 – ’77 Minnesota Vikings didn’t earn the nickname ‘Purple People Eaters’ because they stood around crocheting during scrimmages.)

The ’85 Bears feels more like a family reunion than a sports documentary. Relationships trump all, be they ones characterized by conflicting egotism or remembered for their controversial nature. If you’ve never met Jim MacMahon, the successor to Walter Payton (according to some, the greatest Bear that ever lived) and a BYU alum, wait until you get a load of him here. MacMahon’s infamous appearances at press conferences with a beer in hand or his off-hand comments about how people in New Orleans are all ugly and dumb may have earned him a certain reputation, but his contributions on the field spoke for themselves . . . even if his habit of improvising plays routinely frustrated Ditka.

Then of course there’s Mike Singletary, who now finds himself shouldering assistant coaching duties for the recently relocated Los Angeles Rams. Many of the interviews are information-dense and insightful enough on their own but it’s Singletary’s recounting of a once-turbulent relationship with Ryan that gives the film a beating heart. Watching him visit Ryan at home as he deals with increasing health problems is both touching and a reminder that football is more than a game. It is family. And good luck keeping a dry eye when Hehir exposes the handwritten letter Ryan wrote to his players. We also meet William “The Fridge” Perry, who remains to this day one of the largest men to ever don a football uniform at 6′ 2″ and 335 pounds. Well-spoken and extremely amiable, Perry’s demeanor is the epitome of, in MacMahon’s own words, the “big, happy fat guy.”

The ’85 Bears makes it clear no opponent looked forward to dealing with them. If other rivals — namely Bill Walsh’s San Francisco 49ers and the Windy City’s BFFs the Green Bay Packers — claimed they happily embraced the challenge of solving Ryan’s smothering defense or MacMahon’s ability to change plays at will while maintaining a high completion percentage, they were lying. Few, if any, teams looked forward to getting broken the way the Bears broke people. Their physical brutality all but locks the narrative in a time capsule, particularly as the league today continues to feign a stronger interest in advocating for the well-being of its players, both active and retired. One can’t help but think that such an evolution has naturally come about as a direct result of this epic chapter in Chicago’s storied football history. 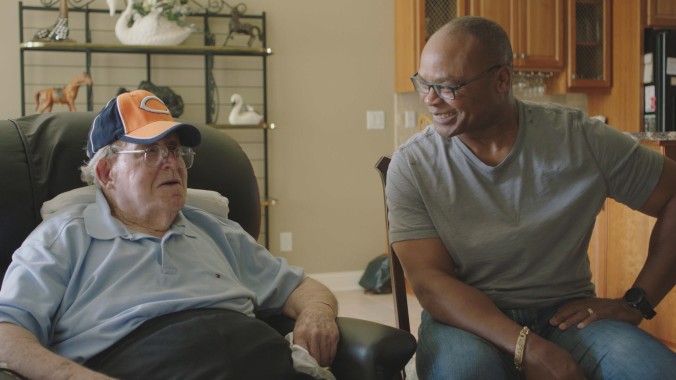 Recommendation: Thoroughly entertaining and moving in equal measure, The ’85 Bears is much more than a film about a rare collection of football talent. It is about legacy, about pride and about how sports bring people together. I absolutely love this one. One of the best ESPN films has to offer. Definitely seek this out if you come to the realization that this chunk of NFL history is one of your blind spots.

Quoted: “You know when there’s a pack of wild dogs, if one of them is mean, they’re all going to be mean. Guys are getting their asses handed to them out there.”