I am convinced the French marketing for the third Purge film (see above) is the most responsible form of it we have. The Purge: Election Year manages to be as inane as it looks and here is a movie poster that pulls no punches when it comes to revealing the truth. Cheap-looking and tacky the movie may not be, but it is unconvincing. Often hilariously so.

Though there are no Donald Trump masks involved (surprising, given writer-director James DeMonaco’s affinity for being overt) there is no doubt that the third Purge is intended as his own State of the Union address as it applies to a country being torn apart from the inside by mass shootings, gang and race-related violence and other forms of 21st-Century-friendly terms like ‘terrorism.’ Election Year is now, it is eminent and it is, supposedly, urgent. And so the French movie title starts feeling apropos.

Previous installments — one which took place entirely within the confines of an upper-middle class suburban abode and the other upon the streets of Los Angeles — worked tirelessly in addressing the growing divide between the have’s (the one-percenters of this fine country) and the have-not’s (everyone else in comparison) by creatively demonstrating the rage that festers within a 12-hour period one night out of the year. We’ve come to understand that purge night, rather than being a means for the American people to cleanse themselves of any sort of violence, is just the government’s way of shedding the nation of its burdens: the weak and the poor. A third installment hypothetically could add depth to this bleak, dystopian portrait of government-sponsored terror but what eventuates are just echoes of the themes it has hastily carted out on a dolly since the first round.

Once again we’re set in the near-future and purge night is upon us. Wait, let me back up a little bit. We first witness the events that inspire a young Charlie Roan (Elizabeth Mitchell) to become a Senator for good. Eighteen years after watching her entire family get murdered at the hands of a lunatic purger, she’s campaigning for the Presidency, vowing to eliminate this terrible night once and for all. Such a devastating loss drives the woman’s powerful but dangerous idealism. She has to win the election and wrestle control of the country away from the New Founding Fathers, but she also refuses to use murder as her path to victory as that wouldn’t make her any different from those who purge.

Frank Grillo returns as former police sergeant Leo Barnes. Once he’s in the picture, the film picks up in both the excitement and intensity departments. After surviving the horrendous events of Anarchy, Barnes has signed on as part of Senator Roan’s security detail and finds himself this time protecting a highly valuable asset as the New Founding Fathers have decided to take a firmer stance against opponents of the purge. They do so by revoking high-level official’s security Level 9 million-whatever clearance, a.k.a. their immunity to the lawlessness of the night. The Senator of course would prefer to wait the night out in her own home. Leo doesn’t think that’s a smart idea; it’s not. Soon we’re back out on the streets after a betrayal. Ya know, the usual.

Leo once again is surrounded by a group of citizens of indeterminate firearm-wielding skill and whose political leanings essentially boil down to “F**k whoever believes in the purge.” Meanwhile, a resistance group is forming somewhere in downtown Washington and there begins to breed a new kind of morality to the violence. But Leo’s gang ain’t like that; they’re comprised of proud deli owner Joe (Mykelti Williamson), his assistant and Mexican immigrant Marcos (Joseph Julian Soria), and a tough-as-nails EMT named Laney played by a fun Betty Gabriel — she’s arguably the film’s best offering beyond Grillo.

Election Year finds the city center of Ridiculous soon enough. We’re slowly pulled into the world of anti-purgers gathering in secrecy at some undisclosed (even in this review) location, preparing to wage war against the NFFA, namely Executive Douchebag Caleb Warren (Raymond J. Barry), the ring leader whose vileness must be measured by how many nasty words he can fit into one monologue. That’s the kind of lazy writing that has become a frustrating pattern in this franchise. DeMonaco’s creation has this fascinating psycho-social science dynamic that routinely gets left behind in favor of tired genre tropes and subpar acting (and directing).

The major offense here though is that three provides entirely too much déjà vu. DeMonaco attempts to expand the scope of the narrative by including a terribly ill-advised subplot in which ‘murder tourism’ has become a thing. Apparently it’s not enough that everyone in America is out in the streets killing each other to death; now we have an influx of South Africans (sorry Zoe; Natasha . . . ) coming stateside just to kill people. Don’t laugh (it’s okay, I almost did). The fact that the purge has caught on internationally and is now being marketed as a tourist package is just silliness defined.

Come to think of it, much of this franchise has been just that. Take a look at any number of those peculiar seance scenes in which small groups of well-dressed caucasians gather and either make a sacrifice or just repeat the phrase “purge and purify” ad nauseam (actually, it’s usually both). I look to those moments for an encapsulation of everything The Purge has been: pure nonsense and half-hearted attempts at profundity. Excuse me while I go purge all of my disappointment from memory. 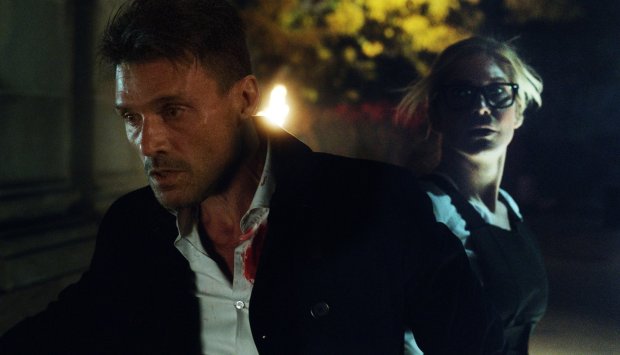 Recommendation: Gee, I wonder what the director’s stance on gun control is. The amount of mileage you get out of The Purge: Election Year (or as I prefer, American Nightmare 3: Elections) will depend on how much you enjoy just being stuck in this particularly dark universe. There’s no doubt DeMonaco and his cinematographer have crafted a unique visual identity but in terms of story they simply never even try to attain the heights their unusual, intriguing premise(s) suggest. You can always count on Frank Grillo though and paired up with Elizabeth Mitchell’s Senator he is better than ever. The rest though leaves a lot to be desired and I don’t know if I want to sit through more.