Have you saved the date for the Stangle wedding yet? There’s really no need if you don’t typically RSVP for the raunch, for the kind of testosterone-induced antics that invariably wind up with someone’s penis in something it should not be, good-looking women tripping on MDMA and frolicking with horses and a happy ending that materializes out of thin air. I’m not sure if I’m generalizing anymore.

The package looks a bit different because the title is long (though uncreative) and the cast and crew are mostly up-and-comers. We haven’t yet seen anything from director Jake Szymanski, who has a rather prolific short-film résumé that includes 2009’s Denise Richards’ Fun Bags. That’s a title that pretty much gives you everything you need to know about his feature debut, but even still he’s a fresh director with a lot of talent in front of the lens as well, so there is potential here.

After suffering through years of watching his sons make fools of themselves at every single family get-together, the alpha-Stangle, Burt (Stephen Root — bless this man), insists Mike (Adam Devine) and Dave (Zac “I’m impossibly photogenic” Efron) find themselves two nice girls to join them as dates to their sister Jeanie (Sugar Lyn Beard)’s upcoming wedding in Hawaii. So they put out an ad that eventually gets the attention of hard-partying girls Tatiana (Aubrey Plaza) and Alice (Anna Kendrick).

The story spends time getting us acquainted with both parties before eventually forcing worlds to collide in a perfectly contrived manner when Tatiana walks out into traffic, creating a scene that eventually introduces them to the boys who just so happen to be in the vicinity. Her recklessness is inspired by wanting to do something nice for her best friend Alice, who is still trying to recover from the fact her would-be husband literally said “I do . . . . not” at the altar.

While Kendrick — annoying as she is in this movie — is the beneficiary of some background development, we never really get to understand why Tatiana is the way she is. Plaza just seems to enjoy playing unreasonably skanky women these days. Since seeing her on Parks & Rec, I thought I was onto the next Kristen Wiig, queen of the deadpan. I’m not sure anymore if she’s playing them ironically or if these are characters Plaza really believes in, but . . . I guess if you have to skank it up, skank it up girl! I’ll still be a fan. God knows why. Maybe because she’s a dead ringer for an ex of mine. Maybe.

Meanwhile, boys will just be boys. Devine and Efron establish a terrific repartee that allows them to rise above every single opportunity Szymanski seizes to subdue them with endless clichés. They may not shift the needle of the narrative into territory worthy of any kind of further cultural, social or psychological/emotional discussion, but they are by far the best thing about a movie that relies heavily on the strength (translated in this case as charm) of its lead performers.

It certainly doesn’t bank on the novelty of its screenplay. Mike and Dave at best offers a surprisingly wholesome message about the importance of family and how they accept you for who you are, no matter how many weddings you turn into Project X. Having people that care about you, about your past, present and future is what matters more than getting your strange on. In a movie of its ilk, that’s a rarity, and why it ultimately won me over. 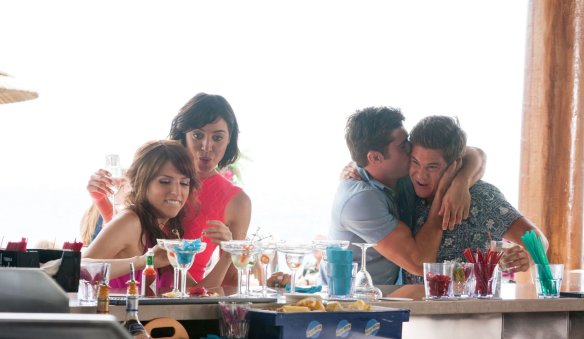 Recommendation: Mike and Dave Need Wedding Dates doesn’t so much subvert as it manages to balance raunchy comedy with a heartfelt message. Mike and Dave would make Vince Vaughn and Owen Wilson proud.

All content originally published and the reproduction elsewhere without the expressed, written consent of the blog owner is prohibited.