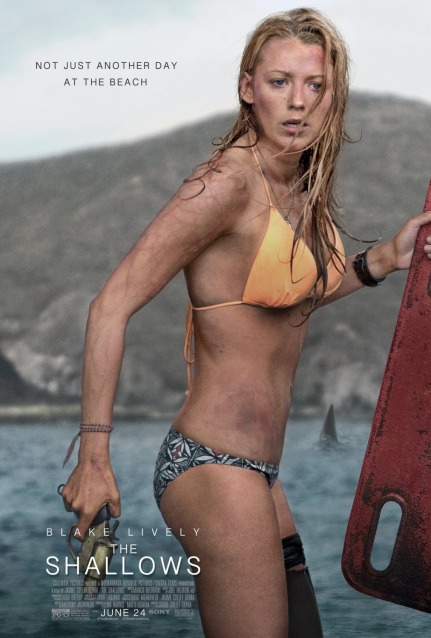 Blake Lively vs. Huge Shark: The Movie is a pretty sweet little thriller, a self-contained enterprise that seeks to unnerve rather than terrify by tapping into human’s innate fear of deepwater-dwelling beasts like great whites (not to mention horrifyingly large jellyfish).

Jaume Collet-Serra’s tropical-set horror/thriller is a refreshingly slight film set adrift in a sea of complex, bombastic . . . well, I’m not gonna name names or genres but we all know where I’m going with this. The premise is simple, the cast is engaged and the cinematography transports us to ‘Paradise’ with Lively’s big-wave-seeking, medical-school-abandoning Nancy Adams who has been having a rough time since the passing of her mother. Nancy has seemingly inherited her mom’s love for surfing as she finds herself now on the sands of a secluded, nameless cove — apparently the very place her mom claimed as her favorite surf spot.

This really is Lively’s movie — okay, and the shark’s, yes how could I forget — because her interactions with others, including the local with whom she hitches a ride to the beach, are limited to a flurry of brief exchanges, most of which are designed to prove that Nancy doesn’t speak very good Spanish and the locals don’t speak good English. That particular communication barrier doesn’t really matter because no one speaks Shark and that’ll come in handy more than anything later.

The Shallows is indeed an intimate experience, reminiscent of Danny Boyle’s 2011 survival drama 127 Hours at least when it comes to the harrowing quasi-first person perspective. Serra’s vision is certainly fun and exciting, but it hardly effects the emotional and psychological involvement Boyle did when James Franco decided to throw down the performance of a lifetime. In fact, in spirit this shares more in common with the personal trials we endure with Reese Witherspoon as she attempts to reconnect with herself and her family by embarking on a bold solo hike in Wild.

As Cheryl Strayed, Witherspoon’s performance was informed by a mixture of guilt and bitterness as she continued along her journey, strong emotions that only fueled her to keep going. Lively’s Nancy isn’t so much bitter as she is guilt-ridden and still at a loss for words when it comes to talking about the past. We see it in the brief glimpses we get of her sister and father via FaceTime on her phone prior to her hitting the waves. She can barely hold a conversation with her father because the conversation about why she decided to drop out of med school inevitably surfaces.

It’s probably not worth delving into character development at any great depth since that’s pretty much the extent of it. Suffice it to say there’s enough here to actually make us feel something when Nancy finds herself, ironically much like Aron Ralston, stuck between (or in this case on) a rock and a hard place when the shark’s aggressive circling pins her to a small outcrop of rock that appears at low tide. She’s only 200 yards from shore but the shark is much too fast for that to be viable option. There’s a small metallic buoy about 15 yards from the rock she could swim to when high tide reclaims the rock.

Can Nancy out-smart her toothy predator?

Boobs. We’d love to find out the answer if the cameras weren’t constantly fixated on ogling Lively’s lovely beach bod. I had a lot of fun with The Shallows — the increasingly versatile Lively is certainly committed to the material and the movie looks glorious — but some part of me can’t shake the feeling this was kind of a pervy shoot. And that is a thought that somewhat diminishes the enjoyment I got out of a film that was never meant to be taken seriously. 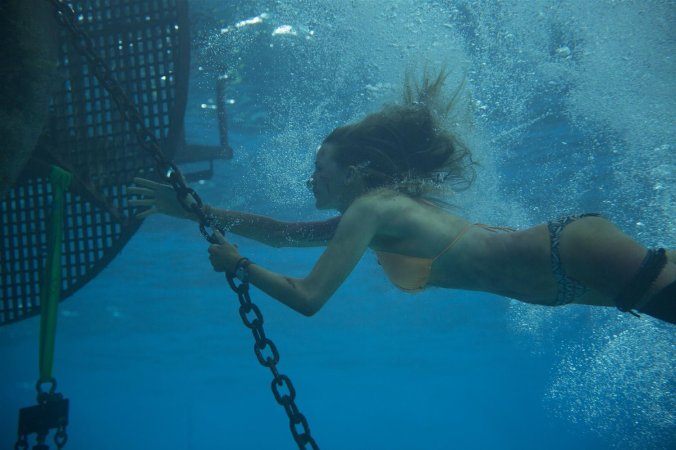 Recommendation: More Deep Blue Sea than it is Jaws, The Shallows manifests as a silly but ultimately fun bit of summer escapism, one shot confidently enough to ensure those who have a mortal fear of beaches will never go near one again.

17 thoughts on “The Shallows”