I’m going to admit something embarrassing right now. I, uh. . . . yeah, I still haven’t seen the movie Rob, as in the one and only MovieRob, is about to talk about today. Not going to make excuses — I need to change this ASAP, and possibly rearrange my priorities on my Netflix queues, perhaps even start going to church more often — but first I’m going to let my friend Rob tell you why it’s worthy of the Decades blogathon. Rob, the floor is yours! 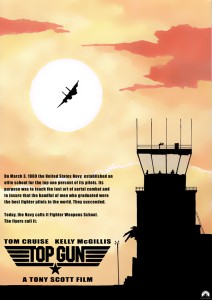 “That was some of the best flying I’ve seen to date – right up to the part where you got killed.” – Jester

My Take on it – This movie came out 30 years ago and it still makes men, women, boys and girls want to be fighter pilots because of the way it depicts the glamour of it all.

The way that this film was shot makes us feel like we are in the plane itself and feel the jerking actions of the seat as we try and evade the enemy fighters.

The viewer actually feels like he/she is in the cockpit of an F-14 Tomcat and we never want to get out because it’s so much fun being there.

The one weak part of this film is the love story between Cruise and McGillis.  It’s pretty cold and doesn’t really genuine as it really should. (I heard that the stars hated each other, so that could contribute to the coldness.)

Cruise and Kilmer also apparently didn’t get along so that probably helped with their on screen rivalry.

The fact that the movie gets our adrenaline pumping so fast due to the aerial and combat footage helps make up for the lack of physical chemistry between the two leads.

This movie has an unbelievable soundtrack and the songs really help create each of the diverse atmospheres depicted in the film so perfectly.

Here are some of the songs:

Bottom Line – Great film that makes everyone want to be a fighter pilot. Amazing aerial footage puts us right in the cockpit of those Tomcats and we never want to leave. The love story aspect is a bit weak, but the adrenaline that gets pumping in our veins by the combat footage more than makes up for it. Excellent cast. Amazing music that helps build the different atmospheres created throughout the movie. Highly Recommended!

MovieRob’s Favorite Trivia – The real Top Gun School gives a $5 fine to anyone in the staff that quotes the movie. (From IMDB)