Greetings, and welcome back around to another edition of the Decades Blogathon! It is my pleasure getting to co-host this great event with Three Rows Back — a site if you are finding out about for the first time right now (or if it’s been awhile . . .) you must absolutely drop by. Mark is the reason this blogathon exists!

Anywho, today I’d like to welcome Filmscorehunter, who’s the pen behind The Cinematic Frontier, a very user-friendly and diverse site featuring everything from reviews of films both new and old, to Blu-Ray recommendations to blogathon posts (just like this one!). Go on and pop around there if you like what you read here. Now let me step aside and let him take over . . . 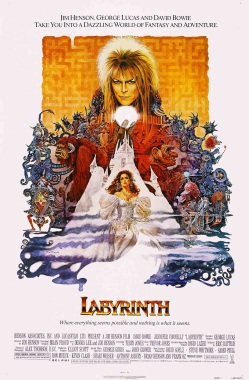 Jim Henson brought joy and education to children and adults through TV programs such as Sesame Street, The Muppet Show, and Fraggle Rock.  He eventually became involved in feature filmmaking as well (such as the first three Muppet movies; he made his directorial debut with 1981’s The Great Muppet Caper).  After co-directing 1982’s The Dark Crystal with Frank Oz, Henson next focused on another fantasy film that would require technical challenges that pushed the limits of special effects technology at the time (and would also be a musical).  I was fortunate enough to catch a midnight screening of Labyrinth three years ago on the big screen at the Landmark Midtown Art Cinema during a visit to Atlanta, Georgia.  It was fun seeing it again after having seen it many years before on cable.  I was finally able to catch a midnight screening of the film a few months ago at the Landmark Sunshine Cinema in New York City, and it was a joy to see it once more on the big screen.  This review of Labyrinth is my entry in the Decades Blogathon hosted by Three Rows Back & Digital Shortbread. 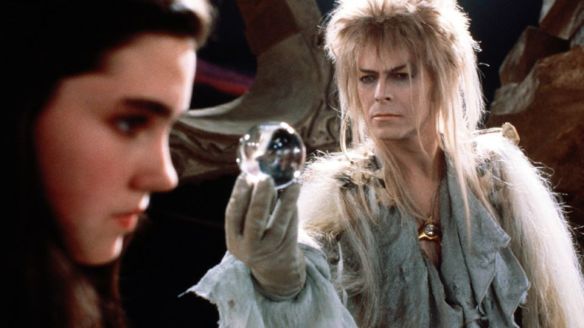 The screenplay by Terry Jones explores a coming-of-age story influenced by The Wizard of Oz, Alice In Wonderland, Outside Over There, and Where the Wild Things Are.  Alex Thomson’s cinematography is beautiful, and Elliot Scott’s production design creates a diverse number of locations, including swamps, villages, and castle interiors (I especially loved the M.C. Escher-esque stairs and the Bog of Eternal Stench).  The costume designs by Brian Froud and Ellis Flyte are stunning (especially the ones featured in the ballroom sequence), and John Grover’s editing moves the film at a good pace.  The spectacular special effects are a seamless blend of practical effects, puppetry, and blue screen compositing.  Trevor Jones delivers an eclectic score that complements the songs contributed by Bowie (As the World Falls Down is my favorite song of the bunch).  Henson’s Labyrinth is a remarkable achievement that showcases an entertaining coming-of-age story as well as his boundless imagination.  Although not a box office success, it has developed a cult following over the last 30 years and is now a classic fantasy film.