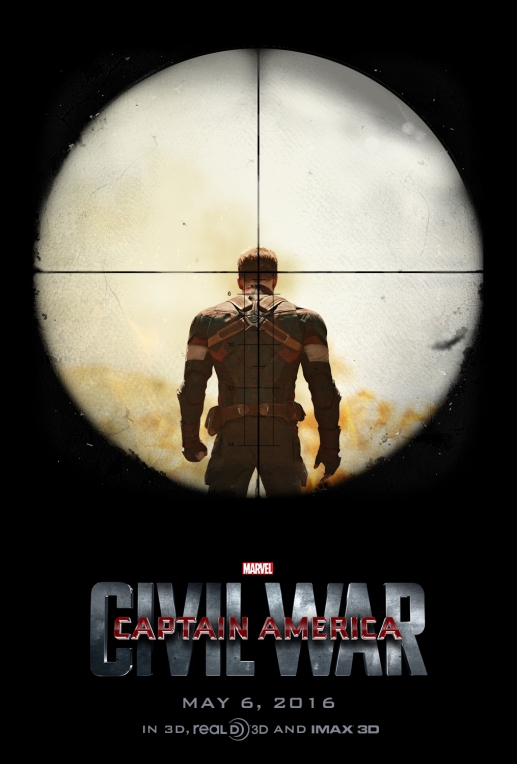 Standing in a line of about 200 rabid fans an hour before the screening I was asked by a woman in line — a hot mom actually — if this was the line for the Avengers movie. I really wanted to tell her, “No, this is for Captain America,” but who am I kidding, this is totally an Avengers movie. And so I was like, “Yeah,” and she was like, “Cool,” and then we both just went back to our lives.

That Captain America: Civil War is closer in spirit to one of those ultra-blockbusters is actually good news for me as I’ve never really stood behind Captain America. The Boy Scout/super-soldier kind of ruffles my feathers for some reason, and that’s through no fault of Chris Evans either. Nevertheless there I was, middle of a mob on a Saturday afternoon, the manufactured product of a month-long brainwashing program designed to win my allegiance toward either Team Steve or Team Tony.

Civil War is a film whose emotional upshot takes an eternity to eventuate, but when it does it’s actually well worth the two-and-a-half-hour sit. Steve and his embattled friend Bucky, a.k.a. The Winter Soldier (Sebastian Stan) are at the heart of a complex moral, emotional and psychological battle that divides the Avengers — all but Hulk and Thor, of course, who are off galavanting elsewhere — straight down the middle when they are asked to sign the Sokovia Accords, a peacekeeping effort drawn up by the United Nations in response to the concerns of a growing population that thinks the Avengers are doing more harm than good.

After yet another disaster, this time in Wakanda at the hands of Scarlet Witch (Elizabeth Olsen, who has completely given up on trying to sound Russian at this point), in steps Secretary of State Thaddeus Ross (William Hurt) to give everyone a choice: either agree to the sanctions, to be potentially overruled in any given situation if it is deemed necessary . . . or retire from the superhero biz.

And then everyone seems to get really mad. Needless to say, the stakes are high this time, higher than they were when Loki was trying to divide and conquer from within all those movies ago, if you can believe it . . . (wasn’t it pretty much doomsday then, too?) One side argues for their continued autonomy while the other, surprisingly spearheaded by a guilt-ridden Tony, believes having a watchdog might help prevent future awkward encounters with any living relatives of people he has inadvertently killed.

Thanks to Christopher Markus and Stephen McFeely, two writers keen to redress familiar characters under this new guise of bitterness, distrust and uncertainty, there are equally compelling reasons to join either camp. In fact as Civil War progresses it gets ever more entrenched in the complexities of this ideological conflict. The appearance of a cold German militant named Baron Helmut Zemo (Daniel Brühl), the one behind an earlier attack on the UN that claims the life of Wakanda King T’Chaka, father of T’Challa/Black Panther (Chadwick Boseman), inspires Steve to ignore new-age protocol as he attempts to stop Zemo from unleashing a secret arsenal of other Winter Soldiers being kept in cryogenic stasis at a Hydra facility in Siberia.

Civil War, like Tony and Steve, has a lot on its plate, but it wisely (and creatively) spreads the workload across its many players. Even if Downey Jr. takes this opportunity to effect a more somber version of his character than we’re used to seeing, that famous acerbic wit is never lost with the integration of Scott Lang/Ant Man (Paul Rudd) and Tom Holland’s amazingly acne-free Peter Parker/Spider Man. Black Panther digs his claws in with menacing presence and a lot of righteous anger. Jeremy Renner as Hawkeye returns as do Anthony Mackie’s Falcon and Paul Bettany as the visionary . . . Vision.

Even though giving each their time to shine means taking some away from Evans, extended interactions between less famous figures are more than welcome and give these individuals purpose within the context of the cinematic retelling of their own journeys. Bettany is perhaps the highlight, his loyalty to protecting the lone Maximoff twin from destruction following her actions in Wakanda offering a miniaturized version of the conundrum facing Iron Man and Captain America. And then there’s Black Panther’s determination to take out the one responsible for his father’s death.

For all of the potential devastation that is implied Civil War isn’t a dour affair. It doesn’t dwell in misery, and it really could have. There’s a melancholy vibe here, but the Russo brothers seem comfortable conforming to Marvel’s standard of finding levity amidst dire circumstances, injecting humor into scenes that would otherwise trend DC-dark. (God forbid that ever happen.) A movie with ‘war’ in its title going the comedy route is a risky proposition, and though this isn’t devoid moments of weakness, the continued expansion of a world parallel to ours allows them to pass quickly. There’s so much going on that Civil War all but demands repeat viewings. Eight years into the game, that’s a very good thing for the MCU.

I wonder what the hot mom thought about all of it.

Recommendation: With the slightly-famous actors as comfortable as ever in their respective roles, Civil War benefits from the intersection of emotionally resonant performance and thoughtful, crafty storytelling. People like me — non-Captain fans — benefit greatly from the distraction of the other people around him fighting for what they believe is right for the future of the Avengers. A solid realization of a very complicated time, and the balance struck herein makes it one of my favorites of the entire MCU canon thus far.

Quoted: “Okay, anybody on our side hiding any shocking, or fantastic abilities they’d like to disclose, I’m open to suggestion.”

A Movie Blog for the Latest Movie Reviews, Trailers, and More