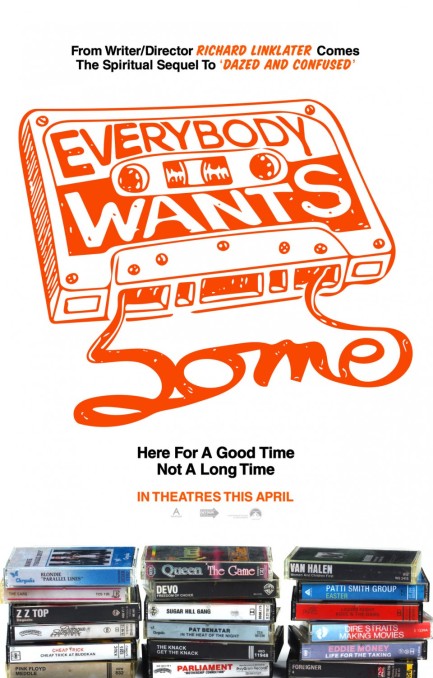 All right, all right, all right — so it’s been over twenty years since Matthew McConaughey brilliantly repurposed those famous Doors lyrics, and it might seem a little suspect that director Richard Linklater would take another trip like this down memory lane, in 2016. Has he run out of ideas? How will he find a way to crowbar some long-lost cousin of David Wooderson in to the story? How close was he to leaving the project titled Dazed and Confused 2? Naturally, a project like this raises more than a few questions.

Those concerns all but disappear without notice like a Saturday morning hangover when, after only a few opening scenes, we find ourselves jettisoned back to the days of disco, coke (well, here it’s replaced by a wealth of weed) and, of course, the Walkman. Part of the deal here is remaining open-minded about developing another love affair with a different decade but the same director, and if you’re able to do that you’ll find there was indeed room for one more of these in his catalog. Everybody Wants Some!! may have to wait some time before it gains cult status, but then, so did all those hazy high school hijinks.

Rather than focusing on the culmination of another semester wherein the best and the worst of seniors and their underclassmen alike are brought out, Linklater inverts the time table and builds toward the first day. The story follows a collegiate baseball team through the final weekend of summer, centering on a new pitcher named Jake (Blake Jenner), one of the most talented players at his high school, who finds himself navigating this unfamiliar, deeper pool of talent and competitiveness. Meanwhile he and his teammates negotiate, and largely embrace, the various social stigmas attached to being a college athlete.

Once again Linklater gathers together a cast of relative unknowns to help keep the distraction of celebrity status to a minimum. There’s the mustachioed and most-likely-to-go-pro McReynolds (Taylor Hoechlin); Roper the ladykiller (Ryan Guzman); stoner Willoughby (Wyatt Russell); faux-philosopher Finnegan (Glen Powell); Plummer (Temple Baker) . . . who’s just kinda there; Jay (Justin Street), who’s a total psycho and the team’s current pitcher; the gregarious Dale (J. Quinton Johnson), who also kindly takes on the task of orienting freshmen to the team; Beuter (Will Brittain), a good-old boy with the southern-fried accent; and Nesbit (Austin Amelio), an upper-classman burnout with a passion for the game. There are others as well but this is the core.

They’re wholly believable as an actual college baseball team, and if not that then their perpetual involvement in shenanigans establishes them as the next best frat house behind Delta Tau Chi. It helps that the performances are uniformly fantastic — energetic and naturalistic. There’s genuine camaraderie between them, especially once the movie shifts into its second third, where the boys start figuring out what everyone is all about. On the female side, there are far fewer stand-outs — Everybody Wants Some!! is likely to struggle to pass the Bechdel Test — but Zoey Deutch as Beverly, a theater major Jake finds cute, anchors the film in slightly more romantic territory with her warmth and optimistic outlook on life.

The love child of Animal House and Dazed and Confused, Linklater’s baseball-themed bacchanalia feels like a long lost relic, a film made years ago that’s only now being rescued from the clutches of development hell and resuscitated for audiences too young to appreciate how far out Linklater’s paean to the ’70s really was. It’s a fleeting watch, and it’s not for the narrative-minded. The story boils down to a team learning to gel before the grind of spring training locks them back into regiments and routines. From start to finish this is a raucous party atmosphere and it might be harder to identify with a group of extroverted athletes than say, a cross-section of high school broken down into its many cliques.

Nevertheless, Linklater has once again managed to tease out intensely strong feelings of nostalgia and bittersweetness by stuffing so much into these precious last days of summer. The film, despite itself, is a study of maturity and accepting responsibility. Kids turning into adults is as inevitable as waking up one morning in these houses to find crude drawings all over your face.  Everybody Wants Some!! is about finding your place in a larger group, about figuring out what you can contribute. Find out what matters most to you. That’s true of college but it’s most poignant when you consider the vaster pool of possibilities outside of school.

Recommendation: A gentle nudge in the direction of some of our glory days, Everybody Wants Some!! functions as a highly amusing diversion (even if it’s not outright hilarious). A game cast combines with a mise en scène that brilliantly pays tribute to the fashion and social etiquette of a decade long since passed. Perhaps it’s best not to make comparisons, but this one’s kinda hard not to recommend to those who fell in love with the director’s previous efforts. Baseball fans might be disappointed to learn how little ball is actually played, however.

Quoted: “I’m too philosophical for this shit!”

19 thoughts on “Everybody Wants Some!!”