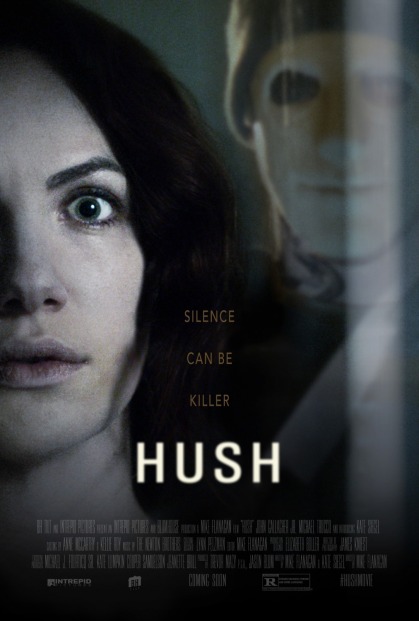 What you don’t hear definitely can hurt you in Hush, Mike Flanagan’s second consecutive exploration of the human sensory system and how much we depend on it, especially in stressful situations.

In 2013 Flanagan emphasized, even obsessed over visual stimuli, how one’s mind has the ability to play tricks on the eye when it comes to seeing things that may or may not be there. The title Oculus should ring a bell, even if its vaguely silly plot about a rogue antique mirror that kills people, does not. Flanagan now seems poised to be taken a little more seriously, cutting a nifty slice of indie horror based around auditory senses, or the lack thereof.

Hush pits a young mute woman named Maddie (Kate Siegel) against a psychotic stalker (John Gallagher, Jr.) that appears at her back door late one evening. We find ourselves in an unnamed and unidentified location, some thickly wooded area better off not named. Here Maddie’s been living a quiet life in isolation, one that she claims she didn’t choose but rather was forced upon her since complications from a surgery many years ago rendered her permanently deaf. She seems to be getting along well despite being completely on her own, and despite her struggles to complete a second horror novel. (She’s already published one.)

Flanagan wastes preciously little time propping up the pieces that will hold the conflict in place. In hindsight, introductions could have been a little less mechanical — we see Maddie chat with a neighbor briefly about that book — although there’s really no reason to dilly-dally since the premise is so pure and uncomplicated. But during this fleeting calm we get to know and care about our protagonist. Siegel’s committed performance, including some emphatic signing, reveals much about her personality, Maddie’s intelligence and passion for writing evident above all but we can tell she’s still trying to recover from something emotionally. She seems vulnerable and distant. That vulnerability takes on an entirely new meaning when we first see her tormentor, a chilling shot that demonstrates why her lack of hearing is a potentially fatal disadvantage.

Let’s talk about the home invader, shall we, because he’s something of a nightmare. Armed with a compound bow and a facemask, Gallagher (credited simply as ‘The Man’) feels like he just sauntered over to the next house after the events of You’re Next (I guess he’d need an animal mask if he was really wanting to fit in). The change of pace seems to be a good thing for the up-and-comer, even if his iciness is a trait that takes some time getting used to (maybe it’s the lack of a beard and a shaven head that does it). Even if his character’s backstory is nonexistent — where is he coming from? why is he doing this? just who is this guy? — his psychosis isn’t to be questioned. Here is a man whose depravity knows no bounds.

Plus, that aura of mystery that first seemed like lazy writing comes back to haunt us later. We want to go digging for answers, any lame justification as to why this man might want to make Maddie suffer, but that’s a fruitless effort. Some people are just no good. That there doesn’t appear to be any kind of personal vendetta means there’s little reasoning with the guy and without reason there can be no comfort. To Maddie’s credit, she does try.

To Siegel’s credit, who also co-wrote the script with Flanagan, her resilient performance is destined to hush the skeptics, those who write off contemporary horror as lazy cash grabs utterly disinterested in offering up intriguing characters (to be fair and as a skeptic myself, they have a valid point with a great many releases). Hush works primarily because of its characters; it’s certainly less ambitious in other aspects. Too often there comes a pause where you think ‘what the hell is the guy doing right now? Why doesn’t he come in and end this now?’ Indeed, the mind is going to wander where it shouldn’t, and that’s an unfortunate result of the story focusing so intensely on how Maddie reacts to a situation that goes from bad to worse. If we’re assuming events are unfolding in real-time, there’s a lot of downtime and that fact becomes quite the distraction.

But this game of cat-and-mouse is too compelling, too tightly-wound to worry about nitpicks like that. You could poke enough holes in the script to make it look like swiss cheese before writing it off as something you’d rather not watch. Hush is so impressive in the way it integrates an atypical character into a more familiar narrative. Not once do you feel bad for Maddie simply because she can’t hear — you fear for her life when that fact actually becomes a threat to her safety, but never do you pity her. She’s a strong and independent woman willing to do what it takes to overcome her terrible situation, willing to do anything other than lay down and die.

What kind of an ending is Maddie going to be able to write for herself? The answer can be found if you’re willing to sit through some seriously uncomfortable silence.

Recommendation: Hush offers the jaded/casual fan of modern horror another reason to give the genre another go; it’s a character-driven piece with some crucial sound design and editing that rewards more often than not and while there could have been some more substantial development early on, the great performances and unique circumstances are enough to overcome a few shortcomings. If you liked Oculus, you should definitely Flanagan’s latest a shot. Exclusively on Netflix.