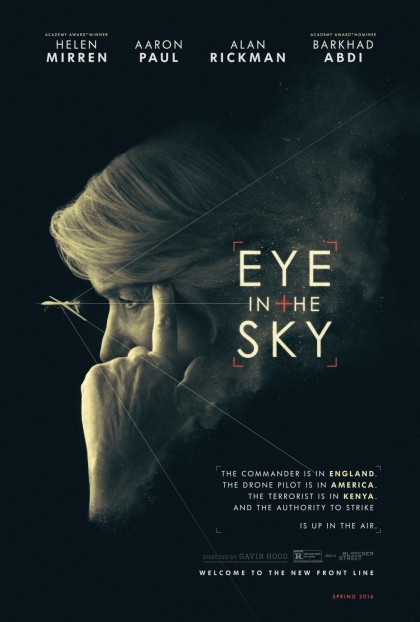 Eye in the Sky presents an intriguing, if not familiar moral conundrum as a British Army Colonel weighs the pros and cons of pulling the trigger on a drone missile strike that could eliminate top terrorist targets sheltered in the Kenyan capital of Nairobi. In the end the results aren’t entirely surprising, so why such a rewarding experience when all is said and done?

Even though it’s Helen Mirren’s intense stare that threatens to burn a hole in the official release poster, Peter Travers is so right: this is one hell of a way for the late Alan Rickman to bow out. Not that Mirren isn’t worth mentioning (she definitely is), but Rickman’s last on-screen performance is so stoic it’s uncanny. It’s almost as if he was trying to make this one count. His Lt. General Frank Benson isn’t the focal point of Gavin Hood’s seventh feature film but the images I’ve taken home with me are those of his face, twisted into a look of total disgust as he awaits critical decisions to be made at higher levels — the whole bureaucratic chess game he finds himself caught in while precious time ticks away taking an obvious toll.

It’s like he’s waging his own private battle with his female co-star to see who can emote more intensely, evoking all of the anguish perhaps a real-life general or colonel might not necessarily publicize in the interest of keeping their underlings as calm, cool and collected as possible. Still, Eye in the Sky‘s script is incredibly stressful and part of the reason the film is so brilliant is we understand precisely why our leaders become so exasperated at times.

The mission in question is to take out three terrorist suspects who rank #3, #4 and #5 on the British government’s list of most valuable assets, and Colonel Katherine Powell (Mirren) hasn’t been this close to capturing them in six years. They have a vantage point from 20,000 feet, a drone plane piloted by relative veteran Steve Watts (Aaron Paul) and newbie Carrie Gershon (Phoebe Fox), both stationed at Creech Air Force Base in Nevada. They also have ground control in the form of Barkhad Abdi‘s Jama Farah, who is put into a particularly precarious position remote-controlling a camera built to resemble an insect. He is to infiltrate the house and verify the identities of those inside. The footage he is able to get is chilling: the suspects appear to be donning vests rigged with explosive devices and it also appears that they will attempt to detonate the bombs in a public setting.

Making matters worse is a child who appears on the scene hoping to sell bread for her family. It’s the same child we happen to be introduced to from the outset, a sweet girl named Alia (Aisha Takow) who is being privately educated by her parents and learning to hula-hoop in her backyard, out of sight of the patrolling ISIS guardsmen who have been imposing Sharia Law upon the land. In Colonel Powell’s eyes the mission status, which has changed from ‘capture’ to ‘kill’ since the new intel provided by the bug camera, cannot be aborted simply because of one potential collateral damage concern. While a high-ranking American government official agrees via Skype, others don’t see it the same way.

What makes Eye in the Sky such gripping viewing manifests as a truly collaborative effort between writer and director. Guy Hibbert’s script is provocative, emotional and convincing, but it would mean little without Hood’s ability to attract a diverse cast of international talent and to play to each of his actor’s strengths. There’s no one perspective that dominates; an impressive mix of strong roles and comparable screen time given to each lends the film a relatively comprehensive bird’s eye view rather than attempting to encourage controversy. How are governments able to justify civilian casualties as a byproduct of eliminating terrorist suspects, or, more broadly (and hence less novel an idea): is losing one life worth the price of many? When actions are taken the judgment is left up to us; this was never going to be a win-win situation, but ultimately was the right call made?

Dame Hellen Mirren is front-and-center when it comes to asking that question: is it worth it? As the commanding, intense Colonel Powell Mirren might never have been better. She exudes strength as a woman put into a hell of a position on this day. But support comes from unexpected places, such as Paul’s emotionally conflicted pilot who at one point feels it is in his best interest to challenge his superior when it comes to reevaluating the situation once the girl sets up on this street corner. Consider Steve Watts his finest hour as a performer as he frequently shoulders the emotional burden of having a finger on the trigger. It’s his vulnerability that’s just as frequently in the cross hairs.

Then, of course, is Rickman, seated in the situation room somewhere in London, far removed from the dangers themselves but visibly perturbed by the action — or lack thereof — taken in assuring the British armed forces are legally OK to pull that trigger. On his plate are the repercussions of British-American relations, given that one of the targets is an American who radicalized years ago. That’s to go along with the aforementioned unwanted publicity following a potential killing of an innocent youth. Things become messy alarmingly quickly; the grimace he bears suggesting much about the limits of his own considerable power.

Eye in the Sky works as a taut political thriller as well as a compelling ethics debate. Again, and generally speaking, this isn’t a debate we’re having for the first time but it suits the times we live in, particularly as technology plays a larger role in the armed forces and how nations perceive the character of others as they decide to fire (or not fire, in some cases) on their targets. I may never have been taken by surprise by how things played out, but that doesn’t mean the film failed to earn my empathy. This is a smart, engaging and intense drama whose incisive commentary on the matter is provided by a cast and crew that remind us why they’re getting paid to do what they do. 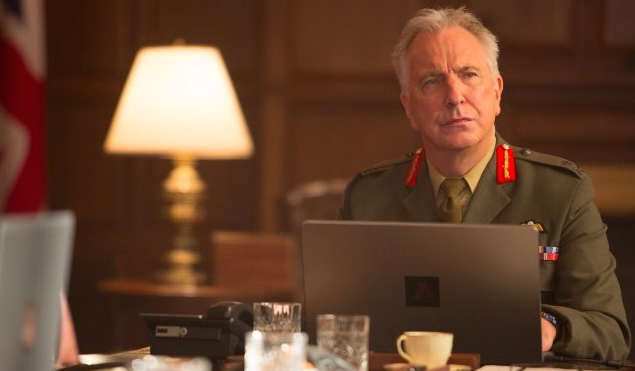 Recommendation: A strong cast and a strong(er) script make Eye in the Sky a worthwhile drama seeing unfold on the big screen. I recommend most strongly to fans of Dame Helen Mirren, or those wanting to see Alan Rickman in his final performance — either or works.

Quoted: “Never tell a soldier that he does not know the cost of war.”