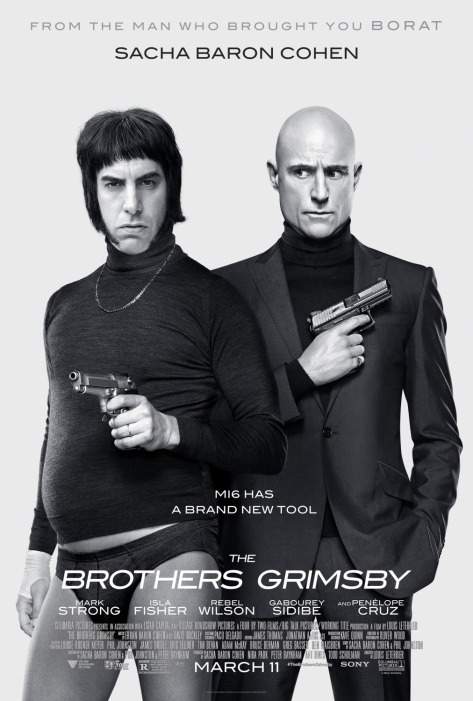 There’s something about Sacha Baron Cohen that really makes you feel like a complete idiot. He’s become really good at that because here I went, blinded by my own boredom, to a screening where I was the only viewer and thinking, ‘Okay, this might be fun. At least I can laugh obnoxiously loud and not think twice when something actually funny happens.’

The joke was on me because I’ve literally laughed more at the wakes I’ve attended.

The Brothers Grimsby is, to put it nicely, Cohen’s own Mortdecai; it’s the stinkiest, lamest, dumbest release so far this year and like Johnny Depp’s misguided attempt at mocking the English, it marks another point of no return. While it was naïve to think that Brüno would be the nadir of the career of one of England’s great embarrassments, that movie was pretty terrible — Brüno not Mortdecai, although yes, very much Mortdecai as well — and it set quite a low bar regarding the efforts a movie should make in entertaining or offering escapement.

But what Louis Leterrier et al don’t seem to understand is that that’s not the kind of bar you play limbo with; the goal is not to see how low you can go. Lo and behold, they deliver a revolting mess of a comedy that uses bodily fluids as both literal and figurative lubricant to make up for the script’s refusal to do any of the work. There’s one scene in particular that’s offensive and sums up almost everything that is wrong with not only this film but the entire subculture of sadistically gross-out comedy. Those poor fucking elephants (and that’s the verb, not the adjective). This exercise in visual torture is what would happen if you gave Mel Gibson free reign over the fake rhino birthing scene from Ace Ventura. The excessiveness will test the sensitivity of your gag reflex, and that’s an issue that runs all throughout.

So who are ‘the brothers Grimsby?’ And why is the American release so awkwardly titled? Well, who gives a shit about the why; let’s talk about the what. The brothers are a pair of mismatched boys who were born and raised in the poor fishing town of Grimsby, which resembles the bottom of a dumpster or a very large ash tray. Cohen plays Nobby Butcher, the yoonga bruvva of Sebastian “superspy” Butcher (Mark Strong, painfully out of place). The pair have been separated since they were six years old and Nobby longs for the day they meet again.

Similar to previous outings Cohen opts for caricature over character, hoping to inflict the maximum amount of damage upon the culture that supposedly spawned his creation. Once a Middle Eastern pervert, then a one-time gay Austrian fashion journalist, he now finds himself donning the mutton chops and packing on the beer gut as a soccer hooligan with a proclivity for thick women and thick-battered fish-and-chips. He’s like a pig writhing around in the grease and sweat of intoxicated Man United fans all crammed into the pub watching The Big Match.

The world we visit in The Brothers Grimsby isn’t a pretty one, it’s populated by the so-called ‘scum’ of English society — the derelicts and the blue collar chumps, the illiterate and the really ugly and sweaty. Fans who may have been delusional enough in the past to liken the Cohen moviegoing experience to crude culture shock can’t really say the same thing now; the only thing shocking about this film is how uncultured it truly is. Nobby has far more screen time than his older bro, and that’s disappointing because ultimately Sebastian provides our only respite from the cartoonish extremism Leterrier has fashioned here. But the real question there has to be, how clear is Strong’s calendar right now? He had time for this?

Scenes featuring the MI6 agent in action — think of James Bond only with more baggage and less hair — feel like they are ripped straight from the upcoming Hardcore Henry, what with the liberal usage of point-of-view shots designed to raise both our heart rates and awareness of Go Pro cameras. While the action sequences are a welcomed distraction, they’re still not an excuse for the sheer pointlessness of everything else. A subplot involving Sebastian’s line of work is as generic as you can get: he must stop a shady organization from releasing a virus into the atmosphere at a high-profile soccer match. They’re doing this because of the global population crisis.

This paragraph that you’re reading now is definitely an edited version of what lay before, but in consideration of my readers I’ll just say that the film’s attempt to balance action and heartfelt drama with Cohen’s insufferable presence is funnier than any of the comedic elements presented here. The Brothers Grimsby ultimately fails when it tries to convince us of their shared history. I saw the look on Strong’s face during the “suck my balls” scene. He didn’t want anything to do with this. What, was Rob Schneider busy? 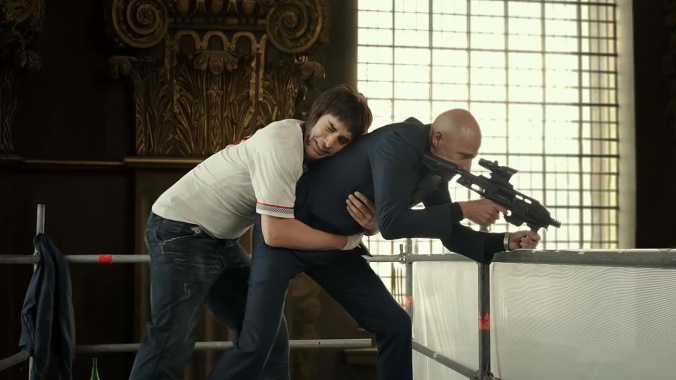 Recommendation: Sacha Baron Cohen may still have appeal for some but after The Brothers Grimsby, a film that fails to mine comedy out of what little interesting material it presents while continuing to mistake causing its audience to actually gag for comedic gags, this reviewer has officially stepped off the bandwagon. A film that caters to the lowest common denominator and looking  really bored with itself in the process, this is an unmitigated disaster from start to finish.

Quoted: “Oh, these heated seats make you feel like you’ve pissed yourself!”

25 thoughts on “The Brothers Grimsby”