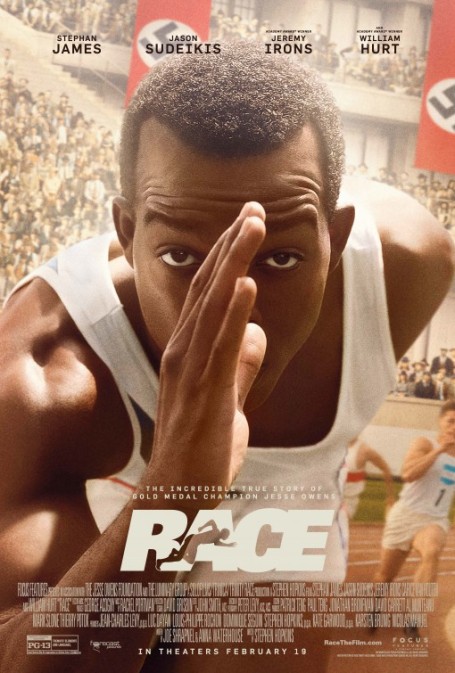 No sports film is strictly a celebration of athleticism. Tethered to that name or group of names is the burden of understanding, not of themselves — the athlete knows specifically what he or she is — but rather that their actions represent a broader community even beyond family. Some names simply become associated with significant social, cultural or political shifts because of who, what and when they are. Timing certainly factors into the story of Jesse Owens.

It took 40 years before the White House officially recognized Owens’ accomplishments, before President Gerald Ford in 1976 bestowed upon him the Presidential Medal of Freedom, and another 14 years (and several more presidents) before he earned the Congressional Gold Medal. Just as his accomplishments took far too long to become engrained into American culture, the wait for the definitive movie about the man is going to last a little longer.

The bluntly-titled Race is a film that dutifully serves as a highlight reel of an extraordinary figure, but its movements are a far cry from the elegance and power of this sprinter/long-jumper. As a dramatic reenactment of two key moments on the track — Owens’ record-setting performance at the Big Ten meet during which he broke three world records and tied a fourth and his four-time gold medal appearance at the 1936 Berlin Olympics — the film is a decent watch. Even though these insights come so infrequently as to threaten the film’s status as a sports film, at least the action looks good.

Race is thoroughly burdened by the weight of its champion on its back. Unfortunately it couldn’t even make that aspect entirely captivating either. Stephan James is nice enough as the mild-mannered and gifted young track star but this is a forgettable performance. Quiet power is actually a thing, but that’s not what we get with the 22-year-old Canadian actor, whose stoicism often teeters on the edge of being boring. Who knows though; if meeting the icon in real life were still possible perhaps the moment would be surprisingly innocuous. But boring?

The film opens as a baby-faced Owens is preparing to leave behind the grayish-blue of his Cleveland community, the first in his family to board the bus to college. The scene is as expected: mother hurries through a few last-minute words of wisdom while father, who has been out of work for some time, sits silent. The burden’s on us to interpret what he’s feeling. The departure happens with little fanfare. So far, so good. Race is clearly born out of a deep respect for the athlete’s humble beginnings. It’s unfortunately once he steps foot on Ohio State campus where the film starts stumbling over its feet uncontrollably.

Owens finds himself immediately embroiled in the racial tensions of the day, a major state university seemingly serving as the epicenter for hatred. (“But just you wait,” the film seems to caution us. “Wait until you get to Germany . . .”) Not even the locker room is safe. It’s not long before he’s summoned by Coach Larry Snyder (Jason Sudeikis), and the ensuing Obligatory Scene In A Coach’s Office deals with business as matter-of-factly as possible: “Your life is now mine. I don’t care about the girl you have back home, you have to prove to me how serious you are about winning. Blah, blah, blah.”

Sudeikis’ first lines are a literal check list of sports coaching clichés. Like a timid Owens we kind of just sit there, accepting them as they’re forced upon us. Sudeikis, typically a source of hilarity, takes on a seriousness that’s hard to take seriously. Lines that are meant to resonate prophetically, such as his dreaming of becoming an Olympic-bound coach once more, fall surprisingly flat. As it turns out, his hard-ass demeanor is just a front for a much more amenable, softer personality, one that’s even easier to access than the end of the 100 meter dash.

Less difficult to believe is Jeremy Irons as Avery Brundage, President of the United States Olympic Committee. Irons exudes the kind of intensity suited to a role of this magnitude, as a man who finds himself in an uncomfortable position negotiating with Hitler’s close associate and Olympic overseer Joseph Goebbels (Barnaby Metschurat), telling him America is prepared to withdraw their competitors given the ongoing persecution of the Jews and the German government’s exclusive list of who they want competing in the Games. Brundage may have to sell his soul if he is to get what he wants out of these talks.

Irons may stand out as the only Olympic Committee member worth talking about — heck, one of the only characters in the film worth talking about — but not even he is immune to awkwardness in a story that’s written with such a sense of conformity. Race is a passionless affair, so obliging to the typical structure it’s hard to reconcile the unique brilliance of Owens the racer with Owens the cinematically bland inspiration.

At least the moral conundrum is presented clearly. In that way, it’s even more frustrating that it’s the less tangible stuff that the film actually juggles better than anything. There are a few scenes where hostility is truly palpable and the way the political climate is taken into consideration is well-handled. The Americans believed withdrawing would show solidarity with the oppressed while participating would carry with it the burden of winning, for the alternative would mean allowing the Nazis to keep thinking their Aryan competitors — their RACE — are superior. In big open rooms surrounded by his stuffy-looking peers Irons commands attention. And he must, because this is by design.

As is everything else here, including our desire to connect with Owens on a personal level. Nothing is executed with emotion, it’s all mechanical. Hagiographic may be one word to describe Stephen Hopkins’ big screen treatment of an American icon, a once-in-a-lifetime athlete, but definitive it definitely is not. It’s more of a burden to have to watch it.

Recommendation: Utterly mechanical, obligatory, routine, predictable and any other adjective you might necessarily associate with a sports film, Race falls well short of the potential it had to tell the definitive story about Jesse Owens not just as a competitor but as a member of Ohio State’s elite team and as a citizen of the United States. Only those with almost no knowledge of Owens at all might stand to benefit from this thoroughly uninspired telling.