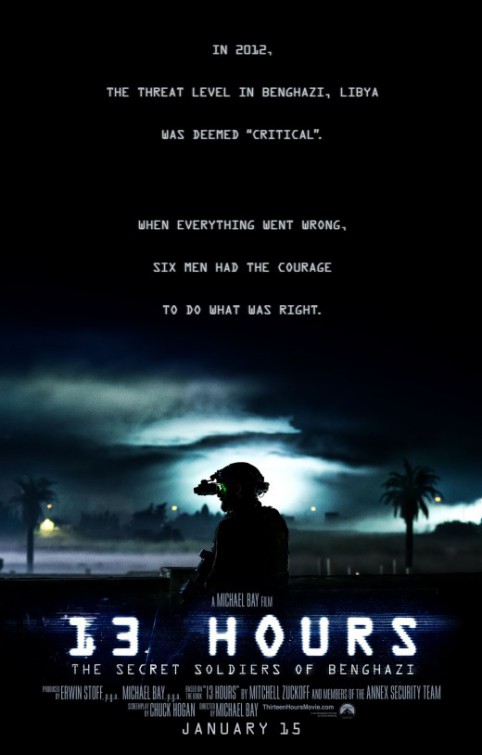 Michael Bay visits the Middle East in only his second non-Transformers extravaganza in nearly a decade. Following in the footsteps of Clint Eastwood (American Sniper) and Peter Berg (Lone Survivor), Bay seems to have had an epiphany of his very own: I too can profit enormously from releasing a war film capable of melting America’s heart in the throes of winter. I’ll call it . . . 13 Hours: The Secret Soldiers of Benghazi.

Mitchell Zuckoff’s novel, ’13 Hours,’ is awarded the big screen treatment in this relentlessly intense and at times graphic account of six security contractors and their courageous efforts to protect an American diplomatic compound and Ambassador Chris Stevens from waves of heavily-armed Islamic terrorists. It’s important the distinction of a compound be made because much of the farce stems from the fact that had it been an Embassy, greater security measures would almost certainly have been taken.

That the attacks, which took the lives of the Ambassador (Matt Letscher), Foreign Service Information Management Officer Sean Smith (Christopher Dingli), Tyrone “Rone” Woods (James Badge Dale) and Glen “Bub” Doherty (Toby Stephens), occurred on the 11-year anniversary of the September 11 terrorist attacks serves to heighten the drama. Making matters worse was the lack of support, both aerial and on the ground, provided for the small crew of literal guns-for-hire. (Then-Secretary of State Hillary Clinton has since acknowledged the government did in fact mishandle this operation, but if you’re expecting any kind of condemnation on that front you’re in the wrong movie.)

Curiously absent from proceedings is any sort of political commentary in both Bay’s direction and Chuck Hogan’s screenplay. It could be argued that the ostensible neutrality actually shields 13 Hours from becoming the next hotly-contested political drama, a fate Eastwood’s chronicling of the deadliest sniper in American history fell victim to last year — though shots of a topless (and completely ripped) John Krasinski, who plays experienced military man Jack Silva and the montages of substantially muscly men doing substantially muscly-man things like flipping over massive tires and knocking out pull-ups like it ain’t no thang, does nothing but prop America up on a pedestal that the innocent Libyans pictured herein have nary a prayer of mounting themselves.

Bay tries to do the right thing and account for some semblance of goodness in a city renowned for its hostility (Benghazi, along with Tripoli, has long been atop the list of most dangerous cities in the world). Two-thirds of the film centers on the desperate defensive stand the various ex-Navy SEALs and Marines attempt to mount as forces overrun the compound before setting their sights on the CIA annex a mile down the road. Amidst the chaos — the most coherent action set piece Bay has constructed in some time — he attempts to convey the mounting distrust between locals who sympathize with the Americans and those who are clearly anti-western civilization (read: the guys in the background who have a sullen look on their face).

In the end the freneticism, the emphasis on explosions and melodrama simply overwhelms and we, the visually-assaulted paying customers, cannot be held accountable for missing certain details such as who may be aligning with whom. But that’s what all but the most ardent of Bay supporters come to expect out of a film baring his name. Drowning in a sea of action is kind of part of the deal (and hey, at least Bay offers quite a lot of opportunities for stunt men). 13 Hours doesn’t offer particularly incisive commentary; it’s more observation and opportunistic than eye-opening. The performances aren’t worth much either. The best thing I can say about it is that it is Michael Bay-lite. 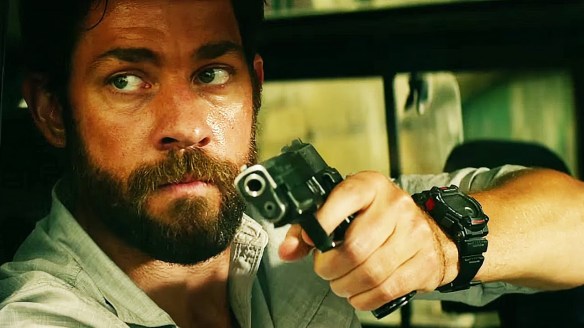 Recommendation: Come for the explosions, stay for the headache. 13 Hours: The Secret Soldiers of Benghazi manifests as arguably Michael Bay’s best film in years, but does that mean it’s any good? For this reviewer, no, not really. As much as I like the guys from The Office (Krasinski is reunited with David Denman here), they have absolutely no screen presence and the long stand-off gets old fairly quickly. The bravery on display can’t be discounted however, and for that Bay and his crew deserve at least some credit.

Quoted: “I haven’t thought of my family once tonight. I’m thinking about them now.”

24 thoughts on “13 Hours: The Secret Soldiers of Benghazi”