For future generations, when kids look up the word ‘nostalgia’ in the dictionary, they’ll just see a poster of The Force Awakens beside it. And, you know, that’s cool. I can’t say that would be a poor definition.

I guess what I’d like to see is a little asterisk directing attention to the footnotes, where John Crowley’s Brooklyn would get at least some recognition for its heavily nostalgic appeal.

Here is a gorgeously mounted production, the culmination of inspired performances from rising stars and notions of old-fashioned romance steeped absolutely in nostalgia. A labor of love propelled by an urgency to prove ‘old-fashioned’ isn’t necessarily synonymous with ‘old hat.’ Okay, so the film is set several decades ago but its consideration of foreign environments and experiences resonates strongly in the wake of the Syrian refugee crisis. And any American watching on is sure to be reminded of their own border crisis with their southern neighbors.

I should probably stop myself there. This film needs not to be introduced as some polemic political statement. Immigration isn’t so much problematic as it is traumatic. At the same time, Brooklyn shouldn’t be misconstrued as a film that romanticizes the immigration process. In this film life is far from a fairytale — it’s tough, and so it should be. Driven by emotion, it depicts the conundrum Irish immigrant Eilis Lacey (Saoirse Ronan) finds herself in having left the comforts of sleepy Enniscorthy behind to pursue a life in the States. Story ultimately measures the success of its protagonist on the basis of her ability to overcome (or perhaps embrace) notions of familial customs, cultural acceptance and personal growth.

Screenwriter Nick Hornby adapts the 2009 Colm Tóibín novel of the same name, fashioning a drama that warms the heart as effortlessly as it breaks it. Though the story certainly drifts and never forms into something entirely unexpected, the more contemplative scenes play out naturally, unburdened by structure, and are rather potent given the conditions the protagonist must endure for some time. It all feels a little less aimless when Eilis meets the kindhearted Tony (Emory Cohen), a boy from an Italian family whose confession over liking Irish girls — hence his presence at a small get-together put on by Irish Brooklynites — endears him to her.

And so it is: Brooklyn becomes an acting showcase. Cohen turns out to be nothing short of a revelation. His Tony oozes the kind of charisma most Movie Stars today wish they were gifted with. He may not light up as many cigarettes or don any leather jackets, but Cohen has that James Dean swagger. Tony is the kind of stand-up guy who merits comparisons to the likes of Romeo Capulet and Jack Dawson. In that way, the film aches with nostalgia for the days where genuinely good men fell into genuinely romantic relationships, not contrived meet-cutes in which the likes of Gerard Butler and Justin Long find themselves flung into . . . because, script.

In this movie our ultimate concern revolves around relationships, but that’s not for a lack of ambition. For someone trying to assimilate to another part of the world, establishing relationships is a crucial step. It’s the only step at first. Through a deeply introspective character study Brooklyn proposes that one little step can form an entire bridge. For the thousands of people who have passed through Ellis Island and elsewhere, it can be a matter of life and death, and that’s not a reality the film takes for granted.

Of course, ultimately Eilis is a very fortunate young woman. And the film doesn’t take that for granted. Tony’s introduction tinges the film with a romantic filter. The light in an otherwise dark room. Call it a fairytale if you wish, but precious little feels good about the sacrifices Eilis must make in order to get to a good place. There’s nothing particularly magical about the background from which Tony hails. He may be a plumber, but he’s also a hard-working, good-natured young man who shows genuine interest in Eilis’ determination, intelligence and forward-thinkingness. If ever there were a couple who deserved one another’s company this year it is these two.

In the context of contemporary romantic offerings, Brooklyn reigns supreme in 2015, but don’t call it a perfect movie. Serendipity isn’t the right word, but a subplot involving her return to her homeland following a tragic development is rigged with convenience at every turn. Locals seem to conspire against Eilis ever returning to America: a friend is to be married a week after she is scheduled to return to Brooklyn and her mother accepts an invitation on her behalf; she is set up on dates with eligible bachelor Jim Farrell (Domhnall Gleeson, picking up steam now); Eilis is even coerced into taking over her sister’s desk job. People can’t seem to stop talking about Eilis’ good fortune. Time constraints come to define this phase of the story and some of these later scenes, and Gleeson’s character in particular, feel underdeveloped as a result.

But the purpose of the return journey is very well understood. Going back to Ireland adds complication. The second boat ride gives an already conflicted girl (and viewer) yet another perspective to consider. What if life in Enniscorthy actually could be different, more opportunistic? How radically has the girl changed in the time since? The transformation may not be so dramatic but it is certainly noticeable and remarkable. If it weren’t for such confident and prideful work from its young stars, the film wouldn’t be in a place where it could reasonably pose these questions. Brooklyn is stunningly authentic, incredibly enjoyable and the fact it so effectively communicates its reverence for classic cinema qualifies it as one of the finest this year has to offer. 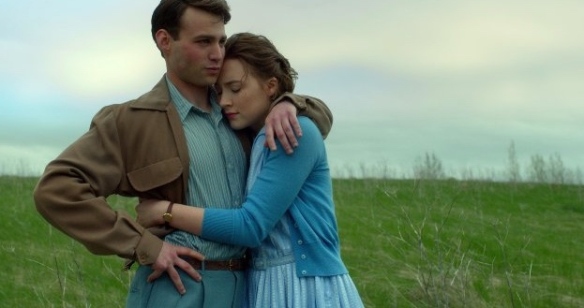 Recommendation: Brooklyn has classic romantic appeal, and with any luck it will attract a larger audience than its silly little trailers are likely to generate. Performances make the characters easy to buy into and feel for in the end, while a sublime 1950s milieu is too easy to believe as the genuine article. A great study of character, not to mention a great date night.

Quoted: “I wish that I could stop feeling that I want to be an Irish girl in Ireland.”