Our second stop this December on Throwback Thursday finds us head-over-heels in like (?) with a very unique girl. A hopeless romantic. A dreamer. A dream-weaver. Though this entry doesn’t strictly qualify as a film that spreads holiday cheer, it’s one that spreads cheer and is the definition of a feel-good film. It’s a testament to the combined strengths of the performances, some delicious cinematography and memorable visual effects that I was eventually won over by this film. I was so very tempted to shut this thing off after about 40 minutes as it is a rather slow journey. But by the end I was actually kind of moved. For the second time this month I’m having a new experience with 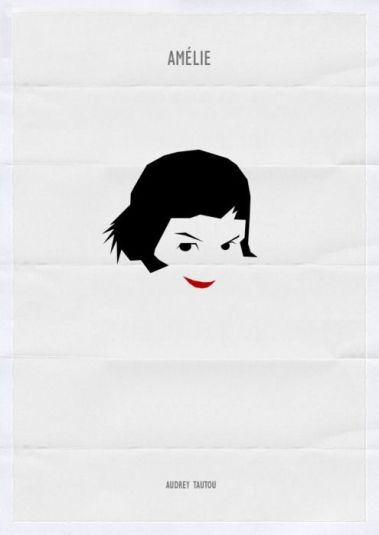 Romancing the City of Love since: November 2, 2001

The City of Love dazzles and shines in Jean-Pierre Jeunet’s fantastical portrait of a young girl touching the lives of many a downtrodden Parisian. It aches with a melancholy the warm yellow hues of Bruno Delbonnel’s cinematography (he helped set the mood for Inside Llewyn Davis with his distinctly colder, bluer photography) help offset, but only just. There are people everywhere but not much life to be found. People are shells of their former selves, save for Amélie, who has grown up in a unique but largely unenviable way.

Her parents, both hard workers but far from ideal caretakers — her father, never spending much time with her, had his only daughter incorrectly diagnosed with a heart condition; mother, a bit of an emotionally cold person who sadly lost her life in a most bizarre manner — effectively isolated Amélie from social settings. She was homeschooled. Amélie’s upbringing created many challenges for her, but that didn’t stop her from being curious about the world of which she was a part.

After witnessing the news of the death of Princess Diana and coming to the realization that life is all too fleeting, she became hooked on the idea of spreading joy to other people’s lives. She hoped maybe she could help them improve their outlook and in so doing, make her life have meaning. She sets about helping an older man recover a box filled with all sorts of memories from his past; a reclusive artist learn how to socialize; a young boy overcome his circumstances working for a nasty, ungrateful boss at a corner market. She even starts working her magic at The Two Windmills, a small café she has been working at, playing Cupid for one of her co-workers who can never seem to attract the attention she longs for from a regular customer.

It’s strange that someone who suffered such a cruel childhood could grow up to become such a romantic and an eternally kind-hearted person. In fact this protagonist is so incongruent to the way in which the real world works she comes across as a character only a movie could create. Amélie is a little girl nobody really seems to pay much mind to, yet she’s larger than life. I found it difficult to buy into her blossoming as a young woman. Not to mention, the film takes an eternity to get to where it really wants to go. The first half of this picture is nothing short of a slog as it sets about establishing dynamics between these many other lost souls who have all, in some way, shape or form had their hearts turned to stone.

Despite the unlikeliness of this enigmatic personality, it’s something of a task to resist her charms. Amélie may crawl like molasses spilling forth from the jar but it’s this process of slow absorption that finally won me over. I just couldn’t help it. I mean, how can you not fall in love with this girl, the short-cut, jet-black-haired woman with a perpetual twinkle in her eye that suggests she’s up to something? Parts of her recall Macauley Culkin in Home Alone, what with her mischievous nature as she goes to lengths to make life a little more difficult for the people who deserve it, while sending a potential lover, Mathieu Kassovitz’s Nino, on a whimsical journey across the city, scattering clues all over in an attempt to win his heart and, in effect, make her first true connection to someone in the real world.

And this is what, for me, made Amélie often a challenge to root for. She can be so helpless. She’s been programmed not to make direct contact with others, despite her affinity for passing through their lives like wind through the leaves on a branch. As the reclusive Dufayel observed, unable to conceal his disdain: “she would rather imagine herself relating to an absent person than build relationships with those around her.” It’s not all her fault of course but at some point it’s less about her failure to make that contact as it is her fault that she fails to do so on so many different occasions. “For Pete’s sake, go and get him!”

Indeed the film is nothing if not a traditional love story, steeped in karmic and coincidental reality. Amélie seemed destined to help others, but — and the film is almost too conscious of it — she’d be a fool if she would forget about her own happiness in the process. As the film builds into a crescendo composed of the efforts she has made to brighten others’ days, it begins to gain an unwieldy belly that, for the most part sits content, but often can feel a bit overstuffed and bloated. Engorged on sugary romance. Part of me wants to say this film isn’t exactly my tasse de thé and if it weren’t for Tautou’s mesmerizing performance I would have never made it past those first 40 minutes.

Recommendation: A film defined by its central performance, Amélie is one for romantics at heart and French cinema enthusiasts. While bearing some fantastical camera techniques that remind one of Charlie Kaufman, this is a decidedly more upbeat and optimistic film than anything he’s done. Entertaining, beguiling, entrancing. This is a pretty great movie and I was ultimately rewarded for committing to it.

TBTrivia: Of all the things this movie inspired, it wasn’t so much passionate love affairs, but rather the advertising campaign of Travelocity. Throughout the film, Amélie, in an attempt to inspire her shut-in father to get out and see the world, hatched a scheme wherein the family garden gnome would be sent to various famous international locales and have its picture taken and sent back to him. Hence, the Travelocity Gnome.