A Very Murray Christmas is kind of an odd package. It’s a fairly self-indulgent vanity project but only in the best way possible. I mean, how do you say ‘no’ to Bill Murray?

It’s a movie but not a movie; a musical but not really a musical; a short story without much of a tale to tell. It’s roughly an hour of Murray lamenting being left alone for Christmas Eve as he’s holed up in the famous Carlyle Hotel in Manhattan as a blizzard rages outside, preventing anyone from traveling anywhere and from taking part in his Christmas Special in which he is to live broadcast a number of classic tunes for the masses to enjoy.

Then the weather intensifies and shuts down the production, leaving him to his own devices in the hotel lobby, where he slowly starts gathering random hotel guests and staff members together for an impromptu session of Christmas caroling. In essence, this is Murray’s way of saying Happy Holidays without resorting to social media. It’s a live recording of him nudging even the grumps into the holiday spirit. He starts off the film in a lousy mood and slowly overcomes his depression as said guests gather round in drunken merriment.

Despite the aimlessness of it all, A Very Murray Christmas is a good bit of fun. It’s cozy and will fill your heart with warmth come the surprisingly entertaining introduction of Miley Cyrus and George Clooney in a bizarre dream sequence that results after Murray collapses in the hotel lobby after drinking one too many shots of tequila.

It’s a who’s who of the Murray entourage. The guest list is rather impressive: Amy Poehler, Paul Shaffer, Jenny Lewis, Maya Rudolph, Michael Cera, Demitri Dimitrov, Rashida Jones, Jason Schwartzman, David Johansen, Miley Cyrus, Julie White, Chris Rock, George Clooney (he seems to be owing Murray a favor after Murray did Monument’s Men) and members of the band Phoenix all donate their time to the cause.

Ultimately this is nothing you will regret having missed but for the Murray faithful, this Christmas special makes one feel as though this is the closest they can get to actually interacting with the great Bill Murray. That in itself is a gift. 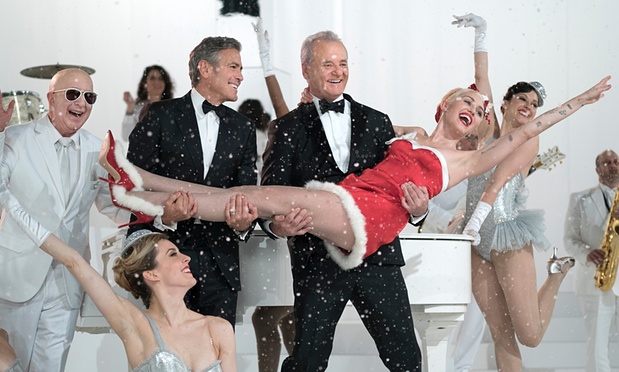 Recommendation: Fans of Bill Murray are going to greatly enjoy this while anyone else who isn’t so much a fan are probably going to find it a chore to sit through.

Quoted: “I don’t even know how to express my shame in this moment. The Murricane skulking down the back stairs like some $25 an hour, Twin Cities hooker.”

4 thoughts on “A Very Murray Christmas”