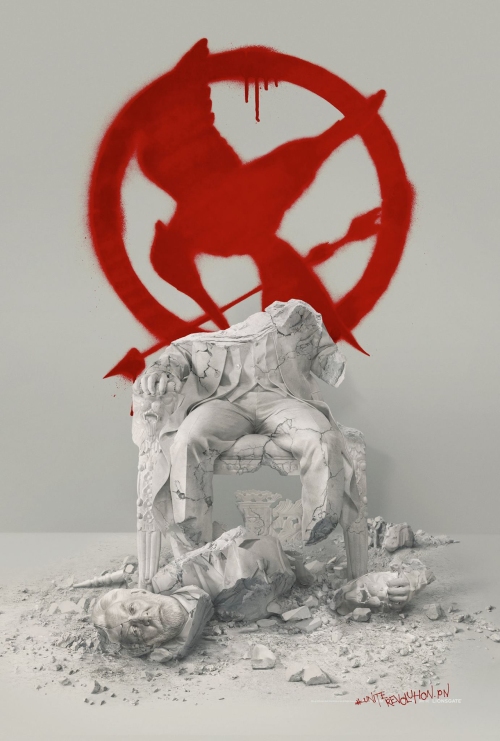 Take your best shot, Mr. Lawrence. I’m ready for anything. Or, I thought I was.

Four films, three years and nearly $2 billion in global box office receipts later, we arrive at the bittersweet farewell to a remarkable franchise, one that has been so captivating since its inception it hooked one of the biggest cynics I know of the young adult film adaptations from the get-go. That person is me. I tend not to give a lot of credit to these films, feeling so comfortable in my dismissal of many of these movies that when their poor performance (commercial and/or critical) pops up on my screen a few days later, my only response is a simple, satisfied chuckle. Then I click out of the screen and move on.

There’s been something markedly different about Katniss Everdeen and her targeted bow and arrows though. And I swear it’s not because I happen to think Jennifer Lawrence is really cute. Okay, well I suppose that helps. But Shailene Woodley is a babe too! I’m not going to mince my words here: physical attraction is a big part of it, but what has really helped up the ante for the cinematic treatment(s) of Suzanne Collins’ best-sellers has been an emphasis on genuine emotion filtered through an uncommonly bleak political lens.

Collins’ final novel being split into two films has caused quite the stir amongst passionate fans of both the film and book franchise, and while it’s difficult to argue the motives for expanding the HGCU (that’s the Hunger Games Cinematic Universe) into a quadrilogy are fueled by anything other than reaping financial rewards, I personally have enjoyed getting to spend this much more time with some truly well-developed and exceptionally memorable characters.

The Hunger Games: Mockingjay — Part 2, then, wastes no time in immersing audiences right into the psychological, and now physical, turmoil that has consumed the two victors of the 74th Hunger Games: Peeta is still suffering from the trauma he endured at the hands of President Snow having been captured after the events of Catching Fire, while Katniss recovers from neck injuries sustained in his attack upon her during one of his psychotic breaks.

The reality of this franchise ending is surprisingly difficult to reconcile. On one level, and as one might expect, this final chapter manifests as the most somber one yet as we watch the events of the previous films sculpt the faces of the familiar into expressions of deep despair, the weight of full-fledged war carried upon Katniss’ shoulders and anyone who has stood by her in the belief that the nation shouldn’t be subjected to Snow’s oppression any longer. There emerges a strong emotional rift between Katniss and Peeta, who can no longer be trusted. All that stuff’s easier to swallow when compared to the loss of Philip Seymour Hoffman though. In his final on-screen appearance, his Plutarch Heavensbee is notably less prevalent, yet his spirit, in all of its organic, non-digitized glory, leaves a lasting impression.

The stakes have never been higher, yet the premise so simple. To the surprise of no one, Katniss’ only goal is killing President Snow. Like, for real this time. Feeling restricted in her capacity as merely a symbol of hope for the people of Panem, she’s determined to get back to doing real damage and will abandon protocol laid out by District 13 leader Alma Coin that’s been set in place to protect her. She joins a squad of soldiers led by Boggs (Mahershala Ali) and Lieutenant Jackson (Michelle Forbes) who are tasked with following behind the other troops into the Capitol in order to film one final segment  for District 13’s anti-Snow propagandistic documentary.

Katniss of course is less concerned with the documentation as she is with finishing what she had started so long ago. In so doing, she must confront her deepest moral quandaries yet. The choices she must make as she marches through a Capitol that resembles Berlin circa post-World War 2, only outfitted with death traps that make the Quarter Quell look like child’s play by comparison, will be next to impossible and will more often than not require her to decide how many lives she’s willing to sacrifice to secure a brighter future for Panem.

Lawrence has fared exceptionally well since taking over the reigns from Gary Ross who established The Hunger Games as an uncommonly intelligent and bleak young adult film franchise. Obviously it is author Suzanne Collins to whom we should be most indebted for conjuring such an elaborate and audaciously political system over which fans, both casual and dedicated alike, have obsessed. After all, it’s becoming increasingly difficult to separate those who have been faithful to the series just for the star power and the experience from those who have been so inspired by coetaneous themes of social and political injustice as to become more politically active.

When I inevitably buy the box set, I’ll in all likelihood be confirming the fact that rather than playing out as individual, disjointed stories, this franchise operates as a cohesive whole, cranking up the personal tension between Katniss and Snow methodically, assimilating audiences effortlessly over a three-year period by playing up the ruthless villainy of Donald Sutherland’s white-ness (not a reference to his complexion) versus the purity of the Girl on Fire and her intentions of restoring the balance. Maybe if it’s not the religion of the church of the Mockingjay that’s compelling, nor how supposedly faithful the films have been to the source material, it’s the level of conviction and passion in Lawrence’s vision.

Jennifer Lawrence has blossomed into a reliable actress and that’s largely thanks to her contributions to these large-scale, larger-budget spectacles. (Yes, David O’Russell, you may have her now but Gary Ross developed her skill set.) Her consistency will be one of the aspects I’ll be missing most in the coming Novembers. Nevermind Woody Harrelson and his kind and affable Haymitch. Stanley Tucci’s hairdo. Elizabeth Banks and her eternally upbeat Effie Trinket. The nastiness of the Games, or of Sutherland’s tyranny. Indeed, if there is one word you could boil these films down to, it’s just that: consistent. That’s a rare quality to find in a franchise these days. Just ask the Terminator.

Recommendation: A lot can be said about the decision to split Mockingjay into two parts but this reviewer is a fan of it. It’s given me time to enjoy these characters more and the expansion of the series over four films/years has made for one of the most impressive film franchises I’ve ever seen. These films mean a lot of things to a lot of people, but if I were to make a recommendation for this film, it’s that you can appreciate it on its own almost as much as a part of a bigger picture. Almost, is the key word though. A spectacular finish to an uncommonly engaging story has been delivered.

Quoted: “Our lives were never ours. They belong to Snow and our deaths do too. But if you kill him Katniss, if you end all of this, all those deaths . . . they mean something.”