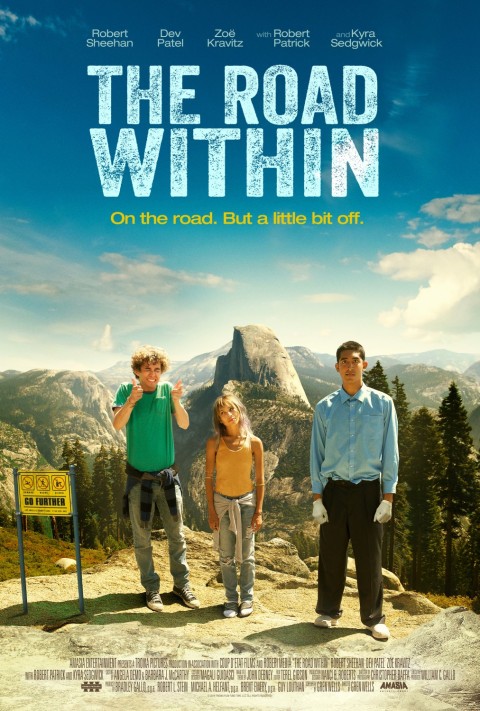 The Road Within is far from a realistic take on how mental illness affects one’s ability to socially interact but I’d be lying if I said it isn’t incredibly uplifting and heartwarming. Gren Wells has created a wonderful pick-me-up and that’s all you really need to know.

I suppose I could go into more detail, else this would be the shortest film review ever.

The schmaltzy-titled film follows a trio of teens who break out of a mental health facility and embark on a three-day expedition during which they bond, sharing in their anguish and collective suppressed emotions. The goal of the journey is for Vincent (the emerald-eyed Robert Sheehan), who has Tourette’s, to reach the ocean and scatter the ashes of his recently passed mother. He is joined by his roommate Alex (Dev Patel), a boy of similar age who is perpetually overwhelmed by his obsessive compulsive disorder, and a girl sporting purple-dyed hair played by Zoë Kravitz. Her name is Marie and she’s battling anorexia.

Vincent’s father ( Robert Patrick), unable to cope with his son’s turbulent behavior in the wake of the tragedy, sends him away to this facility run by Kyra Sedgwick’s Dr. Rose, a counselor who means well but is fairly incompetent. Given her hands-off approach and Vincent’s determination, the mechanism for the story’s development still feels a bit too clumsy: all it takes for Vincent’s wishes to come true is for Marie to stumble upon his room one day, flirt ever so slightly with him, and then steal doc’s car keys. It’s fairytale-esque how easily they are able to break from their shackles (and a tiny bit naughty — she stole car keys, thief . . . THIEF!)

The Road Within doesn’t play out as something that would happen in real life yet the adventure is too much fun to dismiss altogether. It features an incredible performance from the young Sheehan, who I was convinced actually had Tourette syndrome. His brown curly hair a perpetual mess and his face beset with worry, Sheehan’s Vincent is hugely empathetic despite his inability to control his temper when his tics have subsided. The 27-year-old actor masterfully steers his teenaged character through emotional turmoil that’s in addition to his literal knee-jerk reactions and spasms. That it becomes difficult to watch on occasion (and listen to — be prepared for a stream of profanities in the early going) is a credit to how committed Sheehan is to inhabiting this head space. It’s easily the crowning achievement of the film.

Less effective, but affecting nonetheless, are Patel’s Alex, whose crippling paranoias have him constantly wearing latex gloves and render him unable to slap his newfound friends a high-five in a brief celebratory moment, and Kravitz’s headstrong yet visibly physically unhealthy Marie. Over the course of their adventure, one which finds the actors juxtaposed against the breathtaking backdrop of Yosemite Valley, their precarious states begin to act as a galvanizing agent — “we’re all sick so we aren’t that different from each other” — though frequently the development rings hollow. I simply couldn’t buy into how quickly the characters moved past their severe illnesses, shedding symptoms as if they were layers of clothing.

The story isn’t completely lacking in validity. Vincent finds himself attracted to Marie (naturally), a development that only compounds Alex’s sense of loneliness and frustration over his condition. While romance is hinted at, it’s wisely handled with vulnerability and even an air of distrust. And while the melting of Vincent’s father’s icy exterior over the course of the story as he and the doctor set off in pursuit of her stolen car and the three renegades similarly sends up red flags, Robert Patrick has the acting pedigree to make the sudden shift somewhat legitimate.

One need look no further than The Road Within‘s emotional conclusion to find everything that’s wrong, and right, with Wells’ handling of the material. It tidies up much too quickly and leaves viewers with the impression that the hellish travails prior to the kids’ rebellion will no longer exist; this is a happily-ever-after for people who sadly do not travel down such a finite road. Mental illness, like an addiction, is permanent. It’s inescapable. It’s infuriating. However, none of these shortcomings are enough to drown the piece. It may be sentimental and unrealistic but The Road Within is immensely enjoyable. It’s optimistic and upbeat, easy to embrace. This is the kind of film you’ll want to reach for when you find yourself enduring a particularly rough stretch, even if you may not suffer from any kind of ailment at all.

Recommendation: The film has its flaws — and quite a few of them — but this is a winning road trip comedy that I recommend on the backs of an incredible performance from Robert Sheehan (as well as Dev Patel and Zoë Kravitz). Upbeat and entirely inoffensive (save for the litany of swear words in the opening third), The Road Within offers something for all but the most cynical of viewers.