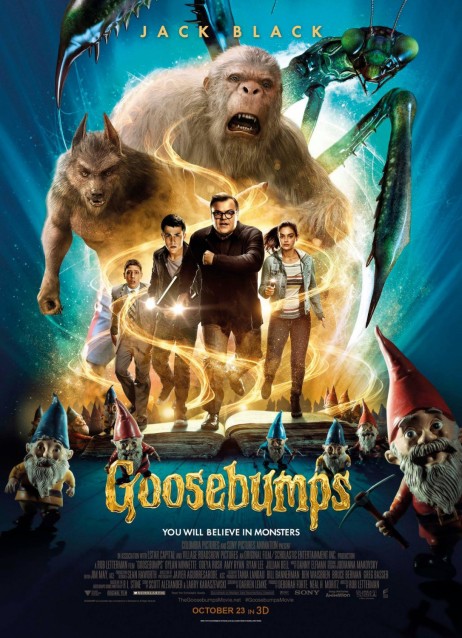 If anyone asked me what got me into writing, I would tell them it was R.L. Stine. I wanted to be like him so much I came up with my own ghost stories as a kid; I even started mimicking the artwork that made his books unique . . .

.  . . and so, in 2015, they decided to make a Goosebumps movie. Not that I asked for it, or expected it to come now, some 20 years removed from the peak of Stine’s popularity (to give that time frame some context, this was the era of the flat-top haircut, Walkmans and quality children’s programming on Nickelodeon).

But of course it would happen — how could a book series that became so endeared to millions of impressionable pre-pubescent minds not get picked up by a studio and be given a new lease on life? How is Goosebumps anything other than an inevitability? The good news is that the film is actually worth seeing; this is as good as inevitable gets. Forget the fact you and Jack Black may not get along; forget your inner child wanting to rebel against the cinematic treatment, for you’d be lying to yourself that the only place Stine’s monstrous creations should live are in the pages of the books or in your memory. Getting to see the Abominable Snowman on screen is a kind of privilege. Better yet, seeing (and hearing) Slappy the dummy physically make threats is believing.

Everyone knows the series wasn’t exactly substantive nor inventive. Categorically predictable and breezy reads, they were defined more by the creatures that inhabited the pages, many a variation on ghostlike presences but sometimes branching out to include more obscure objects — who remembers ‘Why I’m Afraid of Bees’ or ‘The Cuckoo Clock of Doom?’ That their intellectual value was the equivalent of nutrient-deprived cereals like Captain Crunch’s Oops All Berries didn’t mean they were devoid of value completely, and on the basis of sheer volume — the original series which lasted from ’92 to ’97 included 62 titles — you couldn’t find many more book series geared towards children that were quite so exhaustive. Their longevity is owed to the fact Stine never tried to do anything fancy with them. The set-up was simple: stage a beginning, establish a middle section and cap it off with a twist ending.

Naturally, a film dealing with these very creatures and the author who dreamed them up, if it had any interest in reconnecting with a by-now fully-grown and steadily more jaded audience, would find formulaic storytelling appealing. What Rob Letterman has come up with is safe, harmless, occasionally eye-roll-worthy. What it’s not is scary. More importantly, it’s not a disaster.

Zach (Dylan Minnette) and his mom (the increasingly busy Amy Ryan) have just moved to Nowheresville, Delaware (the town is actually called Madison, but it’s the same thing) after the passing of Zach’s father. Zach makes a friend almost immediately in his next door neighbor, Hannah (Odeya Rush), but is just as quickly intimidated by her creepy father, who introduces himself as Mr. Shivers (Jack Black) — but we all know that’s a front. Even the 11-year-olds in attendance can see through that, what with his exceedingly thick wire-framed glasses and generally strange demeanor. The new-kid-in-town premise is, yes, exceedingly dull, particularly when it feels obliged to deal in a few fairly annoying characters who help expand the environment beyond Zach’s new home.

So far, so ‘Goosebumps.’ The stories never compelled on the virtues of their human characters. It’s not until Zach invades Hannah’s home (the fine for breaking and entering doesn’t faze this kid) upon hearing screams coming from her room that he discovers a small library filled with old ‘Goosebumps’ manuscripts. When he opens up a book, the fun begins. A monster is unleashed upon them and it’s up to Hannah to try and contain the chaos before her possibly psycho-father finds out. Unfortunately it’s not just the one creature they have to worry about. Soon every book starts unleashing their contents upon the small community and wreaking all kinds of PG-rated havoc, a development that’s better left unspoiled.

It’s up to Zach, his newfound friend Champ (Ryan Lee, who falls decidedly into the ‘fairly annoying’ category), Hannah and the loner author himself to save Madison from being overrun by a combination of lawn gnomes, giant mutant praying mantises and monster blood. It helps to think of Goosebumps as a ‘Best of’ Stine’s monstrous creations; few creatures truly stand out (save for everyone’s favorite talking dummy, voiced by Black) but what it lacks in quality it compensates in quantity. Once again mirroring its source material, the film benefits from sheer volume of creative CGI and lavish costume design rather than going into detail on any one thing.

It should go without saying such genericness will hardly compel viewers to champion its award potential. In fact, if you’re expecting quality of any kind outside of how strongly the film tugs on the strings of nostalgia, you’re setting yourself up for failure. Don’t expect any goosebumps to form on your skin come the frantic, rushed conclusion.

Recommendation: Very much a pleasant surprise in terms of the memories it brings back and the entertainment value provided by a game cast, Goosebumps‘ cinematic presentation won’t linger very long in the mind, but luckily enough it won’t have to as a sequel is all but a sure thing. With any luck that will also become a fun trip down memory lane. Anyone who read at least a few of these books should find this a perfectly acceptable rental night at home with the kids.

Quoted: “All the monsters I’ve ever created are locked inside these books. But when they open . . . “