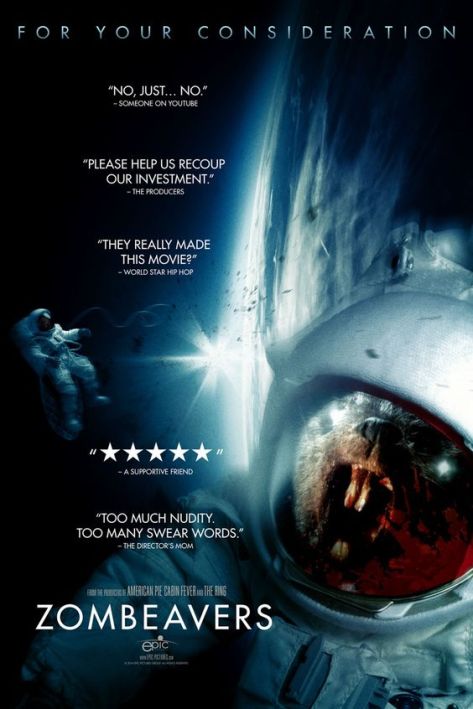 Only, these ain’t your garden variety, floppy-tailed rodents. These are zombified psychopaths, demons of the dam-building underworld with teeth so ferocious and agendas so sinister (chewing a log cabin into destruction) that you’ll be left begging for mercy. Either that or the remote.

College students Mary (Rachel Melvin), Zoe (Cortney Palm) and Jenn (Lexi Atkins) are getting away from it all after Jenn finds out her beau is more like a ‘booooo’ after he admits to cheating on her. Naturally, this is a no-boys-allowed trip. No cell phones, no texting, no Twitter bullshit — just sunbathing by the lake and drinking all night in their cabin. Unbeknownst to them, however, a container filled with some kind of green toxic sludge has recently tumbled into that very lake after falling off of the back of a truck somewhere nearby.

Clad in skimpy bikinis, the girls go and investigate the sizable beaver dam that stops up one side of the small pond that Zoe intends to go skinny dipping in. Lurking inside that very structure are the rodents that will soon become the source of all their suffering. While checking it out they come across a redneck with a shotgun (do I smell a sequel to Jason Eisener’s 2011 action-comedy thriller?) who seems more interested in checking out the girls head-to-toe than properly placing the bear traps he is seen carrying around. Immediately we recognize this guy as their future last-chance savior. I mean, he’s got a gun and a beard and everything. Plus he’s creepy so there’s the inherent character flaw he’s destined to overcome by movie’s end.

Sadly quite literally everyone else in the film face no such character arc or potential redemption. Every person in this film proves to be challenging to spend more than 10 minutes with. For some reason though, it’s okay. We know these people aren’t meant to last. We know we’re not supposed to be able to get past their insufferable personalities — Palm clearly has a field day playing up Zoe’s awfulness (sorry Zoe . . .) — and we know that the inadequacy of these individuals’ survival skills is secondary to watching CGI animals attack, maim and even kill.

We know all of this because writer-director Jordan Rubin knows exactly what kind of film he’s making. Zombeavers embraces its madness (and clichés) unapologetically. Nowhere is that more apparent than during the random scenes shot from the point of view of these soon-to-be-terrifying creatures, or while listening to the absurd sounds they make, or while staring them directly in their damn beady little eyes as they wait for the moment to strike, concealed by the dark cloak of night.

While it would be nice to one day live in a world where these direct-to-DVD horror comedies could work using characters that we can actually sympathize with, what’s far more important is how confidently these productions carry themselves. And Zombeavers is pretty committed, taking a ridiculous premise and cranking up the Ridiculometer to 11 until it arrives scratched, bloodied but not broken at its semi-logical conclusion.

If you have to ask why or how this movie was made, perhaps you’ve already made your mind up about whether or not you’re going to be watching it. Zombeavers. Enough said. 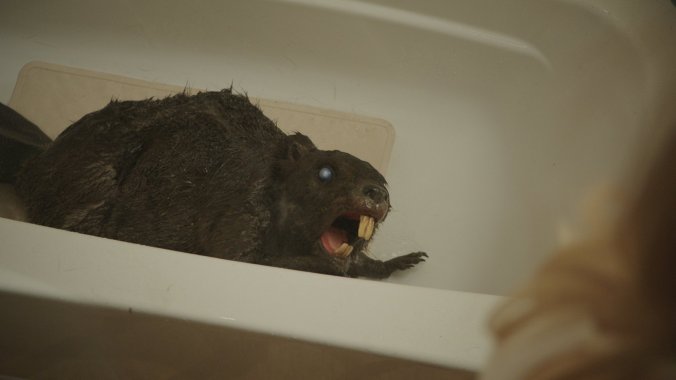 Recommendation: A bad movie that knows it’s bad and in fact embraces its . . . badness, Zombeavers is one to watch if you want to sink your teeth into something that’s completely and utterly brainless (and suitably gory). Films like these have reputations for being wastes of time but this time, I actually think this was time well wasted.

Quoted: “We cannot turn against each other right now. That’s exactly what the beavers would want.”