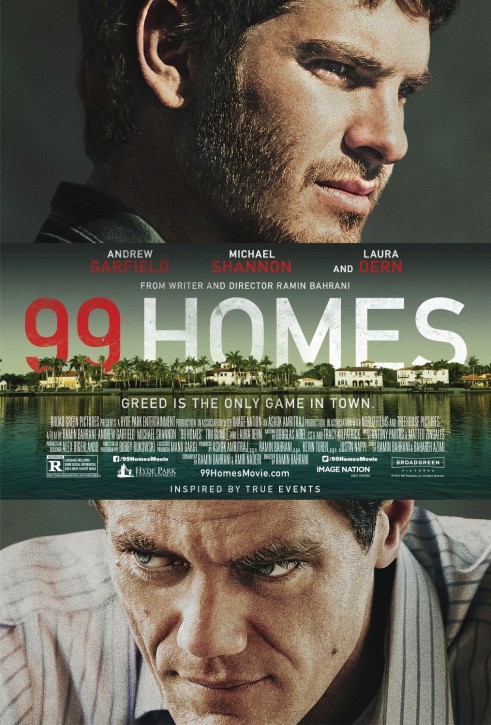 I have tried several different ways of expressing my enthusiasm over this movie about the housing market collapse of 2008, but each time I have failed. For whatever reason I’m struggling to make things like home foreclosures and adjustable mortgage rates sound exciting. Yet that’s exactly what 99 Homes is — thrilling, unnerving, emotionally resonant.

It’s particularly well-acted, and that goes a long way in getting an audience into a movie that’s based upon and set in the very economic times in which we live and from which many are still recovering. I suppose you could make a case for this film being skewed towards the homeowners in the audience but that’s a pretty pretentious target audience, don’t you think? 99 Homes must have something to offer that’s more universally appealing than showing just how disconcerting it is for a head-of-house to no longer be able to provide shelter for his family; that there is now officially a time where he will be “trespassing” just by standing at his own front door.

Andrew Garfield plays an indeterminately late-20/early-30-year-old construction worker named Dennis Nash with an almost immediate and effortless charm. Dennis lives in Orlando with his mother Lynn (Laura Dern) and his own son Connor (Noah Lomax) but is seen in the beginning fighting in court to keep the home he and generations of his family have lived in. Facing eviction after three months’ worth of overdue mortgage payments, the Nashes seemingly are given a second opportunity when Dennis is told they will have 30 days to appeal. The next day (or perhaps a few days later, timelines aren’t made abundantly clear) a real estate tycoon by the name of Rick Carver (Michael Shannon) shows up at their door and delivers the bad news.

There isn’t a comic book in sight as Spider-Man and General Zod square off in this political parable in which Rick Carver, a man who makes the seething Kryptonian warlord look like a saint, works with alarming efficiency in kicking the Nashes to the curb and coldly informing Dennis they have until the end of the day to get rid of whatever personal effects they have — now scattered on the front lawn — else their neighbors will be entitled to pick through it. It’s one of a few scenes that are surprisingly uncomfortable to sit through.

Perhaps it’s going too far by describing this as difficult to watch — it’s not as visceral, nowhere near as violent as the drama that drives hyper-realistic films like United 93, World Trade Center and JFK — yet the authenticity of Ramin Bahrani’s timely film is just as sobering. 99 Homes masterfully embitters us to these harsher economic times, refusing to resort to action sequences or melodrama to express its outrage over the consolidation of power at the corporate level. Not to mention, the stripping of it from the average Joe.

Desperate to find work, Dennis takes up an offer from the very man who has just kicked him out of his house. Rick will pay him $50 for a clean-up job on a property he’s about to inspect. Dennis cleverly turns that $50 into $250 after impressing Rick with his work ethic. As this is going on he’s having to deal with life in a motel room, a motel that seems to be sheltering several other families and individuals enduring a similar situation. Dennis reassures his mother and son that he’ll do whatever it takes to get the house back, though he stops short of going into detail about how he’s earning the money.

As the weeks go by Rick takes note of how fast Dennis is learning and adapting, and in turn, Dennis’ income steadily increases as he graduates out of literal shit work and into more lucrative positions, such as the guy who gets to forcefully remove people from their homes. The irony of his employment status reaches a fever pitch when he’s forced to deliver a fabricated document from Rick’s office to the courthouse, a move that will all but ensure the eviction of a man whom Dennis has known for some time because the man’s son goes to the same school as Connor. Caught between a rock and a hard place, Dennis turns the document over, unable to face the consequences of losing his job.

I suppose there is technically some superhero influence to be found here, despite Ramin Bahrani’s every effort to keep his production grounded in reality. Garfield’s slide from decent, hardworking American father into greedy, shortsighted and frightened real estate agent epitomizes Harvey Dent’s veiled critique of the Dark Knight’s vigilantism. “You either die a hero, or you live long enough to see yourself become the villain.” While it is the writing that must judge the transformation such that it occurs neither too quickly nor too deliberately, it’s up to Garfield to sell his character as someone who has lost their way profoundly.

We’ve seen this kind of hypocrisy before, in fact it’s a fairly popular narrative device, defining everyone from misled youths to overzealous superheroes to working class fathers seeking the perfect Christmas gift for their children. Yet it’s against this backdrop of a severe recession where the blueprint feels inspired, where an otherwise predictable character arc feels less predictable. The still up-and-coming Andrew Garfield gives a rousing performance in the lead, and is supported ably by an intense and malevolent turn from Michael Shannon. Between the two of them, there’s plenty of real estate to value and cherish in this urgent and relevant drama. 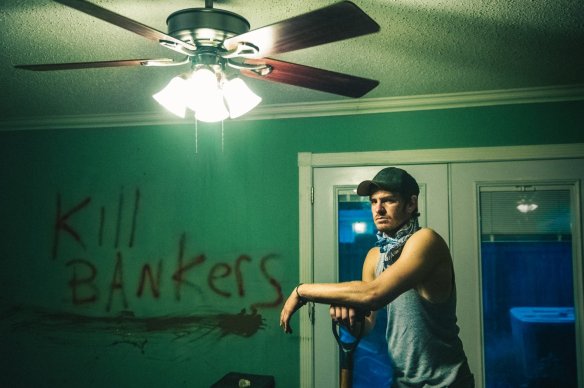 Recommendation: 99 Homes, somewhat ironically, does not exactly sell itself. It’s a film about the housing market collapse and there’s no denying that’s going to be a turn off for many theatergoers, but if you’re a fan of either actor involved here I urge you to give it a shot. It’s surprisingly compelling, tense and beautifully mounted and the performances in particular tend to stay with you.