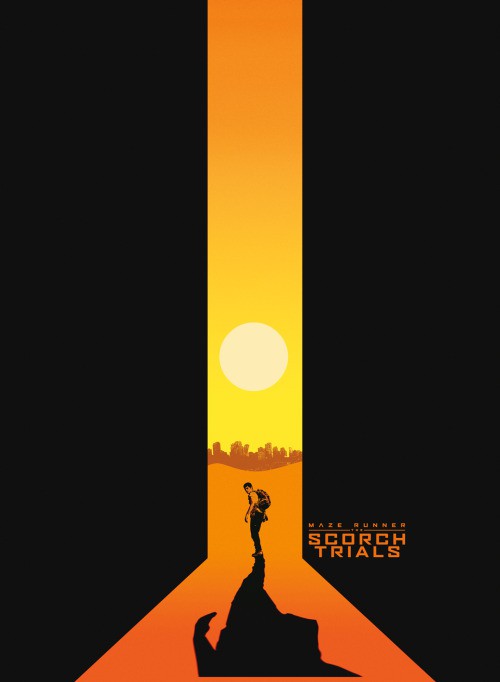 All this running and what, no exhaustion? One would think these kids were all born Olympians but in the interest of staying alive, I suppose running is what one must do. Wouldn’t it be funny though if Thomas just suddenly stopped in his tracks and pulled a Forrest Gump . . . and not the spry, hungry-for-life Forrest Gump we most often recall, I’m talking about the generally-over-life Forrest Gump: “. . . I’m pretty tired. I think I’ll go home now.”

Actually, I’ll admit that that was something I said towards the end of this ever-plodding, aimless sequel to last year’s sci fi adventure about a group of boys who are herded together and put into a mysterious maze-like complex with little chance of escaping, and even less chance of getting laid, but I guess that’s not part of it. Where the franchise-opener benefitted from originality — a relative term seeing as though this marks yet another Young Adult film adaptation designed to entertain all those youngsters with fewer things to say to one another thanks to their nifty iPads and SnapChat customizability — The Scorch Trials retreats into the shadows of its predecessor.

Wes Ball continues feeling uninspired in his adaptation of the James Dashner series, expanding the setting from a cramped ‘maze’ to a world overrun by sand dunes and crumbling edifice, assuming bigger automatically means better. The Scorch refers to the territory that lies beyond the confines of the facility Thomas (Dylan O’Brien), Minho (Ki Hong Lee), Teresa (Kaya Scodelario) and Newt (Thomas Brodie-Sangster) have since been taken to having escaped the glade. This is a place where they can mingle with the many other maze survivors. While they have been provided comfortable beds and proper meals three times a day, Thomas is unable to shake the feeling that they’re still under the control of WCKD, a mysterious organization supposedly created to find a cure for whatever nearly wiped out the entire human race.

The compound’s leader, a thoroughly generic Aiden Gillen (through no fault of his own) as Janson, tries to ensure Thomas that nothing sinister is afoot. But because Thomas is The Chosen One, he doesn’t believe him and has to find out what’s really going on. He meets loner Aris (Jacob Lofland) who shows him a secret passageway that leads them to discovering the horrible truth: indeed this place isn’t a safe house, it’s a testing laboratory. Indeed, this is as dystopian as The Scorch Trials gets. Bodies hooked up to machines, aligned in row after row after row as far as the eye can see. A literal body farm. The scene is fairly reminiscent of Neo’s horrifying discovery when he wakes up in the Real World after taking that red pill.

Finally, enough’s enough for Thomas. He decides he’s going to flex and bust out of this facility, taking along with him his loyal followers despite their hesitation. The remainder of the film sees the group, with the addition of two newcomers in Dexter Darden’s Frypan and Alexander Flores’ Winston, venturing out into the wasteland where they face death at the hands of zombie-like creatures known as Cranks, death by brutal exposure to the sun, and death by starvation, which appears to be the last thing these hardened warriors are going to succumb to. Even with scant resources, these kids seem impervious to hunger pangs. Thomas sets his sights on locating a group of mountain-dwelling people, survivors who have banded together to form The Right Arm, a primitive army ready to strike back at WCKD for their experimentation on whatever remains of mankind.

It is with this outlying community — the sequel’s raison d’être — Thomas attempts to join forces and plot a retaliation against WCKD. It helps to think of Thomas as a diet version of Gerard Butler’s Leonidas, leading his fearless (or just speechless) men and a couple of female survivors of another maze into battle against a likely insurmountable force. I suppose this development, especially after miles of plodding through desert, generates some excitement for the next chapter, The Death Cure. The Scorch Trials does end in a rather intense gunfight that, while wholly predictable given at this point in the film anything fits into that category, by comparison feels quite thrilling.

By the time we’ve stopped running it’s unfortunately all too apparent that The Scorch Trials is a tread-water sequel, offering too many action set pieces and too few character enriching moments. O’Brien still isn’t a very engaging screen presence, though he’s far from unlikable. Save for Barry Pepper, who pops up out of nowhere as a bearded post-apocalyptic hippie named Vince and Giancarlo Esposito as the mysterious Jorge, the adult roles either aren’t worth discussing (Patricia Clarkson and Alan Tudyk apparently are in this movie) or they simply don’t exist. That’s less of an issue in the grander scheme of things though, as I’m confident there was enough adult supervision on set of this middling action adventure flick aimed at audiences still having to sneak into films with an R rating.

Recommendation: I should probably emphasize this review is written from the perspective of someone who has not read the book series, nor the prequel series. I typically do not read source material before seeing a film but in this case, I’m wondering if having prior exposure to this world might enhance at the very least the performances. Having some sort of comparison between what the director gets right and what he chooses to do away with (according to some that was actually quite a lot) might’ve added to the experience. As a newcomer, I just couldn’t find a way into this.

Quoted: “I’m a Crank. I’m slowly going crazy. I keep wanting to chew off my own fingers and randomly kill people.”