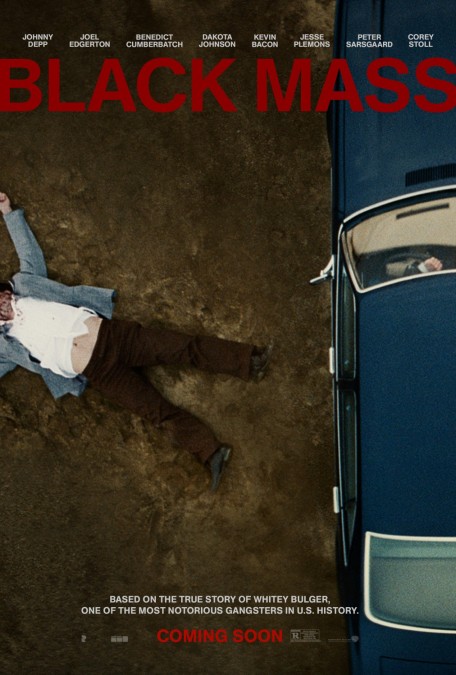 In Scott Cooper’s third film, Johnny Depp is one bad man. How bad? Bad enough to make the stench of his Charlie Mortdecai finally drift away, sure. But now another question is bugging me: what does he do after this? How long does Irish-American thug James “Whitey” Bulger define Depp?

I suppose only until the next ill-advised project comes along, but I shouldn’t get ahead of myself too quickly. We ought to bask at least a little longer in this moment. His recent disasters notwithstanding, one thing hasn’t really changed about the actor: he is talented. The problem has been one of motivation; a preference for taking easy money instead of actually working for it. As much as that annoys me, I’d rather it be that than the man simply getting a case of the yips. (Do performance artists get the yips?) The talent didn’t disappear, it just went into hibernation . . . for several years. Now it re-emerges, volatile, unpredictable and explosive as he assumes the profile of one of the most notorious crime lords in American history.

Over the course of a short two hours — particularly short given the film’s slow-burn approach — Black Mass builds a damning case against not only Bulger and his reputation amongst both friends and enemies, but against the FBI. For obvious reasons the criminal activity is alarming, but there’s something just as unnerving about the ineptitude of the prominent law officials who fail for so long to gain the upper hand. In explaining just why that was the case, Black Mass becomes as seedy as the city it skulks around in, feeding bleak and ominous cinematography to viewers who, in all likelihood, are more curious as to how Depp fares than how his character does.

The film ratchets up the tension tracking the rise and fall of a tenuous relationship, rarely offering respite. Bulger and FBI agent John Connolly (Joel Edgerton) grew up together on the streets, with Connolly being something of an admirer of the notoriously ruthless criminal. That’s sort of how he’s talked into becoming an informant as a way to eliminate the Italian contingent of the Winter Hill Gang, who have been encroaching on Bulger’s South Boston territory. Conducting ‘business’ with Bulger is the kind of stunt that proves to be a hard sell for Connolly to make to his peers and especially his boss, Special Agent Charles McGuire (Kevin Bacon). Bulger has, of course, a few protective barriers that make his arrest nigh on impossible. His brother Billy (Benedict Cumberbatch) is the mayor of Boston while Whitey’s reputation around town provides the movie its quota of visceral, sudden deaths that are brutally staged and extremely well-timed.

Despite the few who are stupid enough to doubt or defy Whitey, Black Mass isn’t quite as physical as you might expect; it works best as a psychological drama involving a slew of characters that are as difficult to trust as their own unrepentantly hateful attitudes are to justify. Reminiscent of Cooper’s previous effort, Out of the Furnace, is a brilliant, character-driven screenplay that paints a portrait of organized crime and corruption that has infiltrated all levels of society. David Harbour is in as Connolly’s partner-in-crime(solving) John Morris, while Bacon handles Special Agent McGuire with aplomb . . . and a semi-ridiculous Boston accent. Notable criminal personalities are brought to life by the likes of Jesse Plemons (as Kevin Weeks), Peter Sarsgaard, Rory Cochrane, W. Earl Brown, and Bill Camp, all of which add tremendous depth to this portrait of a Boston all but overrun by violent criminal activity.

Indeed, Depp is not on his own here, even if his is the worst in a bunch of very bad seeds, and even if his presence will be the only one we’ll feel for a long time after leaving the theater. Cooper’s ensemble cast — including a reprieve for Dakota Johnson in the form of Bulger’s longtime girlfriend Lindsay and a random appearance from Adam Scott as a peripheral FBI agent — are largely to thank for the film’s inglorious depiction of corrupt and criminal ways of thinking. That Black Mass has such a stacked cast — another similarity to his 2013 blue-collar drama — means the admittedly pedestrian narrative has more room to breathe. These characters are intimidating in their own ways, distinguishing a story that we’ve seen redressed over and again by the likes of Martin Scorsese and Brian de Palma, even Michael Mann’s Public Enemies in which Depp portrayed another infamous gangster.

This film doesn’t quite glorify the lifestyle of Scorsese’s mean streets but if I’m even suggesting that kind of comparison (without feeling overly dramatic doing so), Cooper is clearly doing something right. Mark Mallouk and Jez Butterworth’s screenplay paints broad strokes, and there are several plot strands that disappear at a moment’s notice as we cover the roughly 10-year period in which Whitey rose to prominence. Even if it does leave a few questions unanswered, Black Mass remains unencumbered by a lack of meticulousness because it ultimately succeeds in provoking dread and fear. An evil empire was allowed to flourish under the FBI, and that part is more fucked up than anything.

In fewer words, Black Mass tries to stand out, whereas Johnny Depp actually does.

Recommendation: In a welcomed return to form for  Johnny Depp, Black Mass offers an acting showcase for everyone involved. Fact-based story takes us on a harrowing journey through the rough streets of south Boston of the ’70s and ’80s and while some parts could have benefitted from expansion, on the whole this is a story well worth paying to see on the big screen.