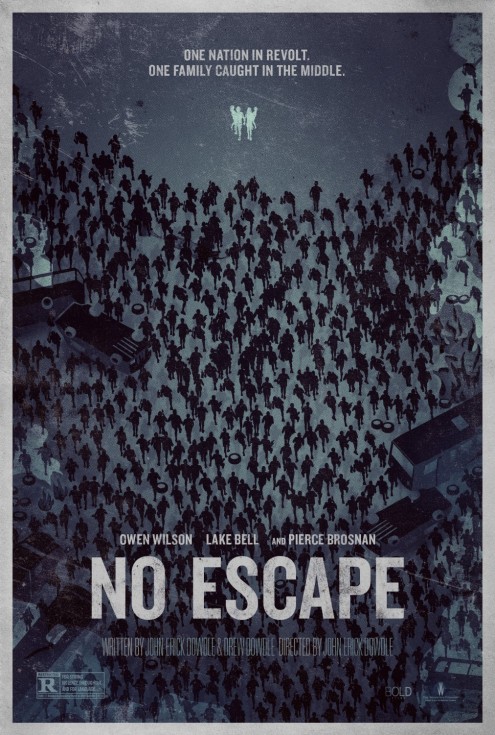 No Escape shouldn’t work as well as it does and yet, strong performances from an unlikely cast make for a taut thriller that plays to the tune of Taken, becoming an often absurd yet emotionally resonant tale of survival.

Owen Wilson finds inspiration in drama once again as family man Jack Dwyer whose recent job change has moved him, his wife Annie (Lake Bell) and their two daughters Lucy (Sterling Jerins) and Beeze (nine-year-old actress Claire Geare) to a nondescript Southeast Asian country. Feeling immediately displaced the family bumps into a friendly man named Hammond (Pierce Brosnan, in the ideal post-James Bond cameo) who helps arrange some transportation for them at the airport.

Jack has joined Cardiff, a conglomerate that distributes clean water to third-world nations. He reassures his older daughter that this job will be more stable since this company is much bigger than his old one. The one thing he doesn’t mention is that all they need now is to overcome some culture shock. And then come to terms with the fact that his very presence is about to put all their lives at risk when the city erupts suddenly in a violent and bloody revolt. It quickly becomes clear how unwelcome foreigners like Jack are in this place, as locals set about on a ruthless murdering spree that ends up accounting for three-quarters of the total runtime. Opening lucidly, the dialogue-lite narrative allows precious little time for Wilson and Bell to settle into these decidedly restrained performances as heads of household. But it’s just enough.

No Escape certainly isn’t complicated. This is a contemporary survival film, demanding the bare minimum from viewers in terms of intellectual engagement. In fact it is so plot-less — we watch as a desperate family clings to life bouncing from point A to point B — drama develops emotionally rather than logically, à la Taken. Simply ignore all the (good) changes of fortune this family manages to experience throughout this harrowing adventure. If you are able to mentally block out the fact that in this world Asians are either the ones doing the killing or the ones being killed, you are all the better for it. With a little luck those feelings of resentment, annoyance, maybe even anger born out of the injustices we are forced to watch eventually will subside and yield some sense of relief come the film’s predictable albeit preferable conclusion.

Although I suspect leaving the theater completely satisfied isn’t going to be possible for a few. This isn’t the most pleasant film you’ll watch this year. The violence is brutal and virtually unrelenting from the half-hour mark onward and, as it was in another Owen Wilson-led drama set behind enemy lines, the bloodletting-as-demarcation-between-good-guy-and-bad-guy is ill advised. Nor is it a subtle technique; the Dwyers get so good at dodging bullets you might assume they stepped off the plane and into the matrix rather than an Asian country.

Yet this is hardly the film’s undoing. Where No Escape lacks in sensitivity and subtlety it compensates with a strong family dynamic. Wilson plays one of his most affable and natural characters in years, while Bell turns a new leaf as his loving, trusting wife trying her best to deal with such chaotic circumstances. There’s nary a sign of Bell’s comedic background here. The two children are realized honestly and convincingly, and best of all they aren’t saddled with the cliches that make kids in movies annoying and one-dimensional. Indeed, if there’s a reason to care at all about the film’s politics, it’s that this charming Western family doesn’t deserve to be any sort of target.

The Dowdles — John directed while his brother Drew wrote the story — don’t have the most original thriller in their pockets but their product isn’t false advertising. This is pretty thrilling stuff, even if the sociopolitical commentary is sloppy, and any attempts to immerse us in the culture are half-hearted at best. (Ironically the last thing we want is to be further immersed in this place once those first shots have been fired.) Brosnan bears worth mentioning as well, offering some much-needed grit as an apparent agent of the night, popping in ever so conveniently when the Dwyers seem to have met their fates. Hammond isn’t a well-established character but he’s also too likable to dismiss. Plus, you know, he’s got those skills that come in really handy. And a British accent that gives No Escape the facade of ‘international thriller’ it longs for.

From a strictly entertainment standpoint, the brothers Dowdle extract a consistently engaging journey out of chaos and hostility. The effort reminds us through solid performances and often confronting and pervasive violence, that there are few motivations stronger than a person’s will to survive.

Recommendation: Unquestionably flawed movie delivers the goods in the form of hard-hitting action sequences that go beyond mere visual panache. No Escape is trying to say something with its bloodiness, but unfortunately the script isn’t nearly good enough to warrant much comment on that. If, like me, you’ve been waiting for Wilson to do something different with his talents, then wait no more. His partnership with Brosnan is as entertaining as it seems on paper.

Quoted: “We’ve got to get ourselves to the American Embassy.”