In my third week of rummaging through the DVD shelves, I stumbled upon a little oldie that likely no one has ever heard of. And by ‘no one’ I mean quite literally the opposite. In fact if this is the first you’ve read about this film, don’t let the cold shoulder surprise you. 😉 Now, saying this anthology is well-known isn’t the same as saying it’s been well-received by everyone. The humor presented is of a . . . well, let me go into those details more below.

Today’s food for thought: Monty Python’s The Meaning of Life. 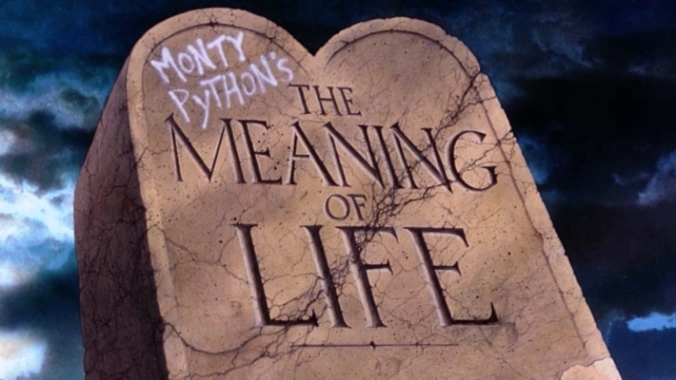 Let’s sit here for a minute and bask in my incredible profundity. But in all silliness, I can’t pretend like I can compete with Monty Python‘s bizarre yet ingenious embracing of platitudes such as, “what is the meaning of life? Why are we here?” I just don’t have the talent to make the mundane seem insane.

I was here before, some time ago, attempting to soak up all that this British force (or is that farce?) of comedic nature had to offer in its final feature presentation. Forgettable feels like the wrong word to use here but I was surprised in my most recent watch how many segments I felt like I was experiencing for the first time. I think it’s true of most things Monty Python that some jokes/skits land completely firm-footed while others simply crash and burn. This is certainly true of The Meaning of Life anyway, and even while it manages to avoid by a wide margin the comedy doldrums I regret to say that I will probably be forgetting those same parts in a few weeks’ time.

Of course, the opposite still holds true. That which The Meaning of Life succeeds in parodying or, to crib a British expression, taking the piss out of, has always been difficult to scrub from the memory. As much as I might want to pressure wash the walls of my brain of the images of an engorged Mr. Creosote or that particularly hasty live organ donation scene, these images and concepts are stains I can’t get rid of. All of this is to say that when Monty Python is good, it is very, very good. Fortunately, for this last full-length feature installment, the positives (still) outweigh the negatives.

The anthology unfolds chronologically, striving to answer that ever-elusive question, and while those fish in the fish tank are never impressed by how John Cleese and his cohorts go about it, the rest of us who weren’t born with gills are more often than not intrigued by the process. It encompasses the various stages of the human experience, beginning with a segment called ‘The Miracle of Birth,’ during which it is made quite clear that the film was made in a different time given its callous attitude towards women, and concluding with a section surprisingly entitled ‘Death.’

In the meantime, we pop in on a Yorkshire family who has been burdened by a surplus of children thanks to the Catholic church’s disapproval of the use of protection; visit a British public school where boys are taught the finer points of engaging in sexual intercourse (also rugby); get invited to possibly the most inappropriately-timed birthday celebration on a War World I battlefront; learn that one doesn’t have to be dead to be an organ donor; and sit down to dine with the world’s most obese man (shudder).

Given that this is the fifth and final feature film, it’s no secret that a certain level of tolerance for racy and downright offensive, crude humor is required to make it through these bonkers 107 minutes. As well, any hope for narrative cohesion should be all but quashed from the outset. Ideally The Meaning of Life isn’t anyone’s first experience with the gang; hopefully you’ve had some previous exposure, and have come to accept certain realities about Monty Python. One of those realities is that their style values quantity over quality in terms of how gags are delivered, and while some are painfully effective — Cleese’s public school sex ed course being arguably the highlight — other segments, such as The Meaning of Life Part IV (‘Middle Age’), where a middle-aged couple visit a Medieval dungeon-themed restaurant, and the latter half of Part VI (‘The Autumn Years’), a restaurant staffer’s attempt to offer his take on the meaning of life by taking us back to his childhood home register as awkward and unfunny. And then of course there’s the realization that some of the scenes are just plain weird, a la ‘Find the Fish.’

Yet the entire package ultimately works because of the troupe’s camaraderie. Cleese, Graham Chapman, Terry Gilliam, Eric Idle, Terry Jones and Michael Palin endlessly feed off of one another. Each have their time in the spotlight, no one seems selfish or egotistical enough to feature more prominently than another. Of course, that’s not the same as saying that all skits pay off equally, but if ever there were a group that epitomized comedic chemistry it would be this lot. The Meaning of Life might not be the most consistent production but it’s superior to the gross-out brand of comedy you’ll find in modern films. 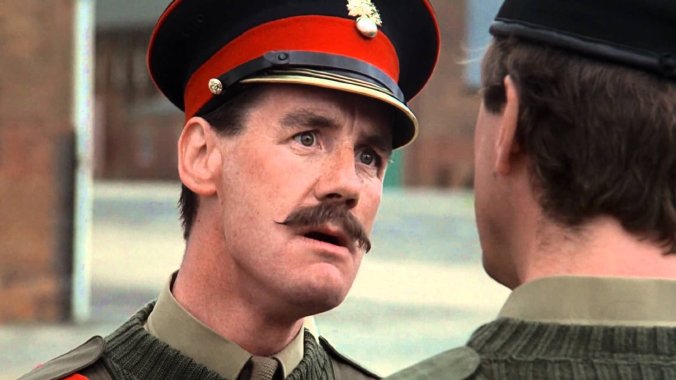 Recommendation: Monty Python is known as one of the most influential comedic groups of all time, their impact on the world of satirical/parodical film and stagecraft at large akin to what The Beatles did for music. If that’s not enough to recommend a watch, I don’t really know what is. But I suspect these kinds of films don’t really need much of an endorsement. You’ve either seen them or you’ve given them a wide berth.

TBTrivia: John Cleese has gone on the record as saying this film was “a bit of a cock-up,” and all the other Pythons agreed that this film is not of the same quality as their previous two (The Life of Brian and The Holy Grail).