In The Man From U.N.C.L.E., the stylish new action comedy from Guy Ritchie, Henry Cavill looks short compared to Armie Hammer. So I had to go look up the listed height of his less debonair co-star. Hammer stands a towering 6’5″. . . The size difference is notable, but more importantly it defines the film’s running sight gag — two larger-than-life men stumbling their way around a terror plot steeped in 1960s Cold War paranoia.

At the risk of re-opening fresh wounds, may I remind everyone that Cavill is no physical slouch. At 6’1″ he made for a pretty intimidating Kryptonian in the much-maligned Man of Steel (oooh, careful there, Tom), yet here he’s set up on more than one occasion as the submissive one, the American spy Napoleon Solo versus Hammer’s short-tempered Russian secret agent Illya Kuryakin. The two must join forces (but only after overcoming that awkward phase of being former sworn enemies on the streets of a Berlin torn literally . . . or, rather, politically . . . in half in the aftermath of World War II) to thwart the efforts of an international crime syndicate hell bent on global destruction, an organization led by the beautiful but dangerous Victoria Vinciguerra (Elizabeth Debicki).

Solo appears first. He briefly interrogates a young car mechanic named Gaby (Ex Machina‘s Alicia Vikander) who happens to be on the wrong side of the Berlin Wall. With her cooperation in providing some personal background (e.g. the nature of her father’s work) Solo assures her he can help her escape the Iron Curtain. An exciting chase throughout the ruins of the city ensues when the pair cross paths with Kuryakin, initiating one of several impressively choreographed stunt sequences that Ritchie has by now mastered. It isn’t as quickly paced or as vicious as those featuring in his signature early works. If anything, U.N.C.L.E.‘s suavity is antithetical of the behaviors of those brazen British blokes of the late ’90s and early 2000s. But don’t make the mistake of equating Ritchie’s tempered approach with a boring film.

In fact his style might never have been better. His ability to generate comedy out of the sheer physicality of his leads trumps the familiarity of the screenplay (written by Lionel Wigram and himself). Cavill and Hammer get along great but there’s something more striking than their chemistry, a chemistry that makes sequels seem all but inevitable. How ridiculous are these guys in the roles of secret operatives? Even with dark pasts, the likes of James Bond, Jason Bourne or even Big Chris don’t occupy the same kind of space. Hammer, who, once again, has four inches on Cavill’s imposing frame, takes on a character simmering with intensity and anger who must stuff his emotions down for the sake of the mission; Cavill, considerably more charming and well-adjusted, can still be a brute when push comes to shove. And yet, if Ritchie allowed the pair to play it straight the film would be bleaker and less enjoyable.

Ritchie also judges his female characters well, effectively emboldening any skeptical future director with the idea that it is, in fact, okay to cast curvaceous females in well-written, anti-damsel-in-distress roles. Vikander, though not quite as luminous as she was earlier this year as Ava, offers strong support in the form of a deceptively complex role, one that comes to bear the narrative’s crux — who exactly is an agent to trust in this time of turbulence and . . . erm, distrust? But it’s Debicki’s sinister Victoria, a descendant of tyrannical rule of some description, that is going to stand up to scrutiny. With what little screen time she is given Victoria is a true sadistic. A femme fatale if there ever was one. Of course, the film has a duty to provide more general entertainment so she’s not untouchable. Her demise is actually one of the movie’s missteps, but hey, now I’m just being picky.

Familiarity with the 1960s TV series isn’t a requisite, nor is experience with the director’s previous outings. Ritchie appeases with a Sherlock Holmes-esque touch — it isn’t probably what die hards are going to be looking for but even they are likely to come to accept this for what it is — and crafts a story that, while not wholly original, steadily absorbs through its key players’ charisma, slick cinematography and gorgeous production design. Expanding beautifully on the backs of a well-established core of enthusiastic performances, U.N.C.L.E. is as ridiculously enjoyable as it is ridiculous. 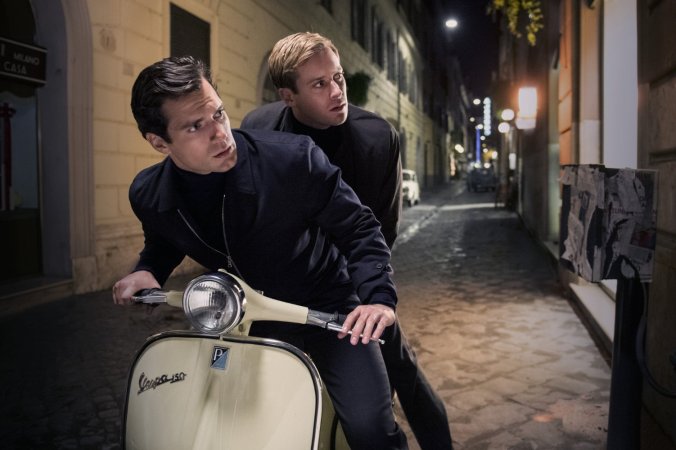 Recommendation: It’s not the most original story you’ll see this year but it’ll be a challenge to find a more enjoyable thrill ride, especially one dressed in the style of the 1960s. The Man from U.N.C.L.E. is one of Guy Ritchie’s best films, and if you call yourself a fan of his brand of filmmaking you owe it to yourself to go pick up a ticket for this right away.

Quoted: “I was briefed on your criminal career. Your balls are on the end of a very long leash, held by a very short man.”