Believe it or not, this ungainly film title actually leaves details out. So does the promotional poster.

Sure, a 100-year-old man does climb out a window. And (spoiler alert) he does disappear . . . well, relative to the perspective held by those we meet at the film’s open. Our geriatric protagonist is Allan Karlsson (Robert Gustafsson) and he appears very unhappy in his current state, confined to a tiny room typical of most retirement homes. It’s his birthday, but before the congregation of staff and fellow residents can send him their well-wishes he’s out the window and vanished. And so begins a desperate search that will entail local police and gang members.

The 100-Year-Old Man Who Climbed Out the Window and Disappeared develops mostly through flashbacks, and because it does the title succeeds in misrepresenting the significance of current events. Confusing isn’t the right word, but misleading seems a better fit. The story is far less concerned with the here-and-now as it is in delineating the old man’s life experience. We occasionally resurface in the present tense as Allan makes his way nonchalantly from point A to point B, from B to C and C to D. While each point bears little geographic significance they serve as opportunities for Allan to explain the events in his life that have come to define who he is. Surprisingly there’s much more to him other than his fascination with blowing up everyday objects.

Landmark moments — his castration at the hands of a cruel doctor; his role in J. Robert Oppenheimer (Philip Rosch)’s Manhattan Project and subsequent involvement in the Second Great War, where he befriends Albert Einstein’s “less intelligent twin brother,” Herbert, during his time spent in a Russian gulag; his greater rises to prominence thanks to his shoulder brushings with Vice President Harry Truman (Kerry Shale) — serve as the backbone of this bizarre tale. Played exclusively for laughs, they characterize the whimsical fabric of the narrative while suggesting how miraculous history can sometimes be. The movie never aspires to be profound; it’s far too clumsily comedic to actually be taken seriously, but on occasion it does inspire thoughtful reflection. Relative to Allan’s life, if he never developed an affection for blowing things up, would he necessarily have found himself in the positions he does later in life?

When not busying itself in the affairs of the past, The 100-Year-Old Man depicts an amusing cat-and-mouse game ongoing amongst Swedish police and thugs. The former attempts to link a bizarre murder/kidnapping to the 100-year-old man, while the latter is trying to recover some 50 million (Krona, I presume, even though the currency is never specifically mentioned) that Allan has taken via a comical mix-up at a train station early in the film. The result is a complicated and wildly unlikely misunderstanding leading to the involvement of a British brute (played by the one and only Alan Ford), that, strangely enough, is more satisfying than a good deal of the backstory presented.

Unfortunately the film’s structure loses its novelty fairly quickly. Running nearly two hours in length, the adventure overstays its welcome, dragging in more than one place and indulging in frivolity to the detriment of our diminishing goodwill. More often than not, though, The 100-Year-Old Man serves as delightful entertainment featuring an atypical protagonist. It’s historically inaccurate, harmless fun. 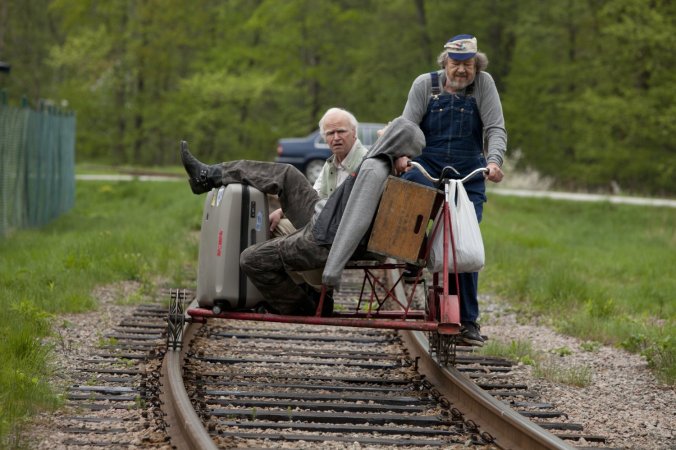 Recommendation: The third-highest grossing Swedish film of all time somehow found its way to Knoxville, Tennessee. If you can get your hands on this little ditty, I recommend you do so. It’s funny, heartwarming and bizarre in equal measure and while it won’t linger in the mind much longer than a couple of days I feel pretty comfortable saying it will be worth your while . . . for those who are fans of things that are just a little bit off of the beaten path, anyway.