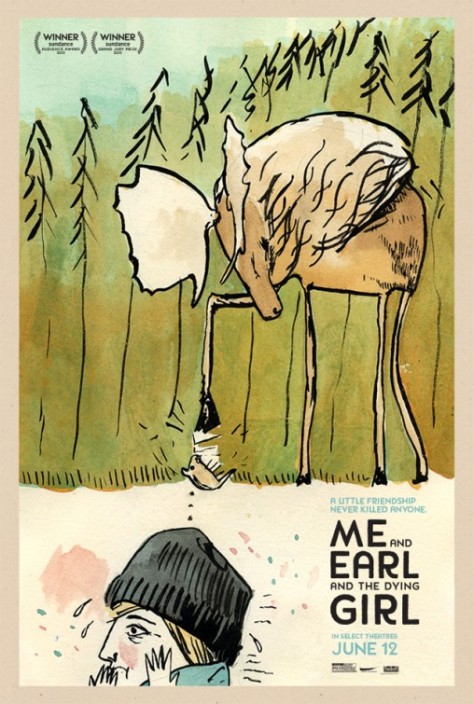 I’d like to dedicate this piece to my good friend Andy, a man of rare intelligence and passion for rock climbing that the Knoxville community and the world at large lost far too soon.

Me & Earl & the Dying Girl may be unafraid of confronting brutal realities but it has little interest in festering in sorrow and solemnity. In fact the blunt title is a strange acknowledgement that things are going to be okay. Much like Rachel’s frilly purple pillow it cushions us if even just slightly from the gut-punch we prepare ourselves for throughout this meditation on life’s transience.

Sure, there’s a sense of inevitability and dare I say it, predictability, that casts a pall over Greg (Thomas Mann), Earl (RJ Cyler) and Rachel, a.k.a. ‘the girl’ (Olivia Cooke) and the last few weeks of their high school lives but Alfonso Gomez-Rejon and his idiosyncratic crew would be damned if the weight of the material is going to get the better of them. In spite of its originality — first and foremost in the form of a knock-out performance from Mann, whose previous work didn’t exactly instill confidence in his acting prowess — I hesitate to say my relationship with Earl is one of complete, albeit beautiful, cliché. Rarely have I been so impressed with the value a movie places not only on youth but on life itself. To say I emerged from the theater with my outlook even remotely altered would be the cherry on top of that cliché sundae but hey, can I just say it anyway?

The Part Where I Tell You About The Plot.

Greg’s informed by his overbearing mother (Connie Britton) that a school friend — Greg insists she’s just an acquaintance — has been diagnosed with leukemia. His father (a very hippie Nick Offerman), reiterating that the situation “sucks quite a bit,” shares mom’s concern that Greg ought to befriend Rachel during this difficult time. Greg knows Rachel would see through the idea, but goes anyway. And lo and behold she sees right through the idea; she doesn’t need anyone’s pity. Over time, however, Rachel becomes drawn to Greg’s peculiar sense of humor and aggressively self-effacing nature, though he hesitates to place the ‘friendship’ label on any relationships he shares with his peers. Especially with Earl, a longtime “co-worker” with whom he eats lunch daily in Mr. McCarthy (Jon Bernthal)’s office . . . because of air conditioning and fears of getting caught up in any sort of clique constituting the chaos that defines Schenley High’s cafeteria.

Aside from social awkwardness, the pair share a passion for spoofing canonical films. One day class hottie Madison (Katherine C. Hughes) gets wind of this and asks them if they would make a film dedicated to Rachel. Given that their previous efforts are of a rather immature and bizarre nature — avant garde wouldn’t be the worst way to describe them — Greg is primarily concerned with coming up with something that would feel appropriate. When Earl tells Rachel about the idea to make this film, we witness the fall-out: Greg’s self-conscientiousness and Earl’s open honesty clashing with brutal force, with little thought given to how shallow and pointless the conflict really is.

Unfortunately it gives way to a larger rift between Greg and Rachel, the latter who is trying her hardest to deal with the reality of not knowing what the next day brings. All those weeks giving way to months of shared time in her bedroom, a room occupied by a diverse collection of pillows only an indie film could get away with drawing attention to on more than one occasion. Has all this time meant nothing? Was it just Greg’s parents ordering him to be there the reason he kept returning? Greg describes the friendship as doomed, but we’re not exactly sure how serious he is about that sentiment.

The Part Where I Act Like I Know How to Critique a Film.

Pervading Earl is a refreshing directness — from the performances to the tight framing of this hectic school environment and the surrounding neighborhood; from physical execution to the various thematic threads, nearly every aspect of the production lives and dies by its willingness to be casually confronting. It’s a film that allows a conversation about death and the fleetingness of existence to come about organically, although there are of course meanderings into subplots involving popsicles, “accidental” drug-taking, and peculiar food only Nick Offerman would be into for real.

As Rachel, Olivia Cooke exudes braveness and it’s a quality that clearly rubs off on her young co-stars. The distinction of most memorable performance may go to Mann but Cooke is damn good. Parenting as a function of the way we grow and experience is wisely given a substantive role as well. Molly Shannon as Rachel’s mother is unhinged but empathetic. She may be a little off her rocker and too often a poor role model for these kids but she’s a single parent desperately trying to deal with her daughter’s illness. Similarly, Greg’s parents are borderline obnoxious but they explain a great deal about Greg’s off-kilter personality. Matured and young adult alike aren’t alienated by unrealistic writing; they’re imperfect, sometimes off-putting but more often than not relatable.

Based on Jesse Andrews’ debut novel of the same name, Earl shares more in common with the ‘me’ in its title: like Greg, the narrative is equal parts profound and humble. Drama doesn’t draw attention to itself until a final tear-jerking sequence of events that simultaneously surprise and confirm early suspicions. The narrative is straightforward but as anyone who has navigated the halls of high school will attest, that journey is anything but. When you factor in a life-altering experience such as the one facing Rachel and those that she’s involuntarily surrounded by, all bets are off on how anyone is going to fare come the end of the storm. Speaking for myself, this isn’t life-changing stuff but it is life-affirming. This is surprisingly uplifting for a film with ‘dying’ as part of the title. 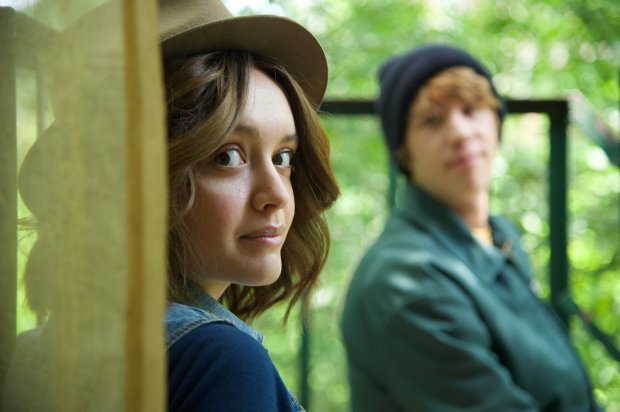 Recommendation: Gomez-Rejon’s sophomore effort proves an emotional experience, a beautiful representation of a difficult high school experience. It’s a great companion piece to 2012’s The Perks of Being a Wallflower. Simmering with brutal honesty and endearing personalities, Earl isn’t always fun and games but as a big fan of films that refuse to sugarcoat its themes, I find it’s an easy one to embrace. And anyone who can appreciate really off-beat characters are sure to find plenty to sink their teeth into here.