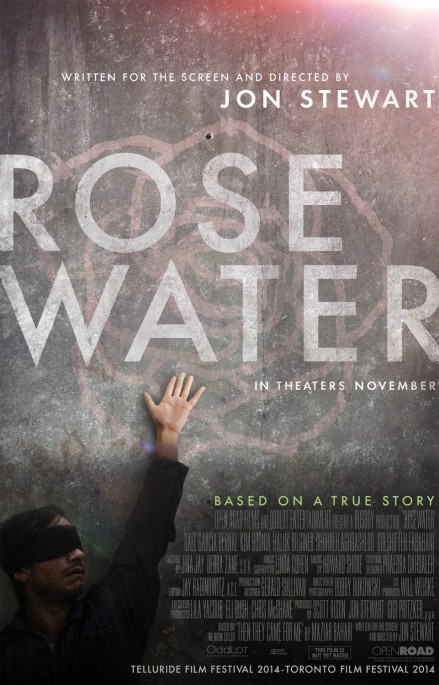 Rosewater may be watered-down in the drama department, but then that’s missing the point that Jon Stewart already seems to be blossoming from satirical news show host into a feature film maker with serious potential.

You won’t find many (if any) of Stewart’s signature snide remarks in this cinematic adaptation of Iranian-Canadian journalist Maziar Bahari’s memoir Then They Came for Me. Distilling the essence of that account into a rather harrowing hour and forty minutes couldn’t have been any small task, yet Stewart adapts with confidence Bahari’s being detained and brutal interrogation at the hands of Iranian authorities for 118 days — a kind of confidence that seems a natural extension of his ability to look a camera dead-on and resist the urge to crack wise whenever it was appropriate.

This somber account isn’t in the conversation of award-winning biopics, but Stewart’s dedication to exploring a serious, often potent subject matter is impressive regardless. Rosewater is earnest yet it never becomes powerful enough to arouse emotional responses; lenses dedicated to reflecting the tension that continues to define American and Middle Eastern relations have a more journalistic presence rather than anything that feels truly cinematic. But perhaps it’s a credit to the filmmakers that the final product never could be described as bombastic or self-serving.

Performances from Gael García Bernal and Kim Bodnia enrich the film with paranoia and distrust but it’s really how Stewart puts together an empathetic portrait of human beings being lodged in between a rock and a hard place. Bodnia’s Javadi (a.k.a. Rosewater), though clearly an unlikable and hostile man, is shaded with a humanity that saves him from one-note villainy. We witness the perpetual berating and detaining of the journalist as a function of Javadi taking orders from his higher ups. We notice these 118 days take a toll on him, though nothing like what they do to his prisoner. And clearly there are fundamental ideological differences that assure neither party are ever going to see eye-to-eye, but during the course of Rosewater‘s extensive imprisonment scenes we glimpse at a more disturbing reality: there’s an unsettling sameness about the extremist beliefs of Javadi and Maziar’s commitment to maintaining his innocence.

In one stand-out scene toward the end, far past the point where the blindfold Maziar must wear at all times signifies little more than an asinine Evin Prison regulation, Stewart beautifully displays how one triumphs over the other, and though it’s no spoiler to suggest which one does win out, the denouement finds The Daily Show host announcing that he has plans beyond sitting behind that desk, reading and analyzing ridiculous headlines. This is the film at its most optimistic and moving.

Rosewater doesn’t try to be a damning political statement. It’s about a man’s journey through psychological (and often physical) abuse and torment. For us, the torment is knowing how close Maziar is to freedom. His words carry truth but they aren’t worth listening to as far as Javadi and his higher-ups are concerned. To them, the journalist’s so-called treasonous acts speak for themselves. To them he’s a symbol of an uprising those in power couldn’t hope to suppress if enough of them spread across the land. The documentation of the violent reactions of citizens following the presidential election of 2009 isn’t an innocent act; it could galvanize the oppressed into action against a righteous government. Such ignorance is the hardest pill to swallow.

Rosewater reflects honestly upon a crisis situation that hardly feels sensationalized. Stewart demonstrates a knack for showing compassion towards his fellow man, even the ones we ought to loathe completely. Of course he’s never telling us to root for the bad guys, and he’s not exactly deterring anyone from celebrating the good ones outright. In his debut film Stewart is reminding us that every common human experience is tinted by some shade of gray. Some grays are certainly darker than others. 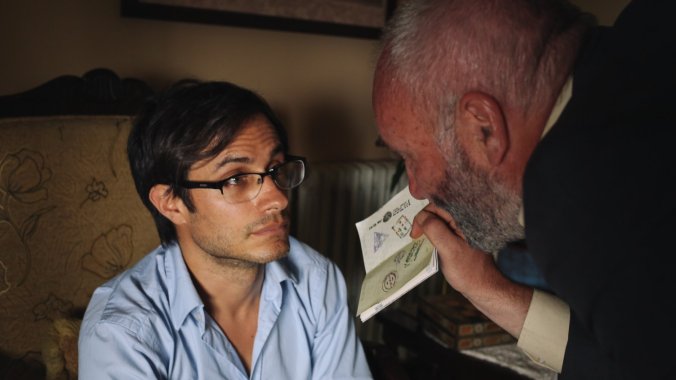 Recommendation: Jon Stewart has created a bit of cinema that has potential to be more powerful, but there are marks of a new talent present all throughout. Rosewater is politically-charged, but its surprisingly restrained in that regard and more often than not doesn’t lean too heavily one way or another. It’s a film worth checking out for anyone curious to take a glimpse at Stewart’s possible post-Daily Show career.

Quoted: “There are certain situations, that if you film them, won’t do your friends or the movement any good.”