Well here we are with a second edition of the John C. Reilly Factor — Thomas J’s latest character study. Find more like them here and here. Or just peruse the Features menu up top.

Last month we were talking about this and so now I’d like to switch out of that melodrama and move on to . . . well, I guess more melodrama. Melodrama upon the high seas. As always, spoilers ahoy! 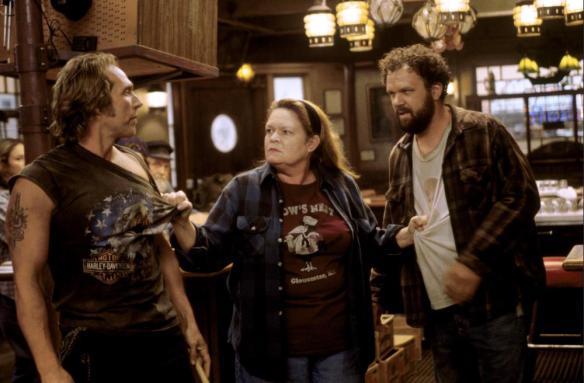 Character Profile: Good old ‘Murph’ is a fisherman with a strong work ethic, often spending long, long days on the open waters trying to bring home that “pay dirt.” He’s struggling to make ends meet, not unlike many a Gloucesterman, on the cusp of divorce while still trying to be around as much as possible for his son. Murph is headstrong and has a hard time adjusting when the crew of the Andrea Gail take on an extra hand, David ‘Sully’ Sullivan — a welder with a rather stand-offish personality and determination to do things his own way.

If you lose JCR, the film loses: firstly the tension between two of the Gail’s more interesting personalities — one brimming between Reilly’s Murph and William Fichtner’s Sully. These two men are at each other’s throats from the get-go and though the clashing doesn’t particularly boil down to much beyond your typical alpha-male antagonism, John C. Reilly makes his character so very believable. It wouldn’t be the same if another actor stepped into this predicament. Besides, the loss of the entire crew is made that much more painful once we’ve established Murph is very much a man trying to make good on his promises to his family back on shore. Reilly sells the tragedy with a soul-bruising sense of empathy for what the real life Murph might have felt in his last moments.