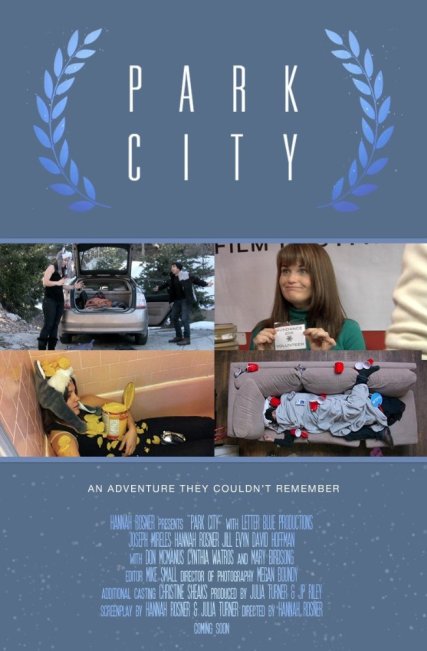 Undoubtedly best viewed through the eyes of a filmmaker, Hannah Rosner’s mockumentary offers up a fairly fun adventure for those curious about behind-the-scenes action in the life of an aspiring indie film crew.

Crammed into a Prius with her co-stars and camera equipment (iPhone(s), perhaps?) Rosner makes the most of a literal low overhead by intercutting footage of the adventure with interviews with the crew as they describe the experience before, during and after. The crux of Park City arrives when, after a successful evening of “mingling” with some of the movers and shakers and partying down with the more accessible crowd (that was more the successful part), Hannah and Joey are rudely awakened by the discovery that their only copy of Hearts and Cash has disappeared.

With mere hours before their screening, they attempt to rationalize last night’s events and possibly track down the film reel. Naturally there are obvious suspects in fellow filmmakers, and Jill’s self-centeredness makes her a candidate as well. Meanwhile, Dave’s eyes have glazed over in the fog of marijuana and he doesn’t seem to be bothered by the developments. With frustration mounting and time running out, will the team’s first attempt at getting exposure end up blowing up in their face? Is a generally bad experience ultimately still good experience?

In posing these questions this low-key, relatively amateurish misadventure doesn’t aspire to reinventing the reel. It aims for crowd-pleasing, if not the general public then a specific group of like-minded individuals. Then again, and in spite of an ostensibly exclusive subject and a starlet who seems intent on portraying performers in an unflattering light (Evyn ironically might be the best actor on display as she is good at getting on your nerves), Rosner is knowingly winking at anyone who has taken those first, scary steps in pursuing a life goal. Okay, so perhaps this generalization overloads the film’s quota of cliché, but I’d like to think Rosner’s work isn’t as pretentious as some are likely to write it off as.

While it’s difficult to overlook the shaky acting and occasional technical difficulties — audio seems to be spotty in places and it’s more than likely this film was shot using an iPhone — Park City is an experience worth soaking up.

Recommendation: Park City might be aimed more for those plugged into the industry but there’s enough here to recommend to anyone with a general interest in film and the filmmaking process. The mockumentary has its moments of weakness (what film doesn’t?) but Rosner manages to overcome many of them by offering fun and interesting twists along the way. Think The Hangover on a much more modest budget, and with less set destruction, less vulgarity and definitely less Mike Tyson.