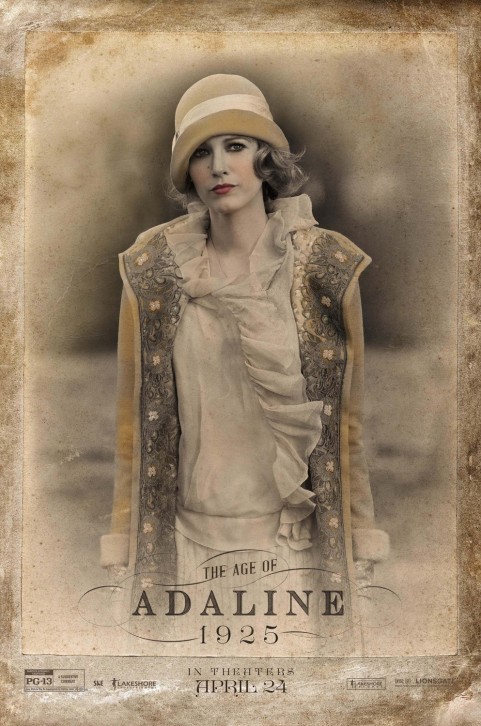 I’m a sucker for romance done right. Call me old-fashioned, laugh at my sentimentality, but The Age of Adaline fits the description, bookmarking itself as one of the first true surprises of the year.

At first glance Lee Toland Krieger’s premise promises not much beyond a good-looking actress adorned by a thick coat of hokum. Adaline Bowman (Blake Lively), who survives a most unusual car accident and is rendered unable to age beyond 29 — because, lightning and ice cold water and stuff — discovers that perpetual youth is indeed a curse. Doomed to look beautiful for the rest of her days (woe as her), there actually are practical considerations, and thanks to solid writing and terrific performances, such complications garner our sympathy.

Not only will Adaline be unable to maintain a relationship with anyone as no one is likely to share her gift of presumed immortality, but she fears that her condition will make her a target of scientific experiments. It’s a fear that’s not unfounded as one evening she is forced into a car by FBI agents that she manages to escape from quickly. From here on out she vows to take her life on the road, avoiding commitment to others and even her own identify for longer than a decade. Oh, ageless Adaline, I feel like there ought to be a song dedicated to your predicament.

Or at least your wardrobe.

A valid argument could be made in dismissing all of this as an excuse to dress up the star in a variety of get-ups dating back to the early days of the 20th Century. Seriously, the woman evolves from flapper fashionista to ’50s bombshell, perpetually enticing the camera to her stunning natural beauty revitalized by costume designer Angus Strathie’s exquisite sense of style and time. Vanity would be a legitimate complaint if this were all Krieger et al cared about, but glamour belies their calculated, collective effort.

At the heart of the film is a sublime performance from Lively who effortlessly exudes charm and loneliness. Her ability to transcend time may be due in part to the work done behind the curtains but she is equally responsible for convincing us Adaline is a woman shackled by circumstances rather than liberated by them. When she meets a dapper gentleman named Ellis Jones (Michael Huisman) at a New Year’s party Adaline rejects his many advances with a nonchalance only a woman on her way to gaining 107 years’ worth of life experience can afford. It’s one in a series of moments where Lively’s having fun with the role is palpable.

Heisman introduces a vulnerability to a story that perhaps doesn’t need any more. And despite herself, Adaline can’t help but be drawn to his genuineness. There is of course an air of predictability and sentimentality to the developments but that doesn’t detract from the overriding sense of relief we feel. Added to the supporting cast we are treated to another limited albeit touching Ellen Burstyn performance as Adaline’s daughter; Harrison Ford chimes in with a pivotal role late in the third act, giving The Age of Adaline a needed dose of gravitas. In a period where the film was starting to run out of steam, the unification feels less natural as it does necessary, but even still the moment serves as a testament to how deeply empathetic this cast, these characters are.

At the risk of sensationalizing my experience, The Age of Adaline compares favorably to the likes of David Fincher’s The Curious Case of Benjamin Button. In that way, both films absorb through the virtue of their length, more so the latter than the former; disarming in their lead performances (though, again, Brad Pitt perhaps being more the heartbreaker not just because of his looks); both films transporting audiences to times we can now only visit in cinema or for some in their memories. The Age of Adaline won’t be an Oscar contender for much outside its costume design and if it’s lucky a nod to production design, but that’s no small feat for a film hailing from a genre that time and again fails to produce something as rich and rewarding as Krieger’s multiple-period piece.

Recommendation: Blake Lively turns in her best work to date in the titular role of Adaline Bowman. This is a character and a performer who is difficult not to like, even despite Lively’s past role choices being. . .eh. . .less than stellar. In fact the only thing I can personally recall enjoying her in was 2006’s Accepted. That’s a film far removed from this in terms of enjoyment and maturity. It’s nice to see her rise to the occasion. And as far as romantic dramas go, you can do so much worse than the admittedly schmaltzy and scientifically questionable The Age of Adaline. A very nice surprise.