What with their pawing and purring and hairballs and general infatuation with chasing their own tails. Is evil the right word? In this case, yes . . . yes it is; cats take on an entirely darker role in at least one human’s life.

At the center of attention in this bizarre twist on an already twisted subgenre of horror known as horror-comedy is a fairly lonely man named Jerry (Ryan Reynolds), who has just started working at a bathtub factory in a rinky-dink town we don’t know the name of. By all accounts a nice enough guy, he nevertheless shows some signs of detachment from reality and reluctance to interact with his coworkers. When he’s tasked with putting together a company barbecue and in the process meets the cute girl from accounting, a British babe named Fiona (Gemma Arterton), he is instantly smitten and asks her out.

Unable to flat-out tell him she doesn’t want to go out with him, she instead avoids him after work and goes with her friends from accounting, Lisa (Anna Kendrick) and Alison (Ella Smith), to a karaoke bar. She’s left stranded afterwards in the rain when her car can’t start up and her phone has been soaked in the downpour. Serendipitously enough, along comes Jerry who’s heartbroken to say the least having been stood up yet offers a desperate Fiona a ride home. In striking up a conversation with her on the way back Jerry can’t see the deer in the middle of the road and unfortunately creams it. Antlers and all sticking through the windshield, we’re now entering spoiler territory. Suffice it to say, The Voices quickly flips the switch and starts to pursue, with unsettling fervor, the horror aspect.

As far as the comedy is concerned, a little asterisk might need to be placed beside that word. A twisted sense of humor will help enormously in enjoying what Iranian director Marjane Satrapi has to offer here; although the brightly-colored promotional poster for the film doesn’t really make that a secret. What might be more of a surprise is the quality of Ryan Reynolds’ purely tortured performance. He is something to behold — the days of Van Wilder are long since gone, boys and girls. Not that staying in school for the better part of a decade was ever a bad idea but this is a role that represents a remarkable sense of maturity.

If Reynolds’ masterful turn as an oddly empathetic Jerry is the peanut butter to this messed-up sandwich the jelly, then, surely is Satrapi’s commentary on the truly disturbing potential of mental illness to completely consume its victim. There’s no doubt something’s off about this man and while we do surpass the point where we in any reality could forgive him for what he does (let’s get one thing straight: this isn’t an Eli Roth production, death is not played up for laughs), we are able to get to a place where we understand where his problems stem from.

Sure, in order to get to the root of the evil that pervades Jerry’s life we must buy into some rather ridiculous scenes that could have benefitted from stronger writing, but the surrealism, the downright perverse entertainment value wins out time and again. Talking dogs and cats? This isn’t quite like Homeward Bound. Or maybe, if Sassy had more of a psychotic agenda.

At the end of the film, one thing was certain for this reviewer: I’m still much more of a dog person. 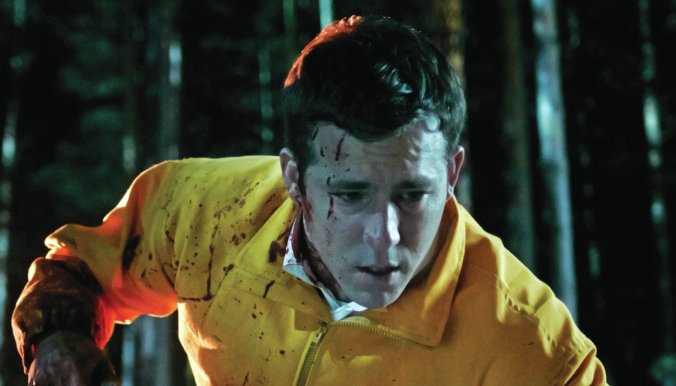 Recommendation: The best recommendation I can give here is that if you’re still wondering what the animals have to do with anything (especially that darn cat — yay, another movie reference!) then you should just watch and find out for yourself. Fan of Ryan Reynolds and black comedies? This just may well be a must-see for you.

40 thoughts on “The Voices”