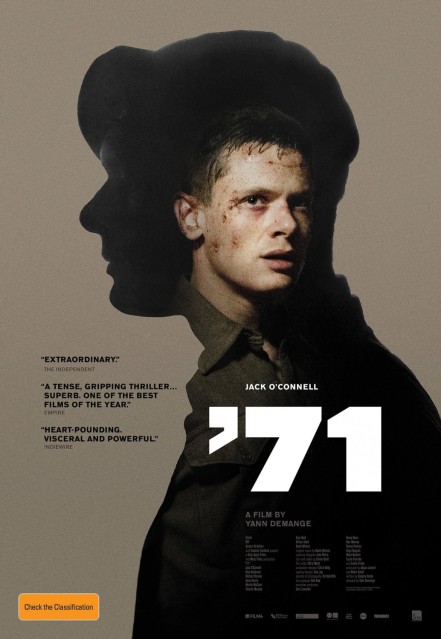 The price to pay for sitting through a film fixating on the tensions peaking between Catholic Nationalists and Protestant Loyalists in Belfast, Northern Ireland in 1971 may very well be sacrificing a good night’s sleep.

Titling the experience ’71, Parisian-born Yann Demange strips away pomp and circumstance, electing to pursue a simpler approach to capturing a period in British and Irish history that will at once thrill and disturb willing onlookers. Suffice it to say his film is not for the faint of heart, and it is not for the average thrill seeker. Few films in the last several years have produced tension so unbearable that breathing must be constantly kept in check.

I find it sort of appropriate to become a little over-excited when talking about a story that so effectively hones its power by depicting wartime atrocity by establishing how so many individuals can become warped by ideological differences. ’71 remains neutral in its depiction of a young British soldier named Gary Hook (Jack O’Connell) who one afternoon is fortuitously separated from his company when a riot breaks out in the streets of war-torn Belfast and is forced to fend for himself when pursued by a group of young Nationalists down back alleys and through hostile apartment complexes.

My comment about neutrality shouldn’t be misconstrued as a director afraid to show bias one way or another, nor should it be extrapolated to the film as a whole as a thematic concept. In fact, ’71‘s greatest strength — one of them, anyway — is defining the realities by which Hook is unwittingly psychologically raped time and again. Everyone has an agenda, a purpose for their actions (or non-actions); to some degree every major player is justified in what they are doing to another. And the young soldier, hailing from Derbyshire, has only one interest: staying alive so he might get back to his barracks. Siding with one group or another is something he can ill afford while being hunted.

The ostensible good guys — that is, the British Army — are concerned with Hook insofar as his disappearance poses a threat to their assistance with the Royal Ulster Constabulary and its efforts to stamp out pockets of heavy resistance in hostile communities like Belfast. Indeed, when a near-fatally-wounded Hook manages to survive a bomb explosion just outside a pub, a stronghold for one of several Loyalist factions, he’s reminded by his miraculous savior — a former Army medic named Eamon (Richard Dormer) — that to the government, Gary is but a piece of meat. To consider his plight hopeless on the grounds that he is now physically weaker is to sidestep the small issue that several Nationalist extremists, led by the ruthless, influential James Quinn (Killian Scott) have been enraged by the fact they had a chance to kill him point-blank during the earlier riot but failed to do so.

Nevermind the fact that Hook’s disorientation deep within enemy territory impairs his ability to trust any shadowy figure he encounters at each street corner, in each room he lands in through happenstance or sheer will. The majority of ’71 takes place over the course of a single night on the streets of a place not dissimilar from what Hell may look like; the ghoulish characters interpreted by Irish and British actors haunt with human skin concealing something decidedly less human. Conflicting interests both confound and dismay those who aren’t shielding their eyes from the grotesque bodily injury and breakdown of civil order. ’71 is a terribly violent film, but in that way it’s unforgettable. Cinematography, brooding and menacing in the hands of Tat Radcliffe, contributes mightily to a growing sense of unease. And the acting, particularly from O’Connell, speaks for itself.

This period into which we are thrust alongside Gary Hook are known as the early years of ‘The Troubles,’ a period that endures for nearly 30 years, beginning in 1969. What this young man goes through is certainly harrowing but ’71 suggests something even more troubling: this story is ultimately microcosmic. How many others, soldiers or otherwise, disappeared without a trace, were betrayed by their own and left to fend for themselves but didn’t have quite the same ending Hook’s story has? And we’re still talking about one nation here; a single conflict.

Although Demange doesn’t profess anything radical about how governments react to crises and how it treats those who go to fight for it in times of great need, he doesn’t need to. Simplistic in narrative structure but emotionally complex as any war film that has ever been created, ’71 is brutal, handsomely crafted and potently acted. It will be one of the best films of the year.

Recommendation: I’d have to dig deep to find the strength to sit through ’71 a second time but if you haven’t seen it and find war films an important staple of cinema as I do, you owe it to yourself to see this — in theaters. I haven’t been this uncomfortable in my chair in some time, a testament to the level of acting, directing and cinematography that work towards this goal of accurately recreating a troubled time in the history of this particular region of the world. Highly recommended.