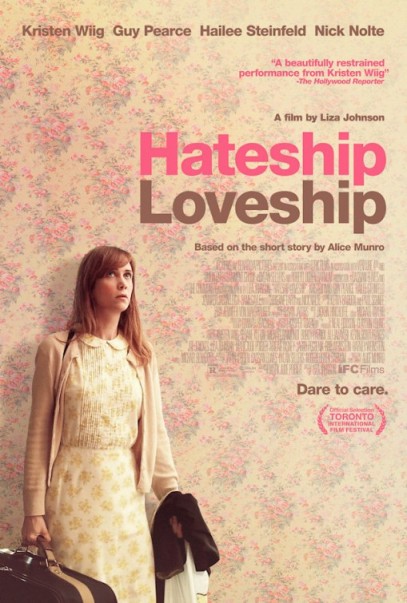 At a certain point, restrained filmmaking can put a strain on its relationship with its audience. Liza Johnson’s thoughtful but underwhelming Hateship Loveship is a film that dares to be subtle, so much so that it has trouble balancing its thematic and entertainment responsibilities.

Despite the oddball title Johnson manages to skirt around pretentiousness but the end result might be something worse: Hateship Loveship is a boring outing. This despite arguably its star, the versatile Kristen Wiig’s finest performance to date. This despite a grab-bag of reliable performers playing second fiddle to Wiig’s painfully awkward Johanna Parry. Indeed there are many things to like about the picture and the characters are up there with the most memorable of all the elements, but they are stranded in a story that focuses too heavily on the mundanities of existence.

Live-in-maid Johanna has known no other life than cleaning houses and taking care of her clients, the most recent of which has just passed away in their own bed, causing Johanna to move out. She lands a job tidying up Mr. McCauley (Nick Nolte)’s lavish home and taking care of his granddaughter Sabitha (Hailee Steinfeld), daughter of alcoholic and absentee father Ken (Guy Pearce). Sabitha has a very bitchy friend whose uncanny resemblance to Justin Bieber may not be intentional but the convincingly spiteful performance by young actress Sami Gayle is. Moving on . . . Sabitha and Edith take an instant dislike to the quiet and uncomfortable new maid and when they learn of her receiving of a letter from Ken welcoming her to the job and giving her confidence they both use it as an opportunity to trick her into thinking he is romantically interested.

Through a series of well-written emails the pair of teens in effect cause Johanna to drop everything at the McCauley residence and make a hasty trip to Chicago, in search of Ken and a possible new start. When he is taken aback by her sudden appearance in his cluttered room within a ramshackle motel he owns (interestingly enough, this is the same motel/location used in Dallas Buyers Club) Johanna is — well, it’s pretty obvious what emotions she experiences. Er, no. Actually it isn’t. It ought to be, but the direction is understated to the point of being nonexistent. Wiig’s in a perpetual state of detachment so when this big moment happens the emotional fall-out barely registers as disappointment when it should be an all-out, visceral collapse into permanent introversion. The circumstances are ripe for heartbreak, but the moment passes rather quickly.

Of course, the film isn’t over. Hateship Loveship presents a relationship born out of uncertainty and despair. Okay, so it’s not exactly original storytelling but we needn’t ask for much here. We can get by on the rough charm of Pearce’s broken Ken and the profundity of Johanna’s social anxiety. They are quite obviously meant for one another the moment she begins scrubbing his hardwood floor with the determination to overcome her most recent betrayal while Ken stares blankly at her, a cigarette glued to his lips. Sadly there are no developments thereafter that spin the genre or can pick the audience up from what has become a collective, steady slump into their seats. The pacing is languid, the conversations rendered uninteresting by predictable human behavior; the drama is not to be found in a film described as part drama-part comedy.

And where, pray, is the comedic element? Barring a moment where Wiig slinks her way out of a door and mutters a “thank you” when Sabitha compliments her on her shoes, there is little of Wiig’s comedic self to be found. But that’s less important as she’s running a clinic on how to transform one’s self into a dramatic role. If there are meant to be bits of humor elsewhere they are overwhelmed (or underserved, depending on how you want to look at it) by the sobriety of this woman’s slow journey through time. Frankly her situation is anything but funny if you were to ask me . . . but I don’t think anyone is so let’s, again, move on.

Johnson’s movie is an adaptation of Alice Munro’s Hateship, Friendship, Courtship, Loveship, Marriage, the title story in a collection of short stories. Though rich in characterization, the slow pace and ultimate inconsequence of virtually every plot strand leaves very much to be desired. Hateship Loveship frustrates and defies expectations in the worst ways in its plainness. Perhaps it does have a higher purpose elsewhere, and that is left on paper.

Recommendation: So frustratingly, Kristen Wiig is a marvel as a detached and lonely woman who comes into her own when she meets a kind but equally emotionally fragile man. Guy Pearce and Nick Nolte turn in warm performances as well but they too are done a disservice with predictable character arcs. Characters are what make this somewhat watchable but the story is something of a slog and that is almost enough for me to recommend you save yourself from this one. . .