Emotionally resonant, impressively acted and frenetically paced to a fault, the latest demonstration of Neeson’s physical and intellectual stamina may suffer from a case of ‘been there, done that’ but that’s more in reference to the general direction this new release takes and less to its personality. There’s no shame in repeating a formula . . . if it works. What’s that adage — if it ain’t broke, don’t fix it? Well Liam isn’t broken yet as this film proves; he’s got plenty left in the tank.

The 62-year-old Irishman crawls under the skin of what may be his most apparent antihero yet, Jimmy Conlon, a former hit-man with more ties to the mob than to his own family. When a thug, the son of one of Jimmy’s only remaining friends Shawn Maguire (Ed Harris) makes a sloppy attempt at disposing of unwanted evidence in the wake of a botched murder by tracking down an escaped ‘victim’ to Jimmy’s son’s home and attempts to clean house, Jimmy is awoken from a particularly brutal drunken stupor in an effort to save his son’s life. Michael (Joel Kinnaman, finally coming to life) hasn’t seen his father in five years since the death of his mother and finds the timing a little odd to say the least. Knowing full well what the consequences of his latest kill are going to be, Jimmy makes a strong case for Michael to trust his trigger-finger and gut instinct for just one night.

It’s clear we won’t be dropping the baggage of old age manifesting in bottomless drinks and endless cigarettes this time around: Neeson’s character once more gets to tout his miserable existence on this mortal coil as experience no one around him ought to share in, but within this fragile father-son dynamic the pain caused by his rejection from society — or those who haven’t committed murder for a living anyway — not only registers with the audience but it’s a burden that feels earned. If it’s not a better life Jimmy wants for his son and his family, which includes a regrettably disposable Genesis Rodriguez as his gorgeous wife, then it’s certainly anything but what the next 24 hours are going to offer.

As for those aforementioned consequences, Harris’ ruthless Shawn, whose previous claims of running a legit operation these days belie the monster dormant behind cold, blue eyes, stabs a man in the back no less than ten times with a large blade during a shocking sequence of mafia-related retribution. It’s not quite like Matthew 5:38 (“an eye for an eye, a tooth for a tooth”), but the allegory, even if as subtle as a backstabbing, works to heighten the tension. Every move Jimmy makes to protect his son Shawn mimics out of desperation — desperation with which we can actually empathize. Credit Harris’ gift for powerful acting. Credit screenwriter Brad Ingelsby for setting up the stakes sufficiently, as the fall-out between the two men culminates in a surprisingly emotional showdown.

Run All Night is of course not without its own missteps. Its many action-packed (read: very violent) scenes are spliced together with an energy that takes some effort keeping up with, even for director Jaume Collet-Serra. A dizzying blend of awkward camera zooms that whisk us from one section of the metropolitan maze that is Manhattan to the other and close-ups of characters at rest nearly results in nausea and does result in frequent detachment from the movie. Not to mention this story, though much more attentive to character development and emotional gravitas than the latter Taken installments, merely adds padding to Neeson’s post-Ra’s Al Ghul résumé. Run All Night is neither as poorly titled as Non-Stop nor as ill-advised as extending the legacy of Bryan Mills, yet it won’t survive the year in most moviegoer’s memory.

That doesn’t mean this isn’t a film worth checking out though. It packs a punch and has strong performances peppered throughout, unsurprisingly from its head honchos and even Joel Kinnaman. Yes, I do realize how much that sounds like hyperbole . . . but for once on this blog I feel like I’m underselling something. 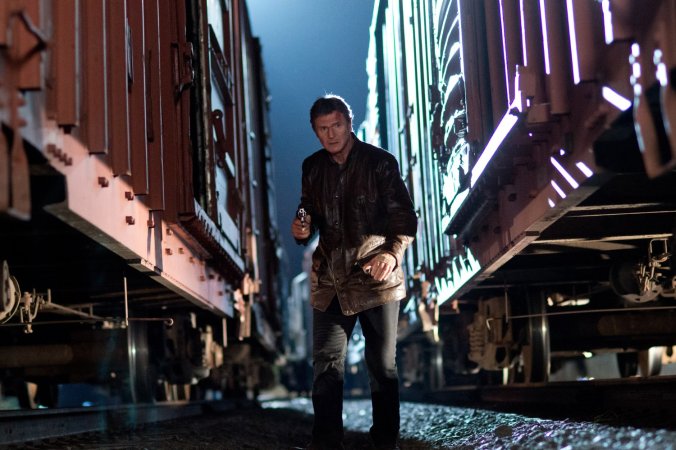 Recommendation: Run All Night could have gone either way, but Neeson once again delivers, with dramatic heft and some interesting relationship developments backing him up. At his age this could easily have been Walk All Night, or Hobble All Night. Or Talk on the Phone Menacingly All Night. But this character feels a little more three-dimensional as does the narrative. May I suggest this one to the more devoted fans of the rugged and imposing Liam Neeson and some other big-named actors who offer solid work.

21 thoughts on “Run All Night”