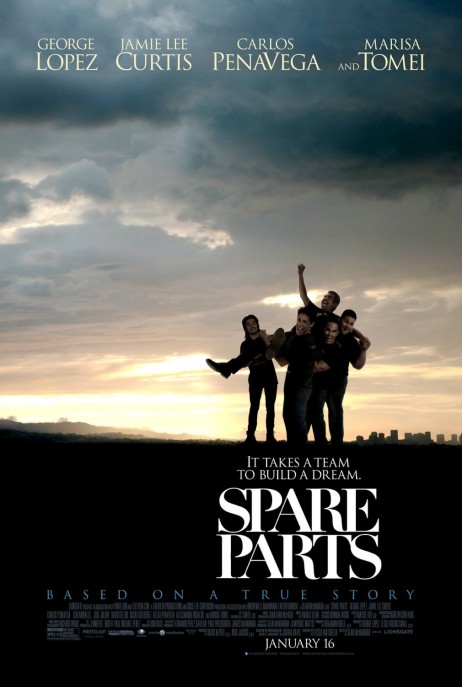 Lopez plays Fredi Cameron, a substitute teacher whose inexperience with the troubled Carl Hayden Community High student body is predicted to eventually overwhelm him. A grilling interview with the principal (Jamie Lee Curtis) suggests he should take his engineering mind elsewhere. His character is actually an amalgamation of real-life instructors Fredi “Ledge” Lajvardi and Allen Cameron and is a personality that meshes well with Lopez’s kind eyes and warm smile.

Mr. Cameron decides to tough it out and soon discovers a group of students with some unique talent, the likes of which are doomed to be overlooked in favor of the statistical probability their undocumented status in the States will lead them down a dead-end road. There’s Oscar (Carlos PenaVega), a senior with aspirations of joining the Armed Forces after school and whose confidence masks his deep-seated fear of being deported; Lorenzo (José Julián), a 16-year-old with a penchant for getting into trouble on the streets but more importantly a mind for building and designing things; Cristian (David Del Rio), a genuinely good kid whose youth belies one of the sharpest minds in the community, possibly in the greater Phoenix area and whose home life has him living in a small shed off to the side of the house; and Luis (Oscar Gutierrez), a quiet and unconfident young man undoubtedly conscientious of his physical size and self-assessed lack of practical skills.

The foursome rally around an extremely amiable Lopez even as he’s somewhat reluctant to invest his own time in the school’s robotics club. He sees the kids desperately need some direction, but it’s not until he’s finally won the support of a cute colleague (Marisa Tomei), who believes the students don’t need any more misleading, that Mr. Cameron realizes his passion for engineering can actually marry with his desire to help others. The robotics club sets their sights on the underwater robotics competition hosted at the University of California, Santa Barbara where they will have to pit their $800 robot, built out of PVC piping and nicknamed ‘Stinky,’ against teams with arguably more talent, confidence and community support and most assuredly more financial aid.

The end result of said competition is a foregone conclusion since there’s now a film based on the story, but in getting there the journey really has to be seen to be believed. Spare Parts falls back on trope after trope but it’s not doing this to intentionally harm anyone’s image, least of all those of the student subjects. If anything — and here’s a more cynical way of considering the production — this is a career-booster for the Californian talk show host who has made a habit of providing ridiculous faces and fluff commentary on his show Lopez Tonight. Here he is putting in substantive work and it is appreciated. The actors portraying the students leave a stronger impression than Lopez, though and are the real stars of the show. Convincingly portraying the utter despair and turmoil that their individual situations have thrust them into, these relatively undiscovered actors will hopefully pick up some more work later on down the road.

Richard Wong’s gritty and saturated color palette tends to flick the dirt and grime of the Phoenix area in our faces with an effectiveness that might overshadow any other element present here. This world looks and feels real; intimate and often dimly-lit settings emphasize serious overtones that are otherwise frustratingly undermined by cringe-inducing dialogue and contrived plot development.

Spare Parts manages to sustain its enthusiastic spirit and reverence for not only Joshua Davis’ excellent in-depth examination but the team itself. It is a joy to see a visual interpretation of an extraordinary chapter in this Phoenix-based school, a school that has since gone on to receive global recognition for its technical achievements. However, that’s nothing compared to what these trials and tribulations have done for young Oscar, Lorenzo, Cristian and Luis. How do you not applaud these kids.

Recommendation: An uplifting family drama through-and-through it’s difficult not to root for Spare Parts. It’s full of heart but also filled with a lot of things that could have been done much better to limit the eye-roll factor. And why, again, does Marisa Tomei have to be relegated to such a restricted role? Ugh. I’m getting tired of this; she’s better than this! Or, maybe not? Cliched or not, this is a story that does deserve to be watched. I give it one-and-a-half Roger Ebert thumbs up (one of my thumbs is like, turned sideways . . . or something).

Quoted: “They’re not adults, they’re kids. Every day in a hundred ways they are told they are worthless. . .”