Welcome boys, girls. . . . and all others, to another sappy, tear-filled romantic edition of Throwback Thursday. (I know, gross, right?) The whole idea behind today’s post is about being subtle. . . . . . as subtle as a 40-foot-tall iceberg protruding from the chilly North Atlantic water. As subtle as that scene where Jack paints a picture of Rose. With Valentine’s Day right around the corner, I know all of you are just chomping at the bit to read something mushy and heartrending. (I know I am!) Well, you certainly get it here in James Cameron’s preposterously successful, epically-imagined, prodigious smash-hit, a.k.a.

Getting that sinking feeling since: December 19, 1997

Like an aftershock ripping through L.A. the power of James Cameron’s great water-bound tragedy strikes me today with a force seemingly laying dormant since my first viewing. When I was a wee lad and watching this gigantic mess unfold for the first time (‘mess,’ in this case being a huge compliment) I am pretty sure I hated Titanic for its prioritizing of love over visual spectacle. I wasn’t into critiquing movies of course but I already resented Cameron for turning what I saw as a simple disaster film into a needlessly saccharine romantic epic.

Ah, behold this wonderful thing called hindsight. I would never have described the whirlwind courtship between Jack Dawson (Leo) and Rose Dewitt Bukater (Kate Winslet) then as genuine, truly tragic, or even ‘good;’ before puberty hit me like a ton of bricks I was frequently annoyed by sappy stuff on TV and in films and would just as quickly dismiss the love angle as stupid and pointless as I would the overall experience as a waste of my time as well as of its own potential. Looking back, that’s just too dismissive. I realize now that the only valid argument I do have against this iconic work has everything to do with the movie running over three freaking hours long. It was one of the first films I was aware of actually having its own intermission. (There’s a throwback for you.) 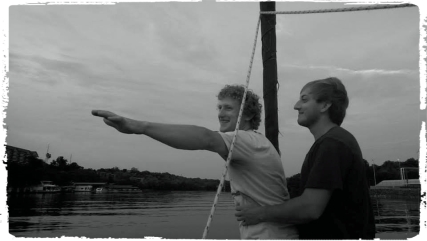 Silly little Tom — Titanic wasn’t a movie; it was an experience. Accidentally or not, it burgeoned into an industry unto itself. Back in the day you couldn’t hold a conversation without being obligated to eventually talk Titanic. Those who were opposed, either ideologically or merely put off by its overwhelming popularity, seemingly had more on their minds than those who went with the explicit purpose of getting their Romeo and Juliet fix. Simultaneously one of the highest-grossing films of all time (adjusting for inflation, it ranks fifth behind cinematic trivialities like Gone with the Wind and Star Wars), and doing battle with William Wyler’s Ben Hur as one of the most Oscar-friendly films ever made, taking home 11 of its 14 potential golden statues, Titanic granted its Captain passage into the theretofore uncharted waters of the billion-dollar club in terms of worldwide gross. Statistics sort of speak for themselves though, so what about the emotional state it left us all in? (Now I can say ‘us’ because I too am a believer.)

I’m only now coming around to accepting that what the young starlets accomplished was indeed a good thing for this world, and I can’t imagine what it was like for the ’90s teens swept up in their own fantasies of being with the then-Hollywood heartthrob in those frigid North Atlantic waters. How they would gladly take his place in the water. Or at the very least, help him climb on to the door (come on, that thing is not going to go under with two small people on it). I can time and again look to Titanic for a number of examples that support the cliché how it may indeed be unhealthy to take one’s entertainment so seriously.

When you have Celine Dion belting out a tune at a wine glass-shattering pitch I guess I shouldn’t be taken aback by the phenomenon of entire blogs being devoted to Jack and Rose. Is there any more damning evidence of me softening in my late 20’s than the fact that her voice, those lyrics, rather than annoying me actually haunt me? There’s (and yes, I’m going to say it) something epic about her song, some part of it that has never quite left my body since I first heard it as that wee lad. I can’t recite much beyond the chorus, but seriously — why does that matter? It’s impressive that after all of this time passed, there are elements and aspects to Titanic that I’m finding more and more intriguing, and more crucial to the general health of romance in contemporary film.

There’s a reason the passionate romance outweighs the sinking of the ship. Jack and Rose living on in cinematic infamy, their reward for being so damn good-looking and inseparable. Superglue fails to provide the kind of bond that these two were able to form and in such a short amount of time. I suppose jealousy and envy could apply to me as a youngster when I watched these two steam up a car window and proceeded to fast-forward though this bullshit, though I think it’d be more accurate to say I just didn’t appreciate the gravity of this blossoming romance. Now, I can’t see another duo encapsulating, at the very least, the sheer joy of being young and carefree out on the open waters. No two performers would be Jack and Rose like Leo and Kate were Jack and Rose.

I’m not sure what you call it when a ship pulls a total 180 in the water and heads back in the opposite direction, but that’s exactly what has happened with my outlook on this voyage. There’s style and beautiful cinematography to ogle over, but these things I’ve never had an issue with. Titanic looks and feels classy in every way it possibly can. But today Cameron’s decision to place the star-crossed lovers front-and-center has finally struck me as not only appropriate, but creative. It’s the only way to bring millions of viewers on board the ship, as well as into the lives of many a doomed seafarer who had plans of arriving in the Big Apple.

Recommendation: A tragedy of R.M.S. Titanic-proportions, James Cameron’s vision just has to be applauded. As if I need to endorse this thing. Seriously? Why is this the second film in a row here where I pretty much don’t need to write anything in this section? Actually, it’s kind of nice. I don’t have to do this extra work now. Cool.

TBTrivia: After finding out that she had to be naked in front of Leonardo DiCaprio, Kate Winslet decided to break the ice, and when they first met, she flashed him.