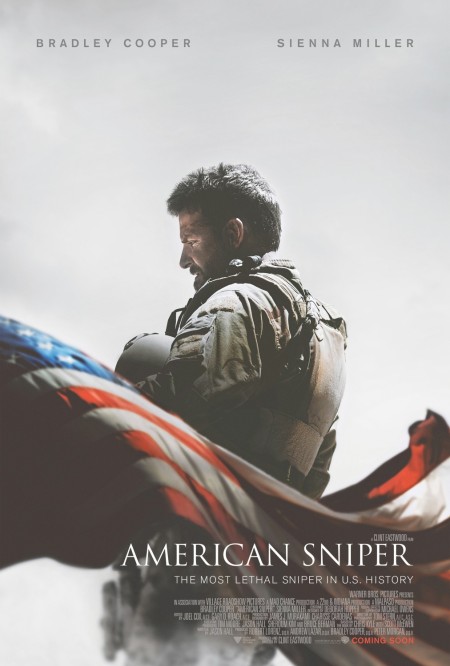 In Dirty Harry’s return to slightly more confident filmmaking, Bradley Cooper is one bad man. I mean, his Chris Kyle is a good man, but a bad . . . ah, never mind.

The Odessa, Texas native is the center of attention in a biopic entrusted to one of the biggest names in the business, but somehow the math just doesn’t add up. Cooper may never have been better, Eastwood never more patriotic, yet American Sniper is a slog and somewhat this. Somehow, following along with Chris as he leaves his family on four separate occasions to go fight against insurgents in Iraq between 1999 and 2008 feels less inspired as it does repetitive. Eastwood’s style here may suit the subject but perhaps it’s the subject that doesn’t really lend itself to major blockbuster filmmaking. Why do I smell a missed opportunity for a heartbreaking documentary here?

There’s another issue at play, one that isn’t necessarily the film’s fault, but absolutely is worth mentioning. American Sniper falls victim to its trailer, a tense two minutes that can’t help but fess up to Eastwood’s most sincere depictions of the kind of pressure that rides on snipers as they determine whether or not to take that shot. I do understand it’s not really fair to judge the film proper on a particularly revealing piece of marketing; after all, one could theoretically ruin their Interstellar experience by watching those clips of Gargantua too many times. But it’s so easy to do just that here, even if there aren’t any black holes in the Middle East. Far be it from me to tell you how to consume your entertainment but if you’ve watched the trailer for American Sniper then you are privy to virtually as much information as those slapping down $10-12 for tickets at the box office.

Eastwood’s directorial touch doesn’t help matters as he provides only a cursory look into the domestic life of an increasingly despondent soldier. A thoroughly masculine figure to begin with, Chris’s former life as a cowboy is halted abruptly by his interest in contributing muscle to the American cause after seeing a story about recent terrorist activity in the Middle East on T.V. He is motivated to the point of signing up for the Navy SEALs, though he is initially rejected. Some indeterminate time later he comes across a gorgeous brunette at a bar. Jason Hall’s script affords a modicum of humanity to this soon-to-be relationship, a level that is somewhat respectable. Sienna Miller would be compelling as housewife Taya but the switching back and forth between Chris’s duties in Iraq and her location in sunny Texas leaves a lot to be desired.

What’s more concerning is that Eastwood’s lazy construction makes mundane the soldier’s return(s) to Iraq. Aside from what’s easily observable — the escalation of violence during each subsequent visit, and the fact that a bounty is put on the head of the most deadly sniper in American history — Tour One looks just like Tour Four. Perhaps that’s how it really is. I have never served; I cannot talk at any great length about that. And I want to be careful in describing how I feel about these sequences as I don’t want to give the impression I don’t respect what multiple tours mean to those who have undergone them. From strictly a creative standpoint, American Sniper wears out its welcome and begins firing blanks much too soon.

Scenes built entirely out of fist-clenching tension, however, do not wear out theirs. And as a corollary, the violence Chris is perpetually surrounded by — and that which understandably upsets Taya the most — is an element Eastwood appears comfortable handling. I guess such is his duty. Reduced in intensity as they may be thanks to the trailers, the hair-raising shoot outs play a large part in defining Chris as a sniper, as a soldier, as a human being. More importantly it gives the film’s version of Chris an obstacle to get over, an enemy if there ever were one. Widely regarded as the “legend” of the Iraq War, his estimated 160 kills via sniping from obscure rooftops function in the film as not simply a plot device but this character’s responsibility to country and to his fellow soldiers. The film does a wonderful job of emphasizing the sniper’s compassion in a time and place where such a quality is rare if existent at all.

It’s the kind of reverence you can easily tie in with Eastwood’s emphasis on fatherhood and the paternal instinct, both evident in his prolific career as a filmmaker in both acting and directorial capacities. It doesn’t factor into American Sniper as much, though the opening scenes featuring Chris with his father together hunting deer in a forest tinged golden from the low angles of the sun’s rays suggest he is still concerned about constructing a layered character study. It’s yet another interesting angle overshadowed by the director’s predilection for predictable story structure.

There’s nothing offensive about the way Clint Eastwood, himself a legend, has put this story together. American Sniper is just not the most interesting version that could have been told, nor is it the most original. Like Sienna Miller in that black nightgown of hers, we wish we could have been shown more. The more testosterone-filled among us anyway.

Recommendation: Clint Eastwood wears his patriotism on his sleeves and Brad Cooper wears Extra-Large in American Sniper, a very average war film centered around a not-so-average American finding his life’s calling. Between Cooper’s dedication to his character and Eastwood’s devotion to exemplifying courage and obsession in equal measure, the film is not something you should miss if you have served any amount of time overseas (or at home — just not in prison, of course). For everyone else, this is going to be one of the best uses of Redbox/Netflix you’ll have in a while.