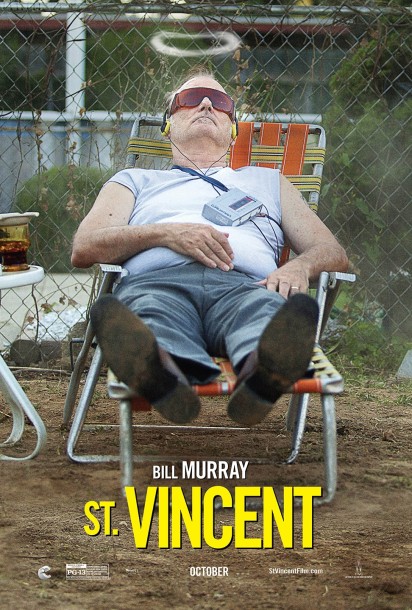 In St. Vincent Bill Murray is the sort-of-bad guy, and Melissa McCarthy is the sort-of-saint. The role-reversal almost seems self-congratulatory it’s so overt. But does that make this comedy a bad movie?

That largely depends on how you define ‘a bad movie.’ That nine-letter phrase can imply so much. So let’s, before the headache, establish that ‘bad’ in this case translates as lazy; predictable; easy. In which case, you might as well stick a fat check mark in that box. St. Vincent rests on formula when it’s strongest and tugs violently on the heart-strings when all else fails. Had it not been for solid performances (I suppose here’s where I could include ‘predictability’ within the parameters of ‘bad movie’) this unapologetically manipulative and downright boring affair would likely be one of the year’s biggest letdowns.

Bill plays a curmudgeon named Vincent — a veteran of some war (let’s call it the Vietnam War — that’s the one where American troops were appreciated the least, right?) who these days is more comfortable with a bottle of whiskey in hand rather than a woman. But he’s not completely stupid. He makes sure to exude the one other classic symptom of hardened-vet status: a fascination with ladies of the night. In particular, it’s this Daka girl — I can only hope Naomi Watts isn’t usually this annoying — whom Vincent is taken by. He manages to scrape by with a pack of cigarettes and his shitty home cooking and makes regular rounds to the horse track to pay off whatever debts he owes to whomever it may be.

Oh yeah, that reminds me: Terrence Howard is in this.

Vincent’s ability to wall himself off from everyone becomes a character defect best disposed of when the script calls for it; i.e. when young and earnest Oliver (an undeniably excellent 11-year-old Jaeden Lieberher) needs a place to hang out for a few hours while his hard-working mommy (McCarthy) slaves at the hospital to pay the bills after moving to Brooklyn in the wake of a nasty divorce. Credit needs to also be given to McCarthy who, for the first time in some time, seems to be caring about what she offers a film. She’s fantastic. She’s the rock currently holding the two together as she staunchly defends her right, as a good and basically decent human being, to entrust another person to look after her son while she tries to fix things at home.

Too bad her mistake was to loan the babysitting reigns to next-door-neighbor Vincent. After all, isn’t he a man still trying to make things work with a stripper? In a series of “unlikely” events — made actually quite likely given the grouch’s understandable routine of bars, booze, and race track backtrackings — the man and the boy grow into a weird friendship of sorts. Again, this is at the behest of this script. I see no natural development here. (Nor do I have much inspiration to go back and find it, either.)

While enrolled in a private Catholic school, Oliver is asked by his teacher (Chris O’Dowd) to find someone students know, or know of, who may have qualities befitting a saint. Well gee-golly-willickers — I wonder who our fearless Oliver is going to pick? Surely not the bastard who once guilt-tripped his own mother into paying for the fence (and the fucking tree branch) that the moving company she hired was truly responsible for destroying. Yup. That’s the one. Yeah.

In the same way I’m willfully dismissing St. Vincent as a hollow exercise director Theodore Melfi is trying to prove his production has depth; originality. It relies heavily on Bill Murray to provide the gravitas, Melissa McCarthy the humor, and the child actor the quotient of precociousness a film like this needs to survive. Well you know what? It all just fails. Nothing about it seems saintly or even vaguely redeemable.

Recommendation: I really don’t recommend this to many. For fans of Bill Murray, go watch Ghostbusters; pop back in the Caddyshack DVD; Moonrise Kingdom; hell, go re-watch Space Jam for something that better showcases his talents. Just stay away from this if you’re thinking all things Bill Murray. Unfortunately I’m in a bit of an awkward position because Melissa McCarthy is indeed saintly here. She’s great because she offers a great counter-balance to the permanence of Vincent’s depressive state, which is something Murray sells to great effect.

Quoted: “A saint is a human being we celebrate for the sacrifices they make, for their commitment to making the world a better place.”