As the ruthless Carmine Falcone once told Cillian Murphy’s Dr. Crane in a particularly insightful moment during Batman Begins, “some days, some days just go bad.”

Indeed it does for one Alexander Cooper and his extraordinarily ordinary family. The day before his twelfth birthday, he experiences a series of misfortunes that make for a very bad day. He starts off the day with gum in his hair, which he cuts out himself, then heads to school where more disaster awaits. Alexander finds a way to embarrass himself in front of the girl that he likes (as well as his entire science class) when he accidentally lights her notebook and half the classroom on fire. But the day’s not over yet. When he gets home he mishandles his baby brother’s pacifier and drops it down the garbage disposal, mangling it.

That night, as he blows out candles on the birthday treat he has made for himself, he wishes that the rest of his family — who were largely indifferent to his complaints at the dinner table earlier — would experience what it’s like to be him for just one day. He blows out the candles and the moon rises to take the sky, all cliché-like and shit.

Alexander and the . . . my goodness that’s an exhausting title . . . isn’t the kind of comedy most people flock to for the star talent, though the cast is no slouch. The Coopers are headed by hard-working mom Kelly (Jennifer Garner) who’s eying a promotion at the publishing company she’s been working with for some time; and recently laid-off dad, Ben (Steve Carell), who’s just landed an interview with a gaming company.

Beyond Alexander (Ed Oxenbould) there’s big brother Anthony (Logan Lerman. . . er, rather, Dylan Minnette) and Emily is the in-betweener sister (Kerris Dorsey). The aforementioned are amusing in equal measure, yet the real highlight of the show should be baby Trevor (there’s those adorable Vargas twins again, Elise and Zoey) who has a green mouth for most of the episode. That these people are naturally funny and these characters come across as good, decent people gives weight to the low-brow ambition of this adaptation of Judith Viorst’s 1972 novel of the same long-winded name.

Modern script aims at recapturing the essence of the short children’s book, and at only 81 minutes in length, one’s led to believe there isn’t a great deal of deviation in the narrative. Director Miguel Arteta (Cedar Rapids; Youth in Revolt) maximizes old-school slapstick appeal and takes a keen interest in the concept of Murphy’s Law. What can go wrong, will go wrong and for these poor people, quite literally everything does. The parents wake up past their alarms on the morning of Kelly’s promotion and Ben’s job interview; Emily wakes up with a fever and Anthony goes on to fail his driver’s test which he had hoped to pass so he could drive his date to the prom that night.

When the wheels really fall off the wagon is when the diminutive little audience is likely to find this film at its most fun and for the adult portion, at its most ridiculous. Clearly the screenwriters cherish the anarchistic set-up. It’s evident in the giddy energy the entire cast summons as they wake up the next day, direct recipients of Alexander and his wishes for them to have a terrible, horrible, no good, very bad day. But does it really work out that way for the lot of them? That’s why you should watch and find out for yourself. 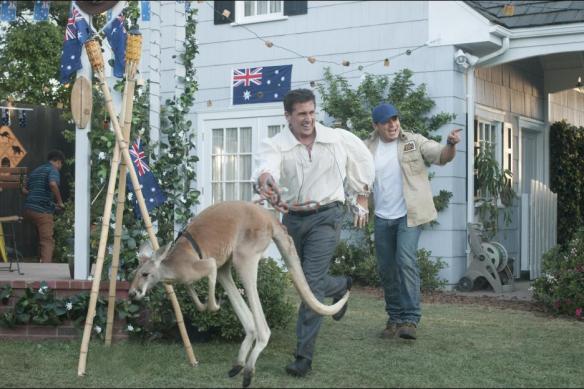 Recommendation: If you’ve had a terrible day, here’s something you should see to get your perspective on. The movie is predictable, dumb fun. Of course there’ll be massive compromises made on the part of any parent willing to take their kids to see this as there isn’t much for more matured minds to latch onto here. That said, this is, simply put, good old-fashioned harmless fun. It features solid PG-rated performances from its A-list leads and even some decent ones from the young folk. I actually really enjoyed this silly farce, probably more than I should have as a late twenty-something.

25 thoughts on “Alexander and the Terrible, Horrible, No Good, Very Bad Day”