As much a gorgeous postcard from the Icelandic coast, Land Ho! also serves as a warm, sentimental comedy about taking advantage of time we can almost measure out in handfuls. In a perpetual disappearing act, it is a hell of a precious thing.

Fittingly, this neat and trim 90-minute package is mindful of that fact. Land Ho!, the cumulative effort of co-writer/directors Aaron Katz and Martha Stephens, neither taxes viewers’ patience nor does it overwhelm the senses unnecessarily. Conversely, you would also have to be knocked-out cold to not appreciate the pragmatism on display — there are no frills here. Growing old may be the natural way of things, but it sure ain’t easy, as this geriatric odd-couple will attest.

Meet loud and audacious Mitch (Earl Lynn Nelson) and meek and mild-mannered Colin (Paul Eenhoorn), formerly brothers-in-law but recently removed after Mitch’s sister divorces Colin, an occurrence that happens before the film starts rolling. We first see the two convening at Mitch’s humble abode where the two catch up after whiling away many an hour on their lonesome. To get Colin’s mind off of things — not only has he recently been divorced, his wife prior to that passed away much too soon — Mitch has a trip to Iceland planned where they will get away from everything.

The goal is complete detachment from their former selves, to openly embrace whatever comes next. In a sense, this is a send-up of a desire to live fast, die young and worry about the boring stuff we missed later. The irony’s captured in all aspects of this adventure, especially with a 60-something-year-old Mitch whose number one priority seemingly is getting laid. But really though, shouldn’t it be these older gents who earn the right to openly embrace “YOLO” as an actual fact of being?

Earl Lynn Nelson, in his break-out performance is an infectious spirit that perpetuates Land Ho!‘s energy and boundless optimism. He is positively compelling as the geriatric go-getter, even if his commentary at times can fall on the side of sleazy when it comes to talking about women. On offer as well are breathtaking vistas and an absolutely sublime soundtrack, but the chemistry between the pair of “elderly” men reigns supreme. (Although, it’ll be difficult to exit the theater without humming some of the tunes that also happen to strengthen this picture via being laid over several richly visual interludes. Likewise you’ll be forgiven for immediately Googling Iceland when you return home from seeing this one.)

Beginning at the capital port city of Reykjavík our map sprawls outward, encapsulating some classic tourist destinations like the black sand beaches, towering geysers and of course, the hot springs as made famous (and slightly dramatized by) this particular movie poster. Our protagonists make friends with a few locals: a couple who are honeymooning in the quaint bed-and-breakfast Colin and Mitch are inhabiting inadvertently become the direct recipient of Mitch’s advice on successful long-term marriages. Meanwhile, Colin strikes the iron hot with a Canadian photographer while taking a dip in the hot spring-fed rivers nearby Landmannalaugar.

While conversation strictly adheres to matters of practicality and even fatalism — the duo’s rumination on loneliness and wondering where this path ultimately takes them very much mirrors our own — atmosphere and musical selection will distract just enough to never allow the moment to settle too heavily. At times Land Ho! possesses an air of fantasy, as its almost too difficult to believe the turns of fate these two share.

Yet the laughs spill forth freely and come at times at the expense of these good people. Sight gags are in abundance, as are those of an intellectual, buy-into-the-rapport variety. We experience a range of emotion in good old Colin who eventually learns to embrace his surroundings. Watching him cave and take a hit off a joint the size of something Bob Marley would roll isn’t exactly revelatory but it’s the kick in the pants this character needs. There’s also somewhat of a comfort in knowing this would happen sooner or later. Yes, extensive character development is something you will not find but the changes that occur are sufficient enough.

In the end, you must embrace this film in the same way Mitch is embracing a new life as a retired doctor; as Colin, a wounded soul still reaching out for something to make him strong. Dispense with the over-thinking and just go with the flow. I’m not exactly sure how that applies to your viewing habits or how you approach this film but the less you think about Land Ho! and its constant retread of the tracks laid down by road trip movies that have come before, the better you will be for it. 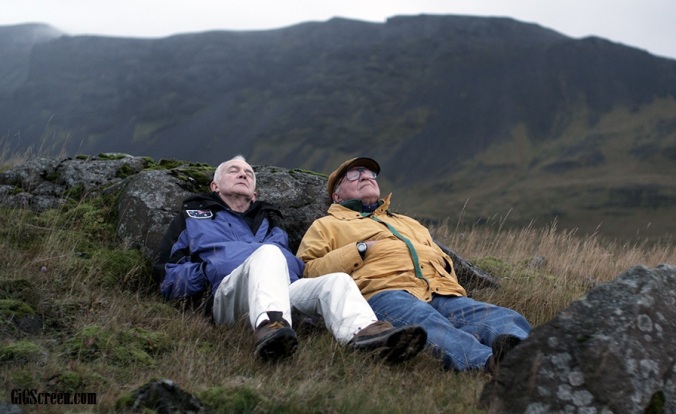 Recommendation: If searching for truly unspoiled territory, the quiet musings of Land Ho! will not be the trip you need to take. Avoiding it on that basis is a choice that will dismiss this film entirely too prematurely, however. You should see this film for a stellar first lead performance from Nelson and the absolutely killer scenery he treads across with his bestest buddy. Its thematic presentation is perhaps a tad overwhelmed by said gorgeous visuals, but I find that one of the most acceptable issues to have in a film.

Quoted: “You know that a lighthouse looks just like a hard cock but with no balls. . . ?”