Careful with that trigger finger, Devereux.

The old adage ‘the more things change the more they stay the same’ is likely to surface in several forms here in my explanation as to why I think Pierce Brosnan doesn’t really owe us an explanation for the mess that is The November Man.

After nearly a decade removed from the spy game, the unapologetically good-looking Irishman may have added some gray whisks to his quaff of brown hair, but at the end of the day he’s still getting a job done that needs getting done. Duly aware that time is getting on, Pierce, also operating in a producer capacity, has turned up the intensity and bid adieu to romance in this considerably more aggressive role as Peter Devereux, a ruthless CIA agent who knows how to deliver physical punishment as well as a compelling reason to watch for his next move, even if everything else surrounding him doesn’t.

His latest escapade, based upon the novel There Are No Spies — the seventh book in a series titled The November Man — opens chaotically, as a botched mission in Montenegro leads to his brief retirement after his partner and agent-in-training, David Mason (Luke Bracey) disobeys direct orders and winds up killing an innocent bystander on the streets in a confrontation unnecessarily made public. Such unprofessionalism draws a divide in the ideals between the old-school agent and wide-eyed trainee eager to prove his skill set.

Following the debacle Devereux swears he’s done and takes off for Switzerland to enjoy a quiet life running a coffee shop. Sorry, but pristine Alpine peaks without any of the parleying is a pipe dream for you, pal.

Don’t forget, old habits die hard, especially when you’re this good at being typecast. Even better, when you know you are this good at being typecast. And Brosnan does. When former boss Peter Hanley (Bill Smitrovich) comes knocking, he hardly balks at the task of finding and protecting a fellow CIA operative whose safety becomes jeopardized after exposing secrets about Russian presidential candidate and former Army General Arkady Federov. When she loses her life in an ensuing sequence of conflicting orders that have Hanley ordering Devereux to protect her and CIA Station Chief Perry Weinstein (Will Patton) dispatching David to take her out, a stark idealogical divide forms between both trigger fingers.

Neither expecting the other at opposite ends of the barrel in the aftermath of this second botched op, they flee in opposite directions and the actual narrative, as it were, finally has a chance to get underway. Devereux’s ultimate assignment is to protect a third innocent from destruction at the hands of another vile man. This will be in the form of an Alice Fornier (Olga Kurylenko).

If, by chance, you have reached this point and find your head spinning, you’re likely not alone. There lies a complex web of characters and relationships to explain and not even the film’s up to the task. It can’t prioritize which relationship is more important. Ultimately, few of them are interesting on their own merits. They are helped by a relatively compelling and violent CIA agent coming into contact with them.

We dip in and out of sun-tinged locales often in exciting bursts of action. Roger Donaldson demonstrates his understanding of shooting chase sequences and tension occasionally rises to nearly unbearable levels owed to some interesting camera angles and quick, anxious cutaways. The film teases palm-sweating good fun but never outright offers it as it spends too much time setting up too many characters when it could have limited its periphery easily. A Russian assassin whose personal mission is to wipe out Alice is only one example. (No, you’re not getting another.)

Somewhere along the way Kurylenko becomes entangled in this convoluted scuffle between American and Russian government agencies via a thankless role as the aforementioned Alice, whose history renders her a very important character but whose personality suggests otherwise. The lovely Kurylenko does the best with what she’s given but the end result of seeing her in The November Man inspires only vague recollections of her involvement with Quantum of Solace.

So I’ll say it again: the more things change, the more Pierce stays the same. Despite his character sporting an attitude more befitting of an anti-hero on more than one occasion, at the core there’s still a palpable sense of the actor relishing what he does for a living. I won’t deny the power of his tougher outfit but I just wish there was a way to explain why the script could not be better here. And no, Devereux doesn’t need to offer up anything. 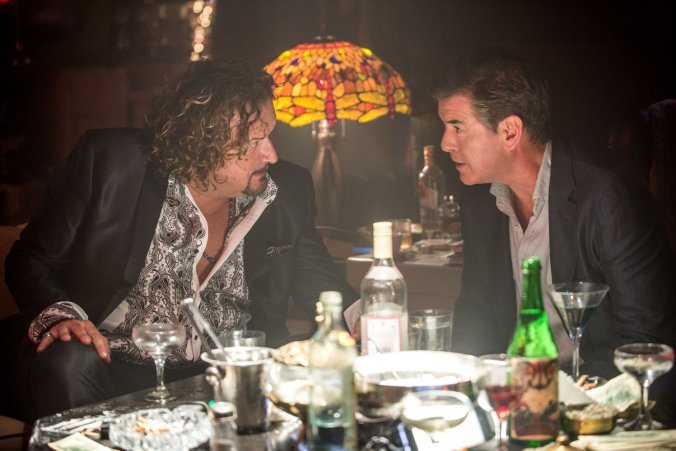 Recommendation: Not the best outing for my boy Brosnan by any means, but this doesn’t rank amongst his worst either. He is undoubtedly why this movie’s going to get rented out (if my screening was any indication, there certainly weren’t many keen on checking it out in theatrical form), and perhaps some may recognize the actor-director pairing from Dante’s Peak. That might be worth something as well, but suffice it to say if you’re expecting the script to improve or likewise the characters from that one to this, you’ll be left more shaken than stirred.

Quoted: “Peter Devereux. You are one bleak motherfucker, you know that? You know what we used to call you? The November Man. Because after you passed through, nothing lived.”

13 thoughts on “The November Man”