Well today, I went from this to that, and that to this and that to that and finally from this to this. It’s been a struggle. While all this dilly-dallying is going on, there are kids going back to school. Or college students preparing to do so. For those people I spare no sympathies because I too was once there. I was once lugging around unreasonably weighty backpacks filled with textbooks I barely cracked all semester. I was once a freshman, riddled with pimples (ew). I was once a senior slowly but surely accepting that all of this — this façade that had come to define who I was for this part of my life — was no longer my reality. Here’s a throwback that actually still manages to recall some of those feelings. This isn’t by any means a technically accomplished movie, but it’s still

Ladies and gentlemen, meet Bartleby “B” Gaines (Justin Long), a high school graduate falling perilously short of not only his own standards of who he ought to be (or — and how’s this for nursing those cliché withdrawals — who he is destined to become) but those of his parents as well. Bartleby is kind of falling behind as compared to his graduating classmates, and it probably doesn’t help much that he’s named Bartleby.

With frustration and pressure mounting — his parents nagging him at every second, begging and imploring him to get into a “good school” (as all loving and devoted parents ought) and his miss Smarty Pants sister egging on his fears about never getting into college — B finds very little comfort in the fact his other friends are off on a good foot, many of them getting into the first college they applied to. Left in the dust, B comes up with an off-the-cuff plan to establish a fictitious school, one in which walk-ins can sign up for any class as if it were a public health clinic. Classes they so desire in order to set foot on a path that is uniquely their own, and one constructed for their own individual brands of success. How quaint!

That Accepted is plastered with sentimentality and dick jokes — a really weird mix, bro (kind of like vodka and cat food. . .trust me, don’t try it at home) — won’t surprise anyone who happens upon the title and then chooses to embrace its contents. Everything about the process of Bartleby accruing a group of unlikelies for a common cause screams cliched and unoriginal. And that’s precisely what this is. But we aren’t meant to use our heads for this hysterical interpretation of the drafting of high schoolers into institutions of higher education. We’re meant to sit back, laugh and enjoy time going by. That’s a task made easier by certain presences in this film, in particular Lewis Black. And a task also made more difficult by director Steve Pink’s incredibly low ambitions. What could have been a film devoted to revealing the painful truth about the realities of colleges accepting more applications than they have spaces to fill, instead devolves into a raunch-fest filled with overhyped sex, drugs and rock-and-roll jokes.

I wish I were just being cute with that last line. Unfortunately all three of those boxes get ticked with no degree of shame, with a Steve Buscemi-look-a-like fulfilling the rock-star student quota (random). Accepted is a terribly lazy movie, a rehash of several other similar films whose perception of the world may not be any more healthy but are certainly more well formed than this. For the very definition of contrived is now spelt S.H.I.T. (South Harmon Institute of Technology, the fictitious community college B drafts up in an effort to show his parents he is actually attending school and not just. . .yeah, making them up off the top of his head).

Accepted gets high off of making a mockery of the college application process. It features a group of mis-fits — they are unsympathetic in this way as none of our central characters are particularly charming or even likable —  that includes Long’s “B;” (chubby) Jonah Hill’s Sherman Shrader; Maria Thayer’s Rory Thayer (hey, she used her last name!); Columbus Short’s ‘Hands’ (which isn’t nearly as perverse as it may sound); and of course, the token stoner dude, Glen (Adam Herschmann). . . who is conceived of as the dumbest person possibly on this campus. What is his major malfunction? Inhaling too many pot leaves, apparently.

This is a comedy that caters to the lowest-common IQ level and has no qualms with sticking it to ‘the man.’ The man in this case, being whoever decided that four-year degrees are the only ones worth pursuing. Steve Pink actually wisely selected Lewis Black as the mouthpiece for this particular viewpoint. His character, Ben Lewis (who happens to be Shrader’s uncle) can’t help but let his mouth overflow geyser-esque on the subject of educating America’s youth today. He always has an opinion and always has to share it loudly with the rest of us. I’m game for that, but not for the fact that no one seems to take notice of his impassioned gimmickry. Every note that Black hits is loud, but rings false. He couldn’t give a shit either. The script dictates that he should at least try.

Yeah, I can’t (and won’t) be the judge here, despite how much this movie annoys me. Extending one’s own educational background, be it for an extra semester or the pursuit of another doctoral degree, is a noble investment of one’s personal time and the film’s core message highlights the importance of staying in school and improving upon one’s self.

That’s good. That’s actually healthy. Unfortunately what Steve Pink et al chooses to do with his material is not. Rather than portraying a rather mature landscape of alternative-education avenues, his film marginalizes the individual seeking an alternative scholastic path as someone who must have something inherently wrong with them. On top of this film being an amateur production, I disagree with this film on principle. It sends all the wrong kinds of messages and for that reason, this film is bothersome. 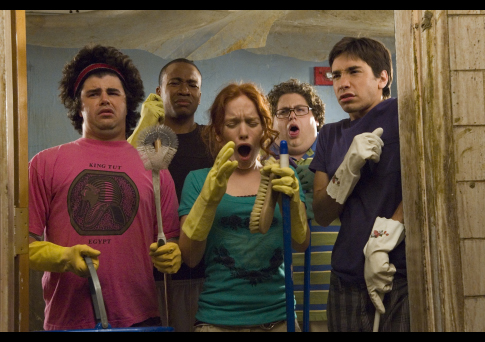 Recommendation: Don’t watch this film unless in the mood for some inane comedy, comedy that works much better in other more fully-developed films of the same ilk.