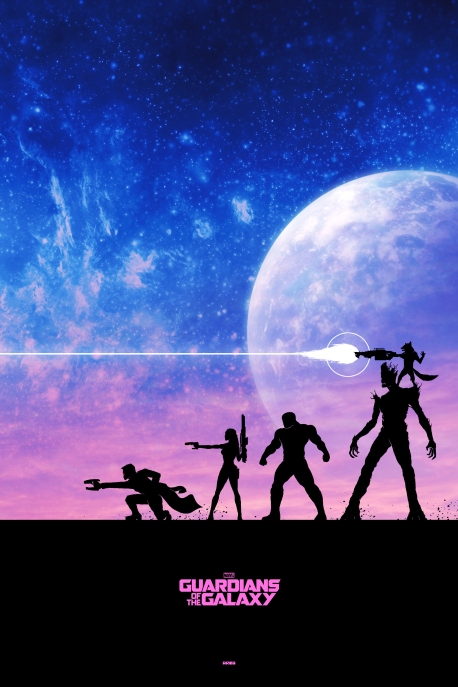 I wish I could say I am hooked on this feeling, but I’m not high on believing that indifference is what I should be feeling right now. Especially for a movie that hasn’t even made it through opening weekend, yet is already being touted as Marvel’s masterpiece.

At the very least, such lofty praise seems just a little capricious given the source material wasn’t widely accepted as anything close to ‘cool’ until about. . .oh, I don’t know what an accurate estimate is — say, two or three weeks ago? Listen, I’m no hipster; I won’t not like Guardians of the Galaxy just for that very particular thrill of not liking something most everyone else, in our universe anyway, does. Sitting in a sold-out showing at 11:45 on a Friday night kind of proves that enough people have invested interest in this, and it’s reached the point where I no longer need to worry about me shouting into the wind with this review. Indeed, it’s more like a hurricane and really, I’m just whispering.

Maybe my fate had been sealed long ago, before this project was even announced. I, like millions, hadn’t known a thing about the Guardians of the Galaxy aside from that one teaser attached to that one Marvel movie. Yours truly was never moved enough to give their comic book roots an exploration. Obscure Marvel to me is not lesser in quality, its just more obscure and interests me, personally, less.

As such, I hadn’t received the proper introduction to any of these characters. Forgive me, but Chris Pratt’s recent success in The Lego Movie isn’t quite enough to make me want to go shouting the fact his next character’s name will be Peter Quill/Star-Lord from the rooftops. Nor is Vin Diesel’s muscular physique as ironic as it maybe could have been if I knew Groot before. This kind of unusual casting certainly pops the characters up off the page from one-dimensional drawings and into three-dimensional bodies, but I’m emotionally invested in their plights insofar as the music is shoehorning my feelings in, one classic ’70s track at a time. In other words, the story structure is pretty manipulative.

The picture begins inauspicious and in a Missouri hospital room as Peter’s mother lies on her deathbed, making her last wishes known to a small group of family and close friends. Peter, unable to deal with everything, runs outside where he is quickly abducted by — and get this — a band of space pirates known as the Ravagers and who are led by a very blue dude named Yondu (Michael Rooker, hamming it up nicely). The Ravagers “raise” Peter, though Peter doesn’t allow much of the miscreant creatures’ general shittiness to rub off on him, though early on in the movie he’s a far cry from what he will become. Peter indeed has an arc and he does improve as time goes on, never stooping to the level of the likes of Yondu and his redneck friends. (Yes, there are even redneck aliens on display.) He spends his time roaming the galaxies, bedding multi-colored women and stealing. .  .things. Hardly a noble life. His journey becomes slightly more interesting when he discovers a small round object, whose power he clearly is ignorant to.

This, the infinity stone, will be responsible for magnetizing the film’s meandering plot from one corner of the galaxy to the next, as Quill and a ragtag group of other equally curious individuals attempt to avoid the wrath of the mighty Ronan (Lee Pace), the murderer responsible for the slayings of millions of families throughout the universe. (When I put it like that. .  . . . damn, that’s pretty heavy.) We ought not think too highly of Ronan, though, nor his crazy anger nor his impressive army of ships and bald-and-blue Karen Gillans (still not as sexy as Jennifer Lawrence). Nor the super-jaw of Josh Brolin in his fittingly hammy turn as Thanos, a supervillain with skin the color of Welsch’s Grape Soda. These jerks are just mere bumps in the road in what’s mostly a thoroughly enjoyable, if too casually diverting, journey throughout the cosmos.

Director James Gunn and Marvel studios together go for broke in this spectacularly colorful and silly affair. On more than one occasion the film manages to strike a precarious balance of being simultaneously jaw-droppingly gorgeous and hilarious. Rare are the films that find both pleasures combining against such a dramatic backdrop. Still, it’s hard not to become distracted from much of the epicness. The goofiness becomes a plot unto itself. Between Star-Lord’s nobility post-narrow escape from death, or Ronan’s confusion at seeing said character bust out a few dance moves mid-battle, the film treads an awfully thin line between being taken seriously and being dismissed as comedy.

Maybe it’s late-stage MCU Phase 2 burn-out I’m navigating through at the moment. Perhaps I’m simply lost in Knowhere, scrambling for something that could possibly appeal to my sensibilities in this landscape of comic lore. I guess, shouldn’t the entire movie, because after all it’s all one big inside-joke, anyway. Guardians of the Galaxy was once obscure and now it no longer isn’t. Seems there really ain’t no mountain high enough for Marvel Studios to get over.

Recommendation: I am probably going to be alone on this. May I recommend this one less to devoted fans of the comic than to fans who loved the atmospheres of The Avengers and Thor. Although Guardians does appear to be upping the ante on every front. It’s bigger, sillier and louder than both those films and its far more obscure. I’m not sure where this lands the film in terms of placing it on a scale from Marvel’s least successful to it’s most heralded. I actually do not care. This was such an odd experience, even beyond the source material that it’s hard to really define who this really is geared towards. This is just one to go to if you find yourself curious about what the big deal is all about.

“I’m gonna die, surrounded by the biggest idiots in the galaxy.”

51 thoughts on “Guardians of the Galaxy”