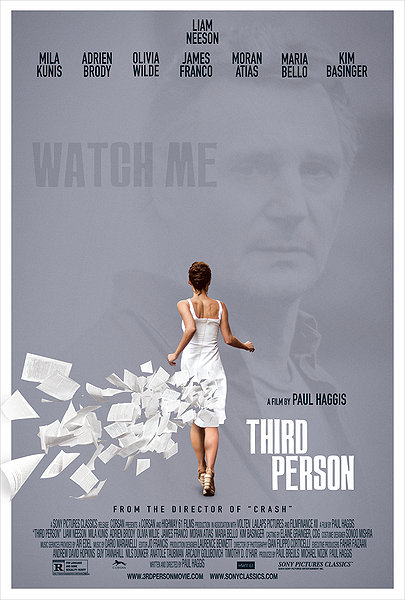 Putting it mildly, Third Person is a rather luke-warm rumination on romance whose title feels fairly appropriate considering how much the content likes to emotionally strand the viewer for over two painfully long hours. In fact the lethargic pace is such that it’s easy to get the impression the director really doesn’t care whether you’re occupying a seat or not.

Clearly working within a certain blueprint, Paul Haggis at best treads water with his latest entry, a trio of love stories taking place simultaneously in Paris, Rome and New York. Whereas ten years prior he was comfortable allowing his cameras to settle on moments of pure and unnerving racial tension in his Best Picture-winning Crash, here his commitment to painting reality like it is just doesn’t feel as inspired. The structural similarity also suggests possible creative burn-out on Haggis’ part, though the recycled formula is less of an issue as the quality of this final product.

What dooms Third Person more than anything is one doozy of a predictable denouement that can be all but seen coming from the film’s opening title sequence. It’s the kind of unimaginative revelation that sends up red flags as to whether Haggis even bothered. It is also the second suggestion that inspires the thought that this was a film made with no real discernible audience in mind. Perhaps its just catering to the audience with the least discernible tastes in romanticism.

Upon this chessboard of troubled relationships Haggis has placed several bland characters, ones slightly improved by the big names portraying them.

Liam Neeson is once again a hardened, scruffy tough man. . .well, a writer. . .named Michael, and Olivia Wilde is Anna, a woman with a dark history. They’re introduced to us in a rather surreptitious manner; indifferent camera angles lingering on a young, beautiful woman and her significantly older, more moody male counterpart passive-aggressively suggests something ain’t quite right with the girl.

The second pairing finds James Franco playing a successful artist, apparently named Rick (at the very least, we learn character names aren’t worth much in this universe), and who is having trouble with an ex of his who had attempted to hurt their son. Spotlight on a Mila Kunis who might not have ever achieved this level of irritating. Not even as Meg. Shut up, Meg.

The third relationship takes place in Rome and blossoms between Adrien Brody’s Scott and a mysterious Romanian woman named Monika (Moran Atias). The two bump into one another at a dive bar, wherein Scott, a clothing designer harboring a disdain for Italian fashion, learns that Monika is on the trail to meet up with her long-missing daughter who was kidnapped by a Russian gangster. Awkwardly ingratiating himself in the woman’s personal affairs from the get-go, this thread might be the most woefully developed and conceived of the three as Brody does his best to force something out of almost literally nothing. Ice-breaker conversation at the bar comes close to inducing an early nap time.

Whereas the other stories experience less boredom, the intertwining scenes that flip between Michael and Anna’s affair versus Rick and Julia (Kunis)’ troubled history instead just cause a headache and a good bit of confusion. One might be able to admire Haggis’ ability to thread the needle in certain spots — his delivery of certain heartbreaking pieces of information do indeed almost break the heart they’re so painful and twisted in their morality — but these brief spurts of brightness are perhaps the only compliments you can pay Third Person — noteworthy or otherwise. More often than not the multiple tiers of varied trust issues add up to nothing more than a rambling, incoherent mess. A more detailed review of it would start to feel much the same.

If 2004 was the Crash, well, we should have been prepared for the burn. 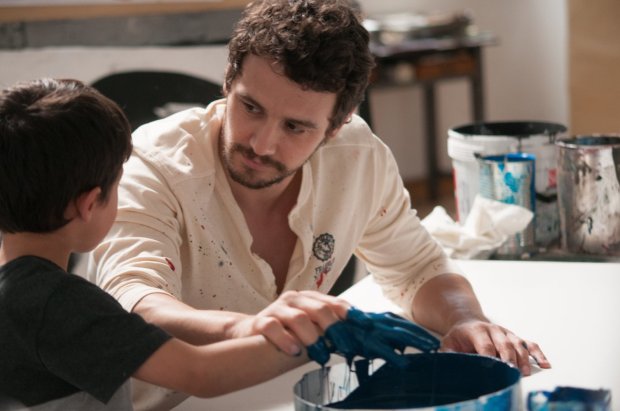 Recommendation: There’s not a whole lot that Third Person presents compellingly. Love stories trend much the same way as the millions that have come before, yet the involvement of three stories punches up the intrigue factor just a little. But if I can recommend this film on a performance-basis, I see no reason to outright say ‘No’ to this. The actors do fine work. But the script and Haggis most certainly do not. May I recommend the rental. . .and then the very frequent scene-skipping to get to the good parts. Which basically involve Olivia Wilde. Okay, okay — and Liam Neeson.