Ernest & Celestine may only be an hour and twenty minutes long, but within such a short time span a world is created that no viewer can possibly walk away from willingly. No, they’ll have to call upon the indie/arthouse theater bouncers to physically remove me from this theater seat! (And. . well, it looks like they are doing that right now so I’ll have to be brie. . . .)

The one word that perfectly sums up this adventure? ‘Adorable’ comes to mind. ‘Warm.’ ‘Fuzzy.’ Yes, these are all good. But the one that really sticks out:

Work with me, people. Onomatopoeia counts, especially if the film in question is an animated feature, because that’s the sound we make throughout most of these things. This one in particular is an English-language version of a French adaptation of a popular Belgian children’s book series. It tells the story of an intrepid little mouse, Celestine (voiced by the young Mackenzie Foy) who melts the icy heart of the big, lumpy bear Ernest (Forest Whitaker).

Neither of the two seem to really fit in to their respective societies: with the bears living above ground, and the mice being relegated to the network of sewage systems below. Each population must fend for themselves in a world dominated by fear and a hilarious misunderstanding of one other. Mice fear bears for bears love to eat mice, but the sheer irony of it is that bears are just as fearful of the little rodents they’d sooner throw their paws in the air and surrender than put up a fight.

Ernest is a poor bear who lives alone and is now having trouble finding any food to survive the winter that is officially upon his doorstep, so he scrounges his way through the local village in a feeble attempt at filling his tummy. Police aren’t having any of it, though, and justice is swiftly brought to the panhandling bear. However, Ernest and his problems aren’t the first things introduced to us. Instead, the film opens up and immediately immerses us in the underground society of mice, where Celestine is settling into bed for another unpleasant night at the orphanage overseen by a dreadful mousekeeper (yes, that’s a term invented by yours truly) mysteriously referred to as The Gray One (Lauren Bacall).

This misery of a mouse likes to tell her children all sorts of horrible stories about the bears, though Celestine is inclined to not buy into them. Her encounter with one in particular will affirm that indeed, not all bears are bad. In fact, they can be quite lovable.

As a member of a society that builds and chews things for survival, Celestine is studying to be a dentist. Her instructor, the Head Dentist (voice of William H. Macy), has taken a keen interest in Celestine, as she hasn’t been keeping up with her teeth collecting like all of the other students. He demands she go out and scoop up 50 in a single night. During this mission, Celestine finds herself in hot water when, in the process of taking a tooth from one bear cub, she is caught in the act and chased out of the house by the terrified bears. She proceeds to stuff herself into a trash can to sleep for the night, where she is later found by Ernest while he’s out looking for leftovers again.

From minute one, Celestine is intent on Ernest forming a different opinion of her, other than the one he probably already has thanks to his being a bear and all. But Ernest isn’t like most and would rather Celestine just disappear not because she’s a mouse but because he’s a grouch and prefers to be left alone. When the two find themselves wanted fugitives after breaking into a candy shop, Ernest has no choice but to put up with Celestine for the time being. He takes her back to his secluded woodland hut, where he at first puts her in the basement. . .below ground, where mice belong.

As days turn into weeks and weeks into months the odd pair’s bond only strengthens, with Ernest slowly warming to the mouse’s presence. . .after his initial reluctance to break the rules. And the little squeaky one is just happy that someone finally cares about her. Unfortunately, while all is bright in Ernest’s neck of the woods, the town has formed a search party (bear and mouse police forces remain segregated until a hilarious scene in which they all meet in pursuit of the pair) to arrest and jail the pair of perceived renegades. The proceeding adventure is incredibly endearing to watch unfold.

Joint directorial efforts from Stéphane Aubier and Vincent Patar ensure Ernest & Celestine is consistently charming, absorbing and gleefully funny. Imaginative use of animation, coupled with the film’s innocuous tone and subject, might make the film seem as if its catering to a young crowd. Yes, the film is relatively harmless, and yet there are larger themes at play here, even beyond the amusing comparisons to the outlaws Bonnie & Clyde. The friendship between the two animals certainly functions on the surface as an odd-couple dynamic. These characters are well-developed and well worth loving.

On the other hand, as the film develops, we see more than a. . e-hem. . .bare resemblance to the relationships in our world that often face judgment — relationships of a non-traditional variety. The beauty of the film is that it’s open-ended in what qualifies for ‘non-traditional;’ defining what these are doesn’t matter, but recognizing the parallel does. This is a concept that children won’t necessarily pick up on while watching mice and bears running around on a beautiful watermark palette. But the allegory is as obvious as a bear caught in a mousetrap. 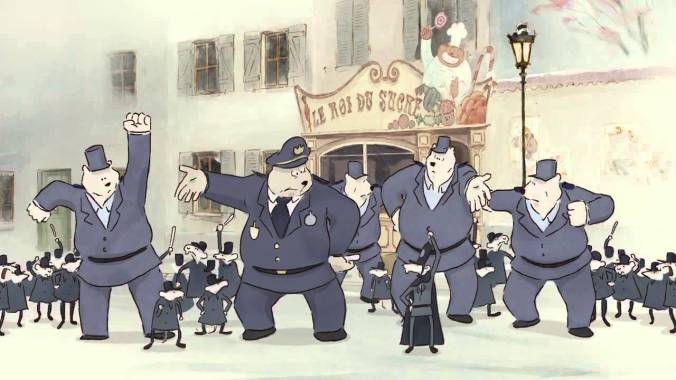 Recommendation: A great little escape that features a terrific voice cast who turn in endearing work. There is no harm in bringing the kids along for a family viewing here, but a wide audience ranging from the single adult to the young married couple truly benefit more from some of the story’s subtler suggestions about coexisting in a judgmental and often misinformed society.

Quoted: “Do you know the story of the little mouse who did not believe in the big, bad bear. . .?”